A Sad Man Cut out All the Women From ‘the Last Jedi,’ and the Internet Can’t Stop Laughing | 22 Words 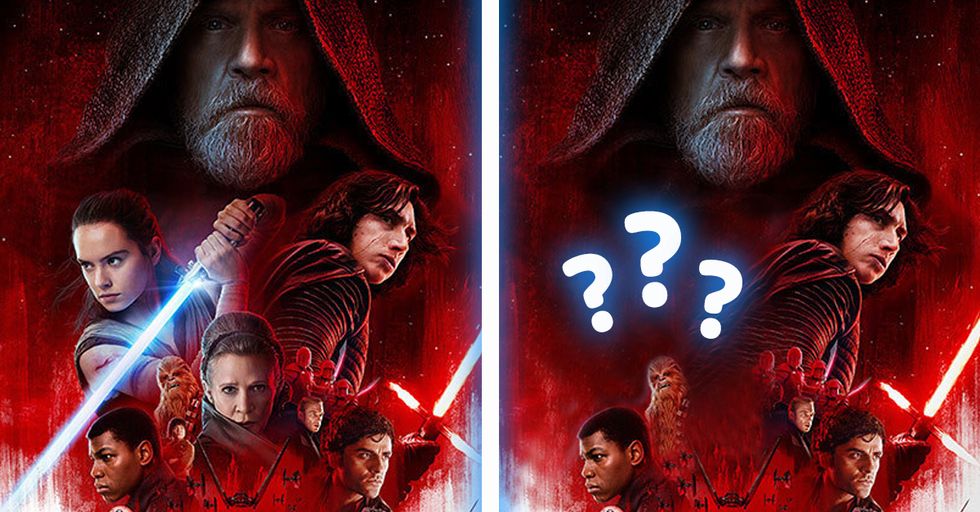 A Sad Man Cut out All the Women From ‘the Last Jedi,’ and the Internet Can’t Stop Laughing

In my experience, people who didn't like Star Wars: The Last Jedi fall into three distinct groups.

First: People with actual, legitimate, film-related qualms. (This is the smallest group.)

Second: People who think they have actual, legitimate, film-related qualms but are actually just uncomfortable with seeing women in positions of power.

Third: Straight-up racist and sexist pieces of garbage that walk on two legs.

The guy in today's story falls into the third category.

The Last Jedi premiered back in December. Since then, it has drawn a lot of ire from people who consider themselves fans of the franchise.

People have called for the film to be stricken from the canon. Yes, that's the same canon that includes Greedo shooting first, Darth Vader's ridiculous "NoOoOoOoOoO!", and Jar Jar Binks. But this is the hill these guys want to die on. The hill of "But there are women who are bossing men around and I don't like that!"

One of these angry fans decided to take matters into his own incapable, red-pill-filled hands and create a fan edit that cuts out, in his words, the "Girlz Powah and other silly stuff." The result is a 46-minute "movie" (and I use that term very loosely) featuring the following changes:

To begin with, the guy "cut out most shots showing female fighters/pilots and female officers commanding people around/having ideas." Oh no! Not having ideas!
It gets worse. According to the fan edit's description, "Leia never scolds, questions, nor demotes Poe. He is a respected and very skilled high-ranking member of the resistance." First of all, that's General Leia to you, guy. Secondly, as the gosh danged leader of the Resistance, she should scold Poe for disobeying direct orders. It's literally part of her job.

And Vice Admiral Holdo? She doesn't exist in this guy's MRA-fueled nightmare version of the movie.

holdo appreciation tweet because she did THAT and deserves all the love and praise, i was not expecting to love her… https://t.co/olzks4QiCT
— carlos (@carlos)1513408986.0

Actually, he refers to her as "Haldo," but he's clearly not firing on all cylinders so I will overlook the error. (A brief aside: One of the most common complaints I've heard about the movie is regarding Holdo. "Why didn't she just tell Poe what her plan was?" People point to this as a plot hole, but it isn't. The First Order was tracking the ship. Holdo had no way to know how they were doing it, so her best option was to keep her cards close to her chest. Also — and this is important — Holdo was Poe's boss. She didn't need to explain herself to him because she was his superior! Whew. OK. Glad I got that off my chest.) Anyway, there's no Holdo, but the kamikaze mission near the end of the film still happens. In this sexist guy's fantasy film, Poe is the one who blasts the ship into Snoke's fleet, dying in the process. The uploader also made huge changes to the scenes with Rose and Finn. Specifically, according to him, "Asian chick speaks less, doesn't bully Finn [...] she is never formally introduced. She is just there and occasionally smiles at Finn or screams, 'Finn!'" Yep. He refers to her as "Asian chick." Because why limit yourself to being sexist when you can be both sexist and racist?

Anyway, say it with me now:

This edit is a bunch of hot garbage, and the guy who made it is the worst sort of human (and I'm using that term loosely, too). Of course, I'm just one person (with some very strong opinions about feminism and Star Wars). You don't have to take my word for how ridiculous this fan edit is...

There's not really much I'd add to this. But Rian Johnson (the film's director) had something to say:
Yup. Yup. That all appears to make sense. Let's check in with Mark Hammill.

Ooh! A transition to emojis! How about John Boyega (who plays Finn)?

Aaaaaand there we go. A bunch of the actual cast and crew members of the film have weighed in on the "de-feminized" version of The Last Jedi, and as you can see, none of them are in support of it. How could they be? They made a good film with some amazingly badass, powerful women at the center of it. And anyone who doesn't like it can bugger off and cry into their blue milk.

Yeah. That's pretty much it.