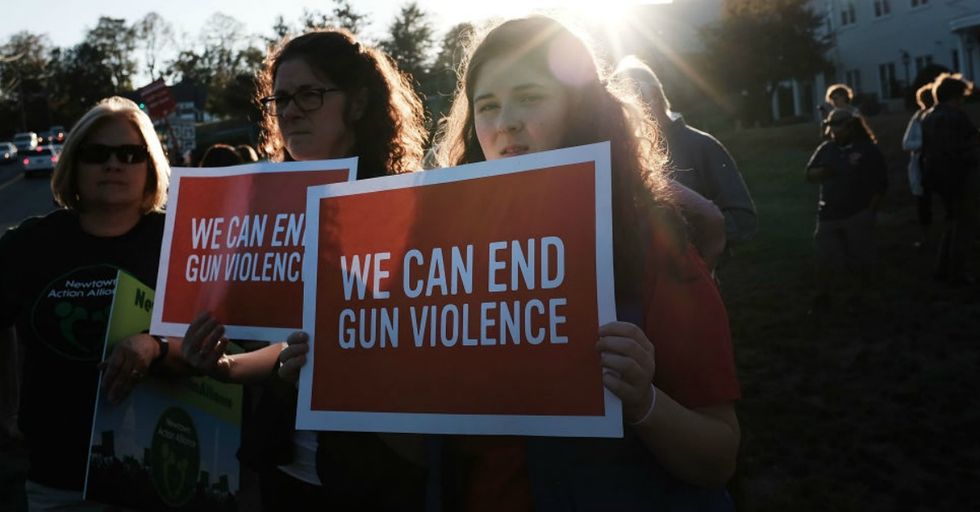 This is a fraught moment in our nation's history. When Donald Trump became president, we were forced to hold a mirror up to the insidious currents of racism and other forms of intolerance that plague the United States. When Trump banned Muslims from this country and said black football players should be fired for protesting, we were reminded that there are still deeply rooted prejudices in many Americans' hearts.

And when 59 people were shot to death from a Las Vegas hotel room less than a week ago, we confronted, yet again, our beyond frustrating inability to put aside politics and party to reflect on the broken laws that make massacres like the Las Vegas shooting possible in the first place.

On Sunday, October 1, a shooter opened fire on a huge crowd of concert-goers attending the Route 91 Harvest music festival in Las Vegas.

Fifty-nine people died and more than 500 were injured in one of the most deadly mass shootings in U.S. history.

The shooting immediately re-sparked the national debate about gun control.

The argument of gun control advocates: A tragedy of this scope should be unfathomable. No one person should be able to obtain that many guns and that much ammunition. With stricter gun regulations, events like these might not be wiped out completely, but they will become less frequent. The argument of gun rights activists: This was a tragic but unavoidable event. "Nutcases" like the Las Vegas shooter will always figure out how to get guns. People need to be allowed to defend themselves. Guns are what keep us safe.

What gun rights activists seem to be unwilling to address is the fact that white men have committed more mass shootings than any other group.

According to Newsweek, 54 percent of mass shootings since 1982 have been committed by white men. White men are unequivocally the most dangerous group of people on the planet, and yet we as a society are unwilling to stifle white men's "right" to own multiple deadly weapons. (Probably because, by and large, white men are making these decisions, meaning they're also indirectly allowing mass shootings, which means these white male lawmakers are also dangerous. It's a neverending cycle of white male violence.)

Luckily, singer and actor, Eric Benét has an idea:

As has become clear from countless instances of police brutality against (unarmed) black people, racially-motivated incarceration practices, and pretty much every other aspect of American life, racism is institutional. White men can shoot up concerts and churches and elementary schools, and no one calls for white men to be locked up, but a black man can kneel peacefully during the national anthem, and the President of the United States will call for anyone who does the same to be fired and disgraced. Benét's tweet may be a joke, but it makes a poignant point about how skewed our policies and practices and beliefs are due to the systemic racism that is so deeply rooted in American society. It's past time for things to change.