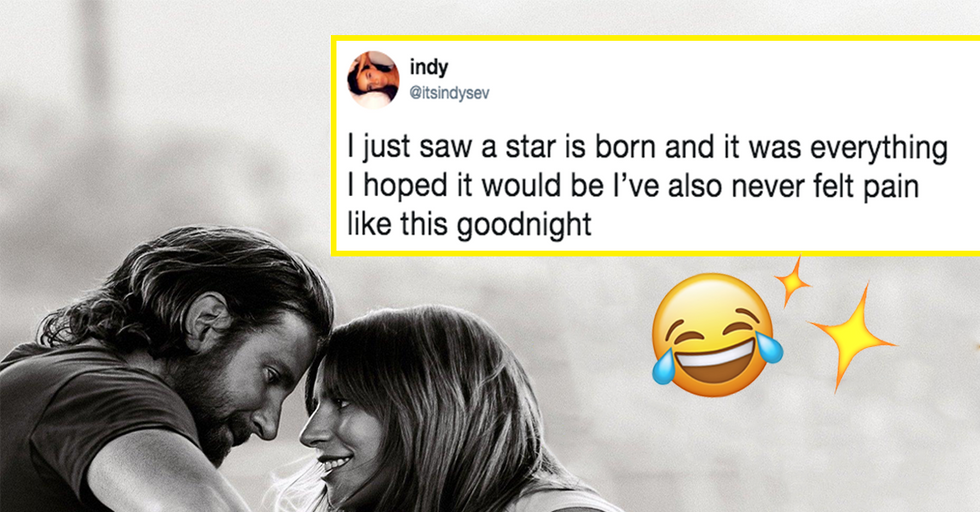 If you haven't gone to the theater to see the latest adaptation of A Star Is Born yet, what are you even doing with your life? It is a glorious film that we all need right now. Lady Gaga is revelatory as Ally, a waitress and aspiring singer whose career gets launched into the stratosphere by Jackson Maine (Bradley Cooper), an aging and alcoholic country rock star after he discovers her singing in a bar one night. They fall in love, they struggle with fame, and they sing incredible songs. You are almost guaranteed to bawl your eyes out by the end of the movie.

The A Star Is Born memes began forming on the Internet weeks before the movie came out. The trailer was enough to shake the online community awake and tune us into what turned out to be more than a movie. It's a cultural moment. And the memes are glorious. But now that the movie's out, they are even better. Look, I loved this movie. I may or may not be listening to the soundtrack as I type (I am). I may or may not have written my own modestly successful A Star Is Born meme (I did). I may or may not be very excited to compile these hilarious memes for you (I definitely am). So enjoy.

Since A Star Is Born is still in theaters, there aren't many good GIFs from the movie.

But I think this captures the idea of a star being born pretty well. Don't worry. We've got plenty of shots from the movie coming up.

A Star Is Born has been made four different times now, but this trailer still makes me think that four is not enough. We need A Muppet Star Is Born.

Just as the trailer for A Star Is Born was entering the zeitgeist, so too was the new mascot for the Philadelphia Flyers, this heinous creature named Gritty.

Honestly, this meme works with almost any silly statement you want to make. It's just a pure and moldable moment.

Here, the shots may be different, but the message is the same: Floyd is in love with Mary Swanson in Dumb and Dumber.

It works in different accents and dialects too! Basically, this scene is endlessly customizable. And we're not done yet.

There's something so funny about her reaction in this one; while she's sitting in her car about to eat a chicken sandwich?

One instantly classic meme paired scarily perfectly with another...that of the expanding brain. Who'd a thunk?

That satisfied look on Gaga's face only means one thing: She's a shoo-in for an Oscar nomination. So is Bradley Cooper. And at least one of the original songs. And the movie, for Best Picture.

Honestly, this is a big mood. Fridays make my heart swell just like Ally made Jackson Maine's heart swell in A Star Is Born!

Yes. This 1000 times. Wet Hot American Summer was the movie in which Bradley Cooper was born as a star in my eyes.

Lady Gaga's guttural howl from the song "Shallow," the first song released from the film's soundtrack and the real star of the movie's trailer, is what we all need right now.

Just watch this little clip! It fits perfectly into any scene where a character is about to sing, and then really lets it rip.

This is too funny. The shaking camera at the end really got me.

This clip of Lindsay Lohan dancing became a meme before all the hullabaloo about A Star Is Born took over, making this the perfect crossover meme.

This was everyone going to the theaters on opening day to see A Star Is Born. Obviously, we didn't put anyone in danger.

Yep, this works like a charm. I think there actually might be a Simpsons moment for every single thing.

Far from the shallow

Get it? Because Bradley Cooper and Lady Gaga sing that they are far from the shallow, so they'd both be looking away from it. I know, this meme is amazing.

The "I just want to take another look at you" scene also works with the distracted boyfriend meme! Too good.

Have you listened to the soundtrack to the movie straight through at least four times in a row without stopping yet? Because I have and this is me.

I love this so much. This is what we got when we checked in with Ally 84 years after she was born as a star, and she looked back on the shallow for the very last time.

Off the deep end

My favorite part of this is "EXCLUSIVE: Watch as she dives in." You have to know the song, so play "Shallow" now!

Because they were the two movies that came out on the same day, someone couldn't resist creating this. Bless their heart.

Yes, I love this! In the original moment from this episode, Lucille says, "Go see a star war," but this is more appropriate to the time we're living in.

Me during a home invasion when the burglar tells me he hasn’t seen the trailer for A Star is Born https://t.co/FbfDeDLxsl
— Russell (@Russell)1537379858.0

This stock photo makes absolutely no sense whatsoever until you read this person's caption. Then it makes total sense.

It is true that we live in a digital age, and yet several big movies have come out in the last couple of years that use billboards as major plot points. Why is that?

Lady Gaga's character in the movie is Ally, which can also be pronounced ally, as in an ally to the LGBTQ+ community and that's exactly what happened with the billboard on Twitter.

Hilarious. People are labeling these moments of allyship with the Ally billboard. Love it so much.

We've come to the end of this list of memes, but it's just the beginning of our love affair with A Star Is Born. Share this with someone who'll belt "Shallow" with you!