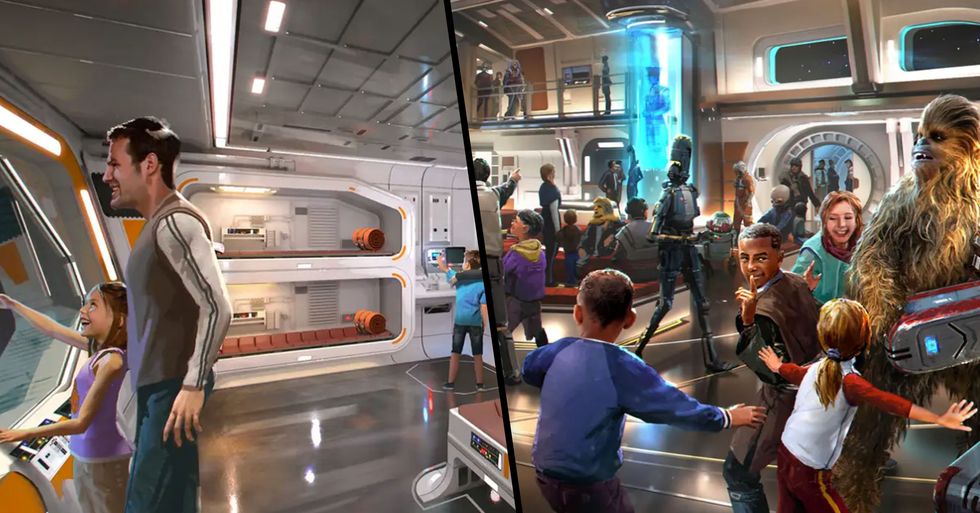 But there's been one announcement, that is particularly exciting, and it's for all the Star Wars fans out there...

The third installment of the Star Wars sequel trilogy and final movie in the Skywalker saga, The Rise of Skywalker, is heading to theaters this month.

The movie will see the Resistance face the First Order once again, and the end of the ancient conflict between the Jedi and the Sith.

In August, Disney held its biannual D23 Expo and it revealed something very exciting...

The event was host to an array of exciting announcements from the Hollywood studio.

But the most exciting thing?

After initially revealing plans to make a Star Wars-themed hotel back in 2017, Disney announced the highly-anticipated experience called "Star Wars: Galactic Starcruiser" at the event, and it's set to be the most "immersive" experiences Disney has imagined for the parks. Keep scrolling to get all the details...

The hotel is designed to make you feel like you're in a spaceship.

Disney showcased this concept art of the ship that the hotel will be replicating.

The hotel stay is a bit like a Disney cruise.

"Once onboard, you'll cruise to the galaxy for two days and two nights while becoming the hero of your very own 'Star Wars' adventure," explained Bob Chapek, chairman of Disney Parks.

After checking into the hotel, groups are then led into a Launch Pod that will blast you off into "space."

"Your fellow guests will board and depart together," explained Chapek.

Here's what the "launch pod" will look like for guests.

But of course, we all want to know exactly how this will all work. "Through the window above, you'll see stars whooshing by until you see the starcruiser in the distance," explained Executive producer and creative director of Walt Disney Imagineering, Ann Morrow Johnson. "It gets closer and closer until you connect up with the Halcyon."

Guests will then begin their journey...

Upon exiting the launch pod, guests will be guided through a set of doors and into and head into a giant atrium.

The best part? Not only do they look suitably kitted out in all things intergalactic, but when you look out of the window, you'll be able to see out into "space."

But you won't see the same thing each time you look out of the windows...

"Here, you spend the next two days and two nights living onboard the space ship and everything from an alien crew to the fact that absolutely every window has a view out into space," explained Johnson. "We hope you'll enjoy the ever-changing vistas as the ship progresses from place to place." Disney truly has thought about every detail.

And of course, you'll be seeing some familiar faces during your stay.

Guests will be able to interact with fan-favorite characters such as Chewbacca and Rey as well as other passengers on board the starcruiser.

Each person's experience is unique and the choices you make can alter your stay...

Because this is Star Wars, you might suspect that not all is going to go according to plan," teased Johnson. "Be wary of who you make allegiances with because the choices you make affect the course of your journey, and ultimately determines how your Star Wars story unfolds."

They'll also be a bunch of activities on board.

Including lightsaber training! "While the Halcyon never anticipates any Galactic conflict these defense skills might come in handy later." If that wasn't already enough, guests onboard the Halcyon will get to travel to Disney World's newest themed land, "Star Wars: Galaxy's Edge" where you'll be able to visit the Millennium Falcon, build your own droid and lightsaber, and try out the park's newest ride, Rise of the Resistance, which opens in December at Walt Disney World, Insider reports. Booking for the hotel, which is coming to the park in 2021, is said to begin "soon" so stay tuned for more details. In the meantime, fans of the iconic franchise can now get paid to watch the movies. Keep scrolling to find out how...