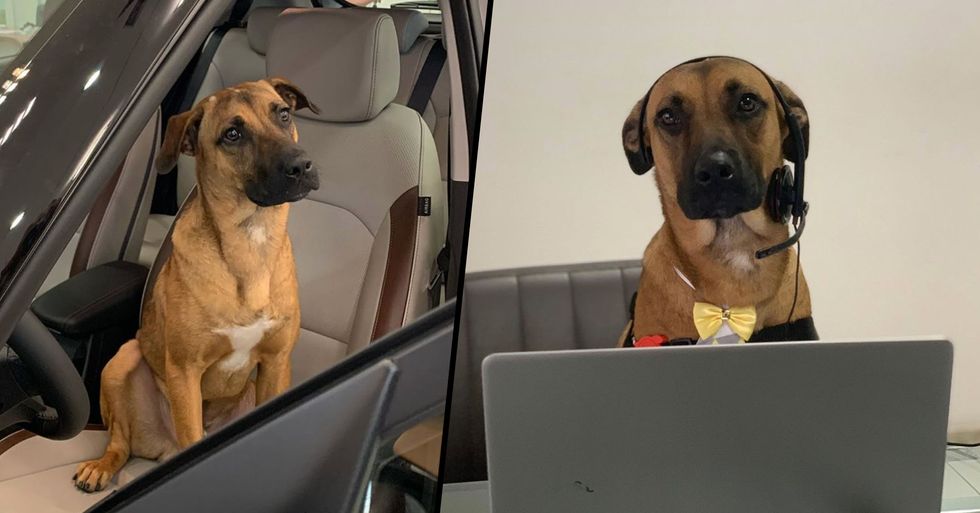 An incredible story of a stray dog who was given a second chance by a car dealership has gone viral this week.

The pictures are adorable...

The latest adorable pooch to take the internet by storm got the second chance he deserved.

A stray in Brazil managed to get himself adopted by a car dealership, and it's the sweetest story.

Staff at the Hyundai Prime dealership noticed the adorable pooch after he began hanging around frequently.

At first, staff thought it was just a temporary thing.

And that the pup would soon move on to somewhere else.

Tucson proved them wrong, however.

The little pooch remained persistent and kept coming back to his new friends at the store.

It seems he made quite an impression...

And it wasn't long before he became a permanent resident.

He was determined to stay.

And staff were happy to oblige.

But they went a step further...

They hired the pooch. Yes, you read the right...

He even has his own ID card...

Despite adopting him in May, the pooch went viral this week after his Instagram account gained attention from dog lovers.

The pooch loves to greet and interact with customers.

Showroom manager Emerson Mariano told Top Motors Brazil that the feedback for Tucson’s customer service in the store has been extremely positive.

He went on to say the environment in their organization has improved thanks to the dog’s “very caring and docile nature."

Many customers return to the store after purchasing a car just to greet Tucson again.

Some even bring him gifts!

The staff are all in love with the little pooch.

“After all, the company has always been pet friendly, so now, we decided to embrace this idea in practice too, having our own pet, precisely at a more complicated time like this, with so many abandoned animals." For another adorable dog story, scroll on to see the moment a clever pooch reports himself missing...