People commented on both sides of the issue with arguments for free speech on one side and censorship on the other. | 22 Words 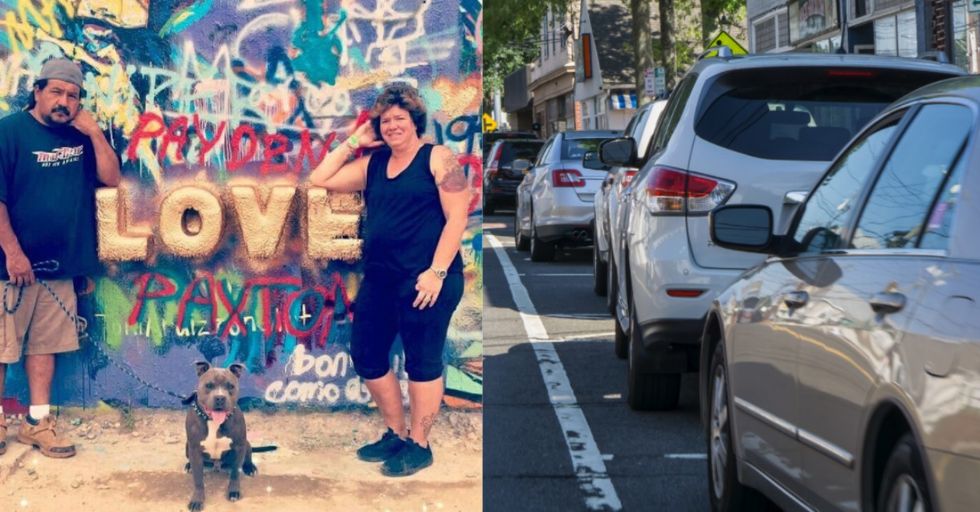 Karen Fonseca was sent to jail yesterday, November 16 for outstanding charges. But what really brought her in was the decal that she chose to display on the back window of her car.

Fonseca and her husband put this "F*ck Trump and F*ck You For Voting For Him" decal on the back of their truck.

They've had the sticker for eleven months, according to CNN. The Fort Bend County sheriff posted a picture of the decal to social media, and said that he had gotten a lot of calls asking for him to have the owner remove the sticker. In the post, which he has since deleted, the sheriff said that he wanted to find the person who owned the truck so that he could charge them with disorderly conduct.

His original Facebook post said, "I have received numerous calls regarding the offensive display on this truck..."

"...as it is often seen along FM 359. If you know who owns this truck or if it is yours, I would like to discuss it with you. Our prosecutor has informed us that she would accept disorderly conduct charges regarding it, but I feel we could come to an agreement regarding a modification of it." Even though Sheriff Nehls said that the prosecutor said she would accept a disorderly conduct charge, the district attorney told Buzzfeed News that he did not agree with them both.

Texas state law says that disorderly conduct is when someone uses "abusive, indecent, profane, or vulgar language in a public place, and the language by its very utterance tends to incite an immediate breach of peace." Similarly, it does not allow making an offensive gesture or display in a public place that "could have the same effect."

The district attorney, John Healey, told the Houston Chronicle that he wished that the sheriff's office had told him about the issue earlier.

He said, "I did not believe it was a prosecutable case based on the definition of disorderly conduct." He didn't hear about the issue until the sheriff's Facebook post was already getting public comments. The ACLU of Texas also responded to the post on Facebook, writing, "Constitutional Law 101: You can't ban speech just because it has 'f@ck' in it...Hey truck owner, feel free to contact the ACLU of Texas."

People commented on both sides of the issue with arguments for free speech on one side and censorship on the other.

One person wrote, "I voted for Trump. F*ck this sheriff. The first amendment applies to ALL Americans! I hope the truck owner sues the pants off of this clown," one person wrote, according to Buzzfeed News. "Using a badge to intimidate people of different political persuasions is a disgrace to the office he holds, and he should be removed." Another person wrote, "I've seen this truck, and I would (be) pleased if the owner of this vehicle was prosecuted for disorderly conduct. My children saw this, and I was infuriated they were subjected to this offensive display." That's unfortunate, but you can't arrest someone because they offended you.

The post garnered attention a heated debate in the more than 10,000 comments it accumulated.

Ultimately, the officer took the post down because he said he was getting hate messages towards his wife and children. The police department said that the sheriff held a public forum to discuss this and other matters.

On Thursday afternoon, the sheriff's office released the following statement:

"The Sheriff made the post on his Personal page. The objective of the post was to find the owner/driver of the truck and have a conversation with them in order to prevent a potential altercation between the truck driver and those offended by the message. Since the owner of the truck has been identified, the Sheriff took down the post. Due to the hate messages he has been receiving towards his wife and children, the Sheriff will not be commenting on the matter further."

Because of all of the controversy over the sheriff's Facebook post, they found the owner of the truck, who was Karen Fonseca.

Then they arrested her on different charges. She'd previously been charged with felony fraud charges is Rosenberg, Texas for using fake identification. She is now out on bail for $1,500.

Karen told CNN that she put the sticker on her truck because it explained how she felt.

She said, "We wanted our statement out there. That's our opinion on him." She told CNN that photos of her decal have been popular on the Internet in the past and have fostered controversy in real life as well.

She gets negative reactions about the decal while on the road, sometimes, but she said they're mostly coming from older white men.

She told CNN that people also stop to laugh at the decal or ask her where they can buy one of their own. "I'm not going to remove it because I know I'm not violating any laws or rules," Fonseca said. When she was arrested on Thursday, she didn't know that there was a warrant out against her for the fraud charge. She told CNN that she questioned the timing of the arrest coinciding with the decal controversy. She told KTRK, "People abuse the badge, in my opinion, and money talks."