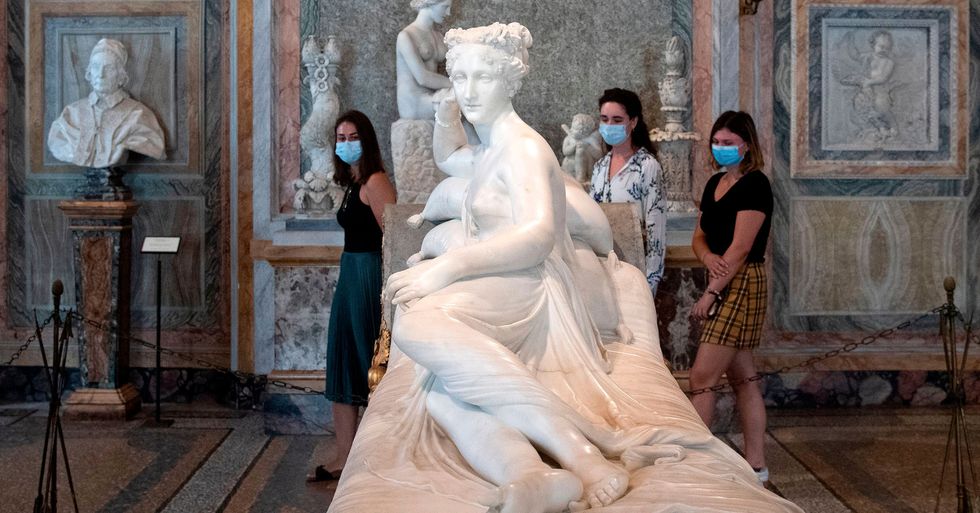 Visiting a new country is always exciting, and finding the best photo ops is just part of the experience. But one tourist took things a little too far when he decided to climb on one of Italy's most famous sculptures, resulting in the worst possible outcome.

After the CCTV footage was shared, locals have voiced their outrage at what he did after the incident...

Everyone has been to a store and accidentally knocked something over at least once in their life.

Usually, it's kids that are the culprits.

But sometimes on a rare occasion, it's the parents that are to blame...

But knocking over a few cans of beans is nothing in comparison to what one guy did while on holiday.

Get ready for a serious cringefest...

Looking for the best photo ops on holiday is standard for any tourist looking to flaunt their pics on Instagram.

However, when a quick photo op turns into thousands of pounds worth of damage, it probably isn't worth it.

I've got a sweat on just thinking about it...

Tourists don't have the best reputation.

And you can spot them a mile off...

Burnt and drunk sums it up pretty well.

Although not all tourists fit into this category, most just want to experience the culture the place has to offer.

But for one man visiting a museum in Italy, it turned into a complete nightmare.

The tourist was spotted taking a photo on one of the famous sculptures when the worst happened.

A video has been shared of the incident that took place on Friday, and people are shocked by the man's initial reaction.

The sculpture displayed in the museum is a plaster cast for the marble version.

"Paolina Borghese as Venus Victrix," which is currently in Rome's Galleria Borghese. However, the sculpture itself dates back to 1804.

Multiple reports say the tourist was attempting to take a picture while sitting on sculptor Antonio Canova's plaster.

The mishap took place in Possagno, just over an hour outside of Venice.

The visitor realized straight away he had broken the sculpture.

After "lying next to the precious work, being photographed by another person."

CCTV footage has since been shared that shows the tourist sitting on the sculpture, while someone else appears to be taking his photo.

The museum's Facebook post said an Austrian tourist was responsible for breaking two toes of the sculpture.

However, in the picture, the sculpture appears to have lost three toes.

And the worst part?

It was reported that the visitor left the scene immediately without notifying the museum of the breakage.

Facebook users have been sharing their thoughts on the accident.

According to reports, museum security quickly noticed the damage. "A few minutes later our room guards detected the damage and raised the alarm," the museum's statement, translated from Italian, said. "An emergency situation was immediately declared."

The museum said on Facebook that the fragments of the broken sculpture were found and that the cast can be restored. But people believe stricter regulations should now be put in place.

The museum is currently discussing the artwork's restoration over the next few weeks.

Surprisingly, this won't be the first time the statue has been restored.

The plaster cast originally lost its head after a Christmas bombing raid in 1917 during World War I and was restored years later in 2004.

The tourist's identity has not been released to the public.

But he has reportedly apologized for the incident.

Local newspaper Adnkronos said that when the tourist realized what he had done, he appeared to be "visibly disturbed" by what had happened.

And quickly moved out of view of surveillance cameras.

The mayor of Possagno confirmed that the tourist has been identified.

"The really incredible thing is that he had not thought of reporting the incident," Favero was quoted saying in the report, translated from Italian. "In my eyes, the fact of leaving the sculpture in that condition is criminal."

Surveillance footage was used to identify the tourist.

This is all down to a new check-in process where visitors sign their names on entering.

Which has been compulsory for all museums since reopening after being closed due to the coronavirus.

Local police managed to contact the woman who had signed in the group, which the man responsible for the damage was part of.

As it turns out, the man was her husband.

After the call, the police received an apologetic email from the tourist who said he was on the trip for his 50th birthday. Check out the video below...

You can read his apology below...

"During the visit to the Museum of Possagno, I sat on the statue, without however realizing the damage that I evidently caused," he wrote in the email, translated from Italian. "I apologize in every way." Keep scrolling to see why these parents have vowed to pay for a $60,000 statue...