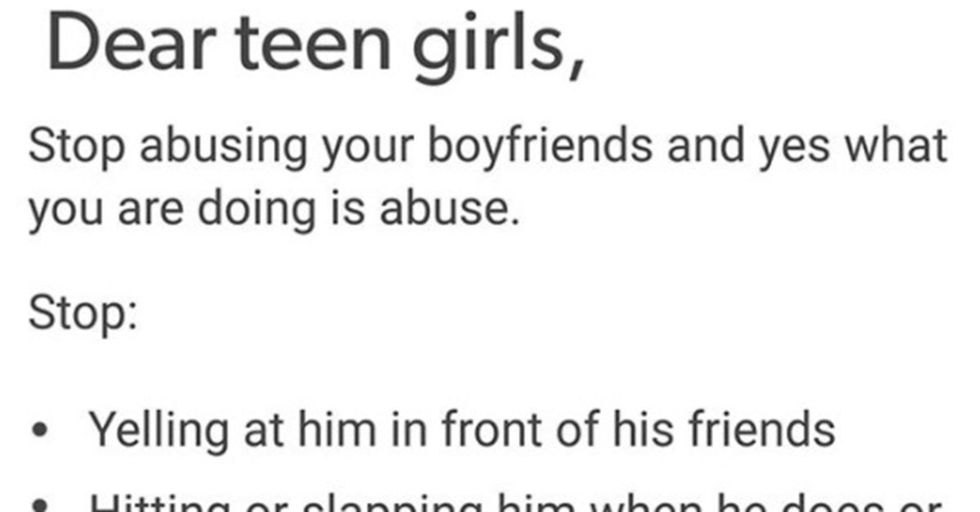 Recently, a Tumblr post has gone viral for a very interesting reason.

A user on the social networking site has called out the hypocrisy of girls who might think that what they're doing — often common behavior, especially among kids — isn't abuse. Take a look at the eye-opening account.

Of course, yes, slapping or hitting someone who does something you don't like isn't ok.

But you'll see that other items on this list might be a little more controversial. In fact, many people reading this might do them regularly. But the post's author wants that to stop.

While it might not be physically abusive or illegal, it can be its own form of abuse that preys upon other people to make someone feel bigger or stronger.

Whether or not they fit your definition of "abuse," it's certainly undesirable, predatory behavior that needs to stop. No one should tolerate this, even from someone they like.

..are two big issues in any relationship. And when those lines get crossed, trust normally goes out the window. But when the person crossing the line has the power, they can often get away with abusing it.

Now, this is the part that's controversial.

There are many instances of emotional abuse, and a couple instances of physical ones here, but I'm not sure that a guy would be more likely to get called out on these. But maybe he would.

So there's a message to boys who might be suffering...

...from this sort of behavior at the hands of a partner. It urges them to value themselves and distance themselves from the relationship. Certainly reasonable advice.

And a note to the girls as well...

Saying, "knock it off." It's clear that this behavior isn't acceptable, but when a person keeps getting away with it because of their looks or charms, they can lose track of consequences pretty quickly.

Fortunately, people are taking this harrowing post and using it for good.

One Tumblr user shared her experience with her brother and his GF, whose actions against him eventually turned into something far worse.

It's not the most popular thing to talk about...

...but that doesn't mean it's not important. In fact, it's the unpopular stuff that makes your skin crawl that's exactly what we NEED to talk about.