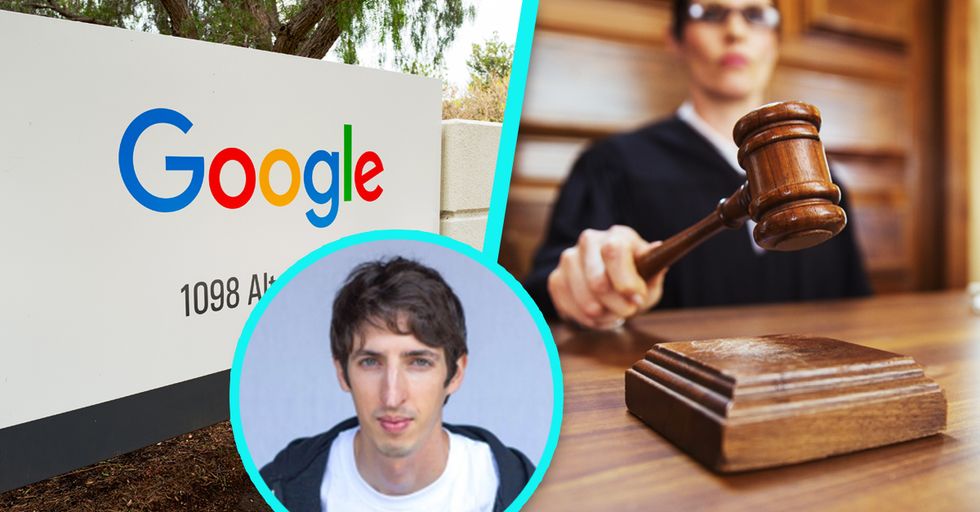 You ever hear something so fantastically ridiculous you just want to laugh out loud? Only, other people think it's super serious so you don't laugh because laughing would be rude and you don't want to be rude. But inside you're snickering at the gross ludicrousness of it all.

That's how I felt when I read that James Damore, the former Google employee who released a sexist manifesto stating that women weren't fit to be engineers because, "science" is now suing Google for discrimination against conservative white men.

Before he was fired in August 2017, Damore's manifesto emerged, troll-like from the darkness, and inside it, the ex-Googler wrote, among other things:

We need to stop assuming that gender gaps imply sexism. I’m simply stating that the distribution of preferences and abilities of men and women differ in part due to biological causes and that these differences may explain why we don’t see equal representation of women in tech and leadership.

But Damore wasn't done. He then went to make such lovely claims as  "employees with conservative political beliefs face discrimination" and "ideological diversity" was more important than actual racial and gender diversity.
You want to know the last people who made those types of claims? Nazis. They had whole departments of scientists dedicated to discovering the scientific hierarchies of the races. Of course, it was all complete and utter BS.
Other important mentions are all those wonderful racists in the Jim Crow and earlier eras South who thought slavery and segregation were very fine ideas on account of the fact that science proved the negroes were inferior. Also, all the alt-right bros, proud boys, and any and all forms of white supremacists now popping into the zeitgeist. But I digress.
In any event, Damore was so distressed by the vast unfairness of being a white man at one of the most white-male-filled companies in the world, where he routinely earned $150,000 bonuses, that he decided to sue.
For this righteous task, he and co-plaintiff David Gudeman employed the services of Harmeet K. Dhillon, Esq., the Republican National Committee’s committeewoman for California, who herself, ironically, had endured racist smearing from members of her own party because of her Sikh religion.
In any event, the complaint states:

Google’s management goes to extreme — and illegal — lengths to encourage hiring managers to take protected categories such as race and/or gender into consideration as determinative hiring factors, to the detriment of Caucasian and male employees and potential employees at Google... Google employs illegal hiring quotas to fill its desired percentages of women and favored minority candidates, and openly shames managers of business units who fail to meet their quotas.

Because Google, the company that basically rules the world should remain white and male, correct?
Before I continue recounting this lovely tale, allow me to digress and give a simple example of why diversity in tech is necessary. You see the video below? Watch and see what happens when all skin types are not accounted for.
In any event, the Dillon Law Group is very serious about pursuing the truth in this matter of national – nay, international – importance.  They even put out a blog post asking for other poor white male staffers who had languished under Google's heels to come forward.
In the end, all Dartmore wants is justice. "I would welcome the chance to go back to Google and I do feel like I could improve things there," he said. Well, good luck to you, buddy.