SHE SENT ANOTHER EMAIL. | 22 Words 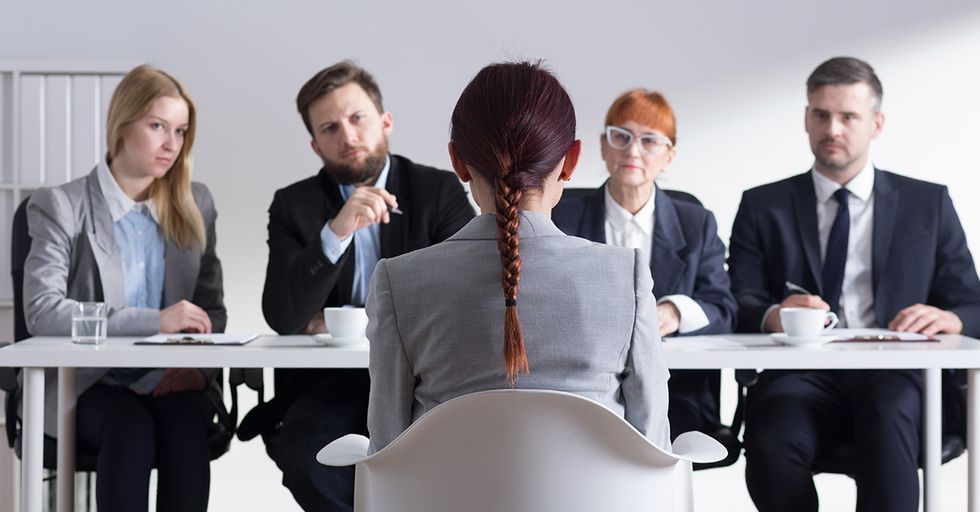 Most people are somewhat familiar with the term schadenfreude. It's defined as the distinct pleasure that is derived when someone else suffers from pain or misfortune. When that person you've been hate-following on social media (we all do it) ends up with a canceled flight, the little extra giddiness you feel is schadenfreude. It's a great term...but it's nothing compared to fremdschamen.

"Fremdschamen" is another German word that is surprisingly applicable to a lot of different situations. It refers to the embarrassment you feel on someone else's behalf. If you, like me, find it nearly impossible to watch the entirety of the "Scott's Tots" episode of The Office, then you're very familiar with the concept of fremdschamen.

You'll also be feeling record-breaking amounts of fremdschamen after reading the following story. It all started when a woman named Laura Maclean got an interview with Microsoft...

Look, getting a job can be tough.

Many young people attempt to enter the workforce in a less-than-ideal economic climate and lugging tens of thousands of dollars of student debt behind them. It's a jungle out there.

And it's all in the hopes of securing an interview.

Of course, even if you do manage to get an interview at a company, so many things can still go wrong.

You might start off with a super awkward handshake.

Good luck recovering after that one! It can really throw you off your groove!

Maybe you make a joke that falls flat — I have! Maybe you use a bad example to illustrate something about yourself — I've done that, too!

And then there's the dreaded question: "Why do you want to work for us?"

I still feel like this question is some kind of trap. I want to work here because I live in a world where you need money in order to, you know, live. I heard you can use a job to exchange services for payment, and that seemed like an arrangement that would be beneficial to my lifestyle.

Even if your interview goes perfectly, there's still a chance you won't get the job.

And you find out from a phone call or an email. You'll find out by simply not hearing anything back. Ever. However, as harrowing as job interviews can be, I think a young woman named Laura Maclean may take the prize for Most Embarrassing Job Interview Ever.

She's a 21-year-old Scottish student studying management and marketing at Robert Gordon University in the UK.

Pretty sweet, right? Obviously, Maclean was pretty excited about the opportunity. The interview would take place via Skype on February 18th, 2019.

She studied like crazy in preparation for the interview.

She even asked her friends and family members to help her prepare for the interview by quizzing her on the company.

After all that studying, Maclean was prepared. The job was as good as hers.

On the morning of the January 18th, Maclean woke up nice and early.

The interview was scheduled for 11 am, so she spent the early morning getting dressed in her interview clothes, putting on makeup, and doing some last-minute prep.

Then, she signed onto Skype.

She was ready. She was going to nail the heck out of that interview.

Now, careful readers will have already realized that Maclean had a problem

A big problem. You see, Maclean's interview was scheduled for February 18 at 11 am.

That's right. It was a full month before Maclean's scheduled interview.

But Maclean didn't realize her mistake yet.

She gave it until 11:12 am and then sent this email to the Microsoft Student Recruitment team.

Remember that term I talked about at the beginning of this story? Fremdschamen? Yeah. This is where that starts kicking in.

Guys, I have been pondering this story for the past hour, and my face is still getting hot from second-hand embarrassment.

OK. Embarrassing, sure, but I'm sure Maclean instantly recognized her error, laughed it off, and logged out of Skype, right? WRONG.

SHE SENT ANOTHER EMAIL.

This is me right now:

LAURA! You sweet, summer child. For the love of all that is holy, please, please just LOOK AT YOUR CALENDAR.

"February is the next month." I imagine Maclean has been whispering those five words to herself for the past week.

So, yeah, that went about as poorly as it could have.

Maclean was a pretty good sport about it, though.

all dressed up ready n freaking out for my big skype interview with Microsoft and this happens. possibly the bigges… https://t.co/ZY4DgWwiPZ
— laura maclean (@laura maclean)1547813575.0

She tweeted about the whole debacle, referring to herself as "the biggest noob on this planet." Her tweet quickly went viral and got all kinds of great responses.

Some people pointed out that being an entire month early to your interview is actually pretty impressive.

And I guess if it actually had been a deadline, there'd be something to this argument. But an appointment is definitely not a deadline. They're two completely different things.

At least she knows how to answer this question, though.

She can even say that her greatest strength is being early. Very early. Very, very early.

A few people also shared their own stories of interviews gone wrong.

On the bright side, at least Maclean's interview was (or is going to be, rather) via Skype. Can you imagine if she had just shown up at Microsoft headquarters a full month before she was supposed to be there?

This person's response is so sweet.

@lauramacleann i hired 100s of people at MSFT. i’d have been delighted by your excitement for the interview.
— Ivan Leichtling (@Ivan Leichtling)1547985118.0

It's true! You certainly can't deny that she was excited about the interview.

This is another great idea:

Just send another email explaining that you discovered time travel but haven't quite worked out all the kinks yet. I'm sure Microsoft will appreciate that.

Let's all just hope this doesn't happen, though:

This is pretty much the only thing that could possibly make this entire situation worse. However, I'm pretty confident that Maclean has set multiple reminders about the interview at this point.

Phew. All's well that ends well, I suppose. And I think we all learned a very valuable lesson here today. Double-check, triple-check, and quadruple-check your interview time before sending an email about it! Share this with someone who embarrassed themselves recently — it probably wasn't as bad as this!