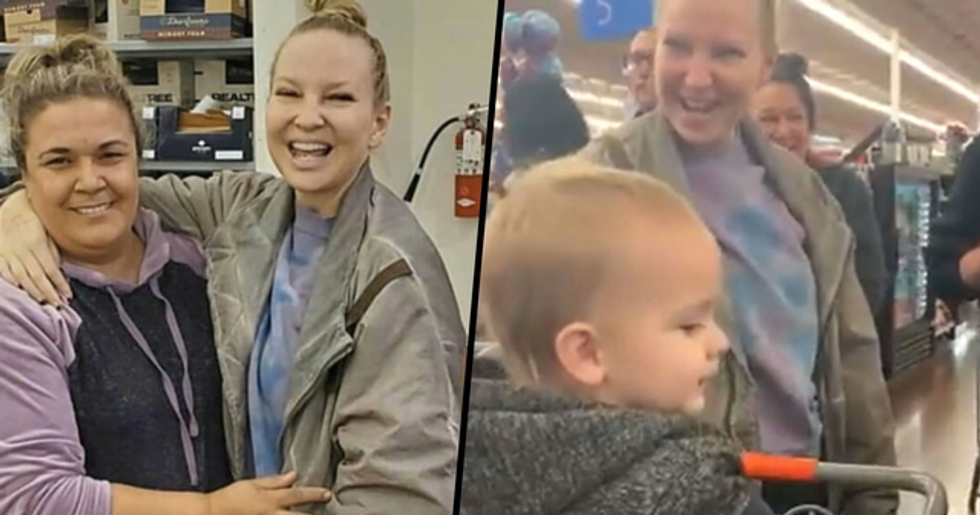 A Woman Paid Everyone’s Bills at Walmart Claiming She Won the Lottery, Turns out It Was A Famous Singer

Keep scrolling for the full story, to discover the famous face behind the generosity, and to see the ridiculously wholesome videos of the event!

It's easy for celebrities to become out of touch.

The fame, the fortune, the world at your feet, it must be hard to stay down to Earth.

I mean, it's widely accepted that celebrities just don't get it...

They may work hard, but with anything and everything at their fingertips, it's hard to believe that they really appreciate how much something as simple as a trip to Walmart can set us normal folk back.

But there's one time of year that grounds us all that little bit more.

Thanksgiving! Remember this adorable snap Kylie posted a few years ago? Even the most famous people out there seem to touch base with reality when Thanksgiving rolls around.

Every year at Thanksgiving, we hear the sweetest stories.

Like this one, about the man who accidentally texted a grandmother one year at Thanksgiving and now spends the holiday with her every year! Keep scrolling for more on that!

Prepare to have your hearts warmed.

Because one singer recently did the kindest thing for shoppers in Palm Springs, California.

On the day before Thanksgiving, she went into a Walmart and T.J Maxx and forked out to pay for every customer's shopping.

Though many shoppers didn't realize who it was...

@AngelaRaeBoon1 @Sia I work at the Walmart and she kept telling the associates and customers her name is Cece and s… https://t.co/5WcTUZ81hO
— Awwkwardddd (@Awwkwardddd)1574996403.0

As to keep her privacy, she simply told people that her name was "CiCi", and that she had won the lottery and wanted to share her winnings with those who needed it the most.

However, when some customers recognized the singer...

Her cover was blown, and people began taking photos with the star.

Excited customers began clamoring for photos with the singer...

And she happily obliged, patiently posing with her fans all while she paid for their shopping. Have you guessed it yet? It was Sia!! Keep scrolling to watch the video - it's well and truly heartwarming.

Sia truly is one of a kind.

Sia Kate Isobelle Furler is an iconic singer/songwriter who has made waves in the music world with her soulful and meaningful music and song lyrics.

And, on top of her talented music, Sia stands out from the crowd.

The singer isn't your typical musician... She very rarely shows her face and covers herself up in an attempt to shy away from the typical celebrity lifestyle.

She's incredibly inventive with her methods of concealment...

Sia often hides her face with huge bows, wigs, and all manner of headgear. And sometimes, she doesn’t face the stage, and lets dancers like Maddie Ziegler represent her and take most of the spotlight instead.

And she isn't afraid of letting her fans see her true self.

The Australian native has been incredibly open about her history with drug and alcohol abuse, and has, with very little filter, discussed her struggles and anxieties when it comes to dealing with fame.

The singer credits her alcoholism for her trademark face-blocking wig.

“I was an alcoholic and a drug addict, and I sobered up and decided I didn't want to be an artist anymore because I was starting to get a little bit famous, and it was destabilizing in some way," she told James Corden in 2016, when discussing her wigs.

People love her for her honesty.

Sia hasn't been afraid of opening up about her feelings towards fame and attention from fans. "If anyone besides famous people knew what it was like to be a famous person, they would never want to be famous," she once wrote in Billboard in 2013.

Sia is just so relatable.

Unlike many celebrities, Sia is refreshingly normal, which is one of the many reasons people love her so much.

She even admitted to using dating apps such as Tinder and Bumble...

Though she doesn’t use her real name, she does post real photos of herself on the apps - And she admitted that most people don't realize that she's the famous singer, as she just tells them she's a writer.

Sia is perhaps one of the most down to earth celebrities around at the moment, and her latest move only cements that claim further.

Video footage of her kindness was posted to Twitter...

So @Sia paid for my groceries today thank you so much!! The heart and beautiful soul you have for paying for everyo… https://t.co/ySGgDWKIBg
— Adri Buckles (@Adri Buckles)1574927784.0

And she can be seen tapping her card, and declaring, "Tada! Who's next?"

Other videos have emerged of her embracing grateful customers...

This is so heart warming to see. Sia was recently spotted at a Walmart where she paid for everyone’s groceries. She… https://t.co/qjHPRYh2iA
— Pop Tingz (@Pop Tingz)1574946079.0

And happily posing for photographs, all while still introducing herself as "CiCi".

And it wasn't only groceries...

Some people were even gifted with electronic items such as IPads and laptops.

Many can't quite get over Sia's selflessness...

And have taken to Twitter to thank the star for her generosity.

However, some fans are a little concerned about Sia...

The singer has famously suffered from various mental health issues in the past, and some worry that her spending spree may have simply been a symptom of a manic episode.

Her behavior did seem a little eratic...

But people have praised the Walmart employees for being so considerate and looking after the singer during her unexpected appearance. Now keep scrolling for that incredibly wholesome Thanksgiving story we promised you earlier!
20%

$7.99 $6.39
Buy Now
See More Deals
We hope you find these deals as awesome as we do! Just an FYI: we may receive a share of sales from links on this page