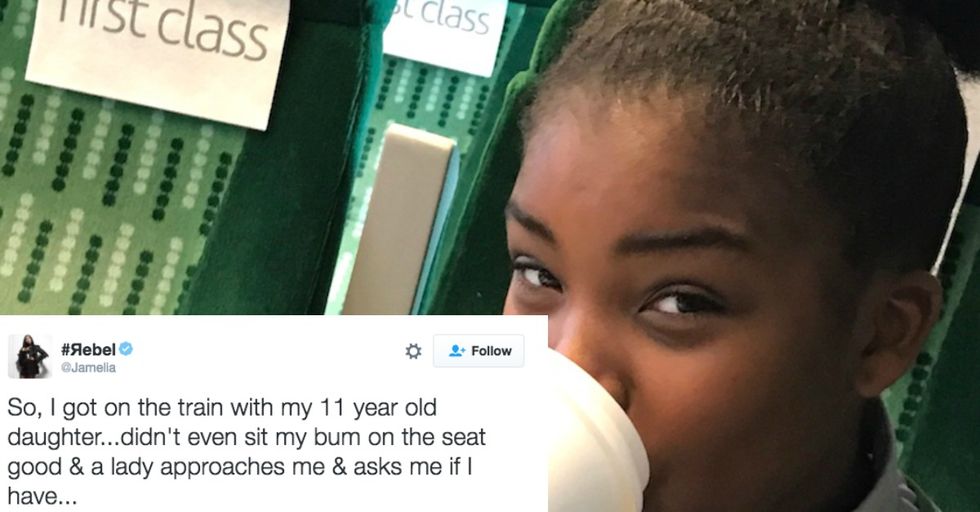 Jamelia Davis, a singer in the UK, was traveling on a train with her 11-year-old daughter when she had an encounter with a stranger that is a reminder that ignorance is still alive and well.

In a series of tweets, she recalls how a woman in her 40s — who was a fellow passenger and NOT an employee — questioned whether she and her daughter had first class tickets. Based on no evidence whatsoever.

After sharing her story, many of her followers were as outraged as Jamelia was and offered her words of support.

Others replied with their own similar stories of racist encounters, too

Jamelia later detailed the story on her own website, and admitted she was surprised to find out that people were shocked by how she was treated, because this small instance was not an isolated incident. She also added that most of her travel is in first class, and 60% of the time she's on the train, she experiences a similar exchange either with employees or fellow passengers.

She wrote that she also received a lot of pushback from users, some who were saying she was "playing the race card", to which Jamelia responded, "If i was to tweet every single racist incident that happened to me as it happened, you would be on the floor. If i and every other person of ethnic minority i know were to do it, i guarantee you it would affect twitter’s algorithms and become a trending topic. I have no doubt about that." "The insistence that I don't affect the status quo with my uncomfortable truth is quite telling, and indicative of the issues we face today as a society. The problem is that we don't tell you, we speak about it amongst ourselves, and you get to carry on about your day not realising you've ruined ours. "I tweeted because i wanted you to read it. I wanted you to be aware of this happening. I wanted you to know that even if you have these thoughts in your head, it’s not ok to say it aloud."

"I do not want to keep quiet about it anymore," she wrote. "We serve no-one by remaining quiet, if anything this renders us complicit in the continuation and validation of this behaviour. It is not ok with me, and it shouldn't be ok with you."

She concluded, "Most importantly, i'm teaching my girls not to be ok with it either. I absolutely refuse to send my daughters out into a world that tells them NOT to speak up when someone hurts them. The only way that will happen is if we are all brave enough to put these important conversations on the table now."