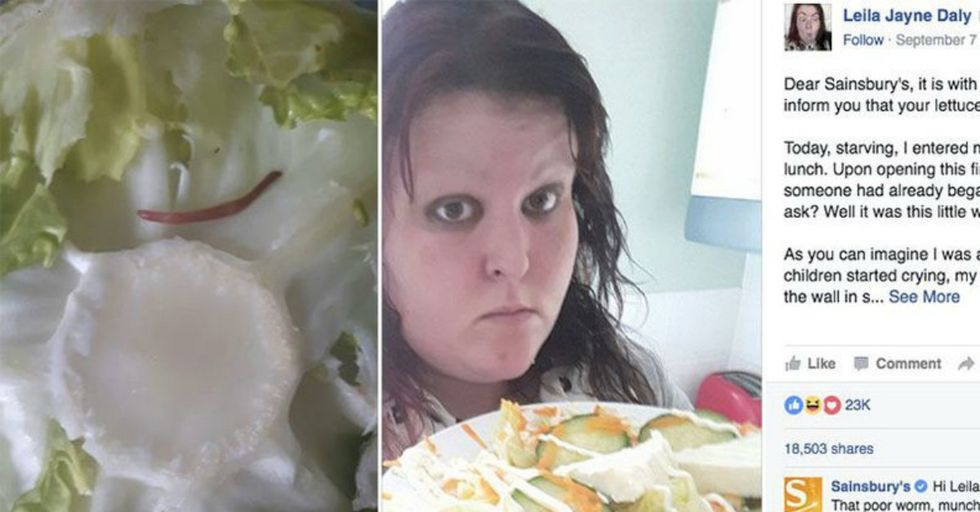 This is the story of Leila Jayne Daly, who had the misfortune of discovering a worm in her lettuce that was purchased at Sainsbury's.  Ross, a member of the Facebook team for the store, took care of the complaint in the best way ever, and truly deserves some kind of award.

What's the worst dining experience you've ever had?

Not in terms of service, but rather, something really gross that happened to you while eating? Most people have one or two stories, but what happened to one woman will have you scouring your soups and salads the next time you go out to eat.

However, as you'll see, the bad experience, after a few twists, turns, and complaints on social media, got a happy resolution.

Well, as happy of a resolution as one could hope to find under the dire dining circumstances this woman faced when all she wanted was a simple salad. The big reveal isn't so much in what she found in her lettuce, but how the company responsible treated her during the complaint/negotiation. Whether you're a diner, a grocery shopper, or in food service, you'll want to take note of how this went down, starting with the original complaint.

Well, if you ever really LOOKED at salad before. You'll want to know what's in your food, and what was crawling (yes, CRAWLING) around this woman's lettuce will make you want to order a huge steak.

So let's get to the somewhat gross complaint, then the real moneymaker...the store's response.

It's safe to say there are more than a couple surprises in how this went down. Good, bad, and ugly. We'll leave it to you to determine which is which.

It all started when Daly used Facebook to complain about the worm, as one would not normally be pleased when this happens.

To drive the point home, Daly supplemented her open letter with the following photo evidence.

Enter Ross from Sainsbury's, who got back to Daly with a carefully crafted reply later that evening.

Daly didn't waste any time responding, and soon the thread had entered the negotiating phase.

The saga continues, as all sagas do!

It keeps going, turning into a real novel of a conversation, but you'd certainly want to know where this ends up after SO MUCH back and forth, wouldn't you?

Well, you're gonna find out!

You can see they keep a decent temperament throughout the whole ordeal. That's important on BOTH sides.

It was at about this point in time that Ross reached legend status.

BOOM! Did he come through on his promise?

Ross didn't provide a selfie, but a couple of days after their initial exchange, Daly received something in the mail.

He didn't, but he did offer something else, instead...

And with one final reply, Ross signed off.

Whoever said salads are boring has clearly never met Leila or Ross. Now that's how you do customer service.