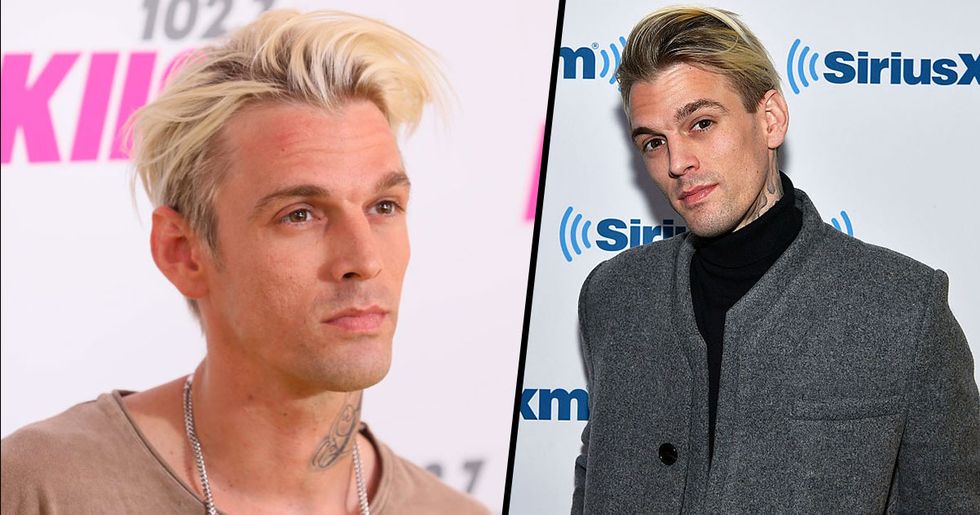 The past few weeks have been a rollercoaster for American singer, Aaron Carter.

After hearing that he was given a license to carry around a gun, we were all very concerned. While I understand that the constitution allows one to carry a gun for self-defense purposes, it is completely absurd to hand a weapon over to someone with serious mental health issues, and we know that the background checks aren't as accurate as they should be because Aaron "passed with flying colors."

Then his own brother issued a restraining order against him because of his "violent threats." And now, just days after unveiling a massive face tattoo of Rihanna, Carter appears to have gotten inked again...

Keep reading for this unbelievable story from start to finish.

Amidst all of the family drama, Aaron unveiled a huge new tattoo of, what appears to be, the R&B legend, Rihanna. And where was the tattoo?

The thirty-one-year-old revealed his new ink with an Instagram post which showed the entire right-hand side of his face covered in what seems to be a mural to Rihanna.

The tattoo depicts Rihanna as the Greek monster, Medusa.

The distinctive design stretches from the top of Carter's forehead all the way down the side of his cheek to his jawline. Apparently, Carter was inspired by a shoot that Rihanna did with GQ wherein she posed as the Greek gorgon back in 2013.

He posted a clear photo of the tattoo to Instagram.

On Instagram, Aaron uploaded a photo of the tattoo accompanied by a caption written entirely in capital letters. The caption read: "IM THE BIGGEST THING IN MUSIC RIGHT NOW. I CANT BE DENIED. FACT CHECK ME. #unstoppable #LMG #SilenceBreaker"

But, unfortunately, the tattoo annoyed a lot of "fans."

So far, Aaron has uploaded three pictures to Instagram of the tattoo and all three have been inundated by cruel comments from trolls. Hundreds of followers have been claiming that the tattoo is ridiculous and that it looks nothing like Rihanna.

Despite the trolls' negativity, Carter's story is full of supportive messages from fans. One message calls Aaron an inspiration and an incredible talent. Another tells him to ignore the haters.

When Carter got the tattoo, the police turned up.

According to Metro, Aaron live-streamed himself getting the inking and concerned fans called the cops claiming Aaron was having a medical emergency. Police rushed to the scene, but eventually left after speaking with the singer.

And, just days after, Carter seems to have gotten inked again.

The star took to Instagram today to show off his new tattoo.

The image clearly shows his neck wrapped up.

And it looks like quite a detailed design, which is pretty risky given its location... although let's be honest, he's got Rihanna on his face so he probably doesn't care.

His tattoo artist spoke out earlier this month about his controversial tats...

Herchell Carrasco, told TMZ earlier this month he was caught off-guard when Carter asked for the face tattoo, as he believed he was just going to work on the singer's torso. According to Carrasco, Carter "wanted to keep going and I had to stop him." "'I couldn’t cover his whole face in a tattoo."

He's showing no signs of slowing down.

We doubt it'll be long before he's back in the tattoo studio.

After all, he doesn't seem to be able to stop himself.

All-in-all, Carter has had a crazy few months.

After going through all of the above, we hope that Carter can get better and see himself back on the straight and narrow in the near future. Good luck Carter.