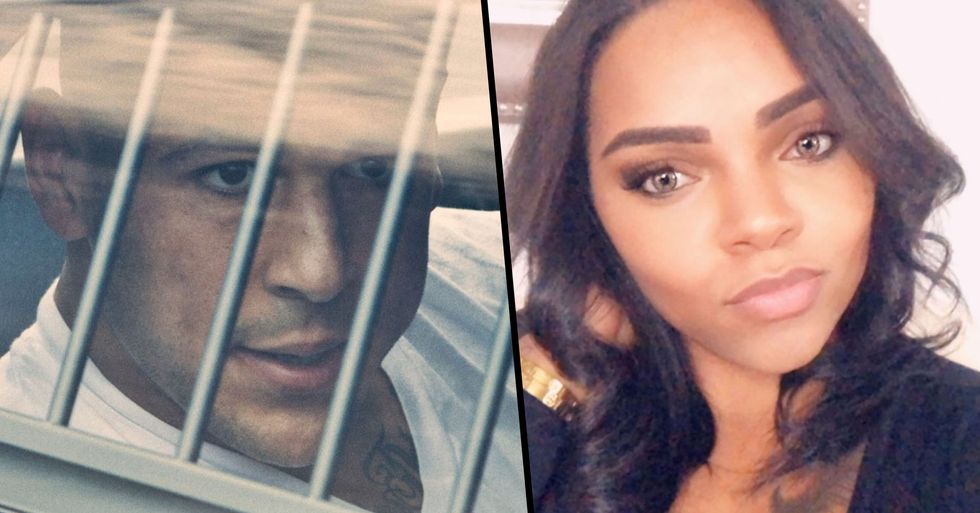 The true-crime documentary series in question is about former Patriots tight end Aaron Hernandez - the convicted murderer who completed suicide in prison in 2017. And now his former fiancee has spoken out in the midst of the media frenzy which followed the show's release.

And if you love documentaries...

Well, it is perhaps the most exciting (and darkest) yet.

He played as a tight end for the New England Patriots - but below the surface was hidden darkness.

It follows the star's whole life.

Beginning in childhood, it then follows the athlete's impressive career as he rose to stardom.

As the tagline reads, "No one has allegedly murdered two people and then played an entire season as a professional athlete." Wtf?

How did a man who seemed to have it all end up convicted of murder?

Hernandez was first accused back in 2012.

He was actually tried for the double murder of Daniel de Abreu and Safiro Furtado at the time, but was later acquitted - and accepted back into the NFL.

And in 2013, Hernande's brother Odin Lloyd was murdered.

And this time, Hernandez was found guilty.

He was convicted and sentenced to life in prison without the possibility of parole.

But that wasn't the end of this creepy story.

On April 19th of 2017, Hernandez was found dead by suicide in his cell, having hanged himself with a bedsheet.

And Netflix follows the whole story.

With exclusive interviews from those who knew Hernandez, they try to unpack the dark and dangerous hidden side of his personality.

And needless to say?

People are very excited about the horrifying 3-part miniseries.

The story is incredibly intriguing.

With so many twists, turns, and tragedies, you'll struggle to believe it's real.

And now it's here!

The doc dropped on January 15th, and many are already singing it's praises.

Some are concerned about the way Netflix is drawing attention to this sensitive case.

Since the launch, attention on the case is at an all-time high.

And now Hernandez's former fiancee has spoken out.

Shayanna Jenkins-Hernandez was with Aaron for several years before his legal troubles began.

Avielle Hernandez was born in 2012, the same year the 2 became engaged.

Now Shayanna has spoken out following the documentary's release.

She first posted this inspirational quote, with the caption "Give me the strength."

Shayanna has also recorded an interview with Dr. Phil.

Back in 2017, she spoke out about her side of the story - but it seems as though she still has more to say on the matter. If you enjoyed Killer Inside, scroll on. We've got all the details on another incredible (and terrifying) documentary.