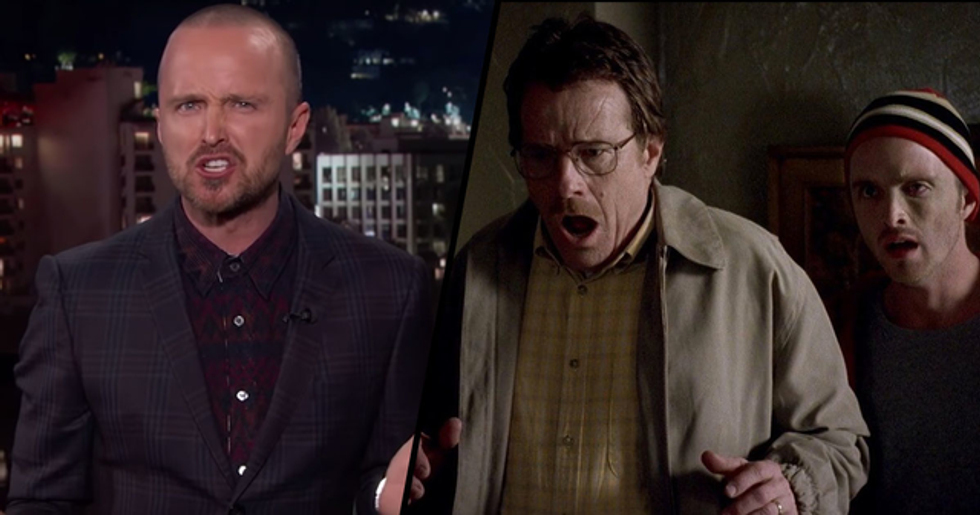 You may or may not have heard... But the Breaking Bad movie, El Camino, is landing on Netflix. Tomorrow. No, this is not a drill.

Breaking Bad fans have been patiently waiting (kind of) for 6 years to find out the fates of their favorite duo, Walter White and Jesse Pinkman. And now, that time has finally arrived.

Many fans have been eagerly rewatching the entire series in full (guilty) in keen preparation for the movie. But, for those of you who haven't just yet, hold your horses - Because you might not need to.

On his appearance on the Jimmy Kimmel Show this week, Aaron Paul, who plays Jesse Pinkman, delivered the best speedy recap of the entire show... And he managed to do it all in 2 minutes. Genius.

So, if you can't be bothered rewatching the full show, or listening to me ramble on any more about it, keep scrolling to see Aaron's swift recap.

The Breaking Bad movie is here, and fans all over the world can't wait.  Back in August, Aaron Paul surprised everyone when he casually announced on his Twitter account that a movie had indeed been filmed and completed, and would be landing on Netflix on October 11th.

It is understood that the movie will follow on from Jesse's dramatic escape at the end of season 5...

And that the plot will follow Jesse as he attempts to escape from his traumatic past of cooking for torturous neo-nazis.

An awful lot happened across the 5 seasons...

Though Walt and Jesse were the primarily consistent characters throughout the series, we saw a number of different characters come and go, as well as a lot of gruesome murders.

You can watch Paul's expert recap here. You're welcome.
20%