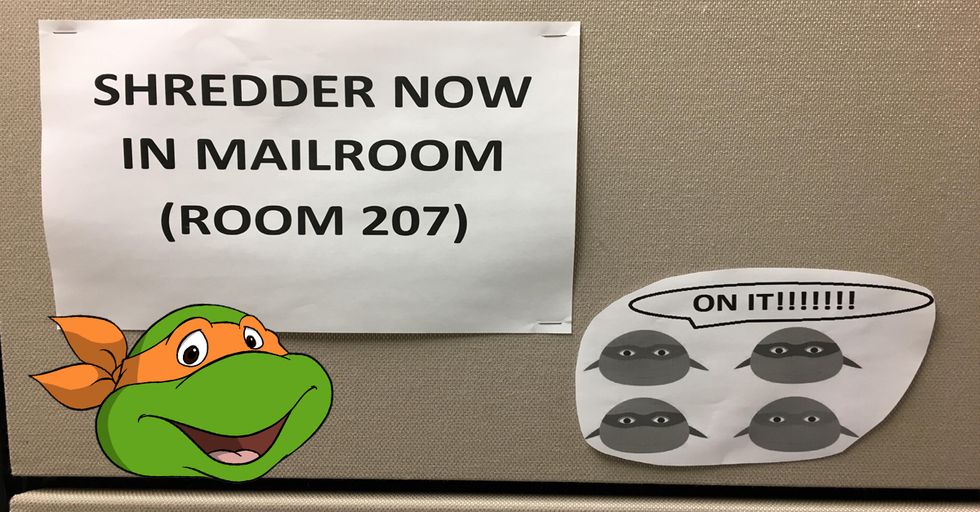 Passive aggressive people are the best. Is that a sarcastic statement? Maybe, a little bit. But I am genuinely entertained by them...when I am not directly affected by their antics, of course. The people who respond to public posted signs can be categorized as passive aggressive, but like, the fun, lighthearted kind. These people are finding what's funny where other people are serious.

Of course, the vast majority of these silly public notices happen in offices, where tensions are high. The people who are responding to these public fliers are just trying to inject a little fun into the workday. And for that, we applaud them. Enjoy this list of people who couldn't just see a sign, read it, and move on.

When you put up a sign in a public space, you are probably expecting that people will read and heed its words.

Well, that is not exactly what happened to these 29 sign posters. They got totally owned by way funnier responses to their signs, instead.

To be fair, this person didn't post any flyers. They posted all different types of birds that don't have the ability to fly.

Is this an official Geico ad? Because that company is pretty clever with its advertising and I wouldn't put it past them.

The coffee maker may have been broken and hot heating up properly, but that's no reason to insult its looks!

Get down off your high horse! Don't lock your bike to a handicap pole next time.

Shredder is in the mailroom? Don't you worry! The Teenage Mutant Ninja Turtles are on it!

When a teacher's poster outside her classroom was tagged, she graded it. Amazing. This teacher should win some sort of snarky response award.

This person left her desk for ten minutes and then came back to this. If you are that indispensable in your office, you should hire an assistant.

Aw, come on! This is super funny, but also really mean. But I do appreciate the effort.

This seems like the only logical interpretation of this sign. And it's a fair warning. It would be really hard to eat coffee that way!

Wow, there is a food thief going around the office that has some...eclectic taste in food.

Dave should be more careful about the rhetorical questions he asks because chances are, yes, there is another person named Dave in that office.

Fortune 500 companies should not use Comic Sans, but then again, neither should lemonade stands. No one should use Comic Sans. Ever.

Well, now that sign is going to smell like day-old ketchup and there's nothing they can do about it. Day-old ketchup is such a gross smell.

"Education is not a noun"

Except for the fact that it 100 percent is a noun. The dictionary says education is a noun, and the dictionary knows about things like that.

This is so funny to me. I love the idea that people are just entranced by this reindeer mug. They just can't help themselves.

This is a hilarious representation of Dwight Schrute. Don't claim the bins are ten steps way when they're clearly more than that.

A toaster strudel is a sacred snack. That snack stealer is very bold to steal something that delicious and rare.

Maybe people walking in and out of it all day without its permission is enough to startle a door into being constantly alarmed.

The response is sarcastic, which is a brilliant move! That means that sign has to stay at zero days forever!!!

Wow, that's a lot of Bills. And the things is, several of them are really problematic.

Do not remove this seal

"Do not remove this seal. It is a very cute seal and it deserves to be there. So, do not remove it."

That, of course, is a picture of George Frideric Handel, the composer. What the original poster meant to write was "Handle is broken."

Wow. Harsh. Also like your ex, this machine appears to be full of salty chips (on their shoulder), if you know what I'm saying.

If a short staff is your problem, you could hire this punny person! He needs his taco.

Wow, I did not expect to be launched into an existential crisis when I printed my presentation today. Thanks a lot for that.

Listen, you have to go with the flow. Otherwise, you're going to be left behind. Share this with your favorite passive aggressive person!