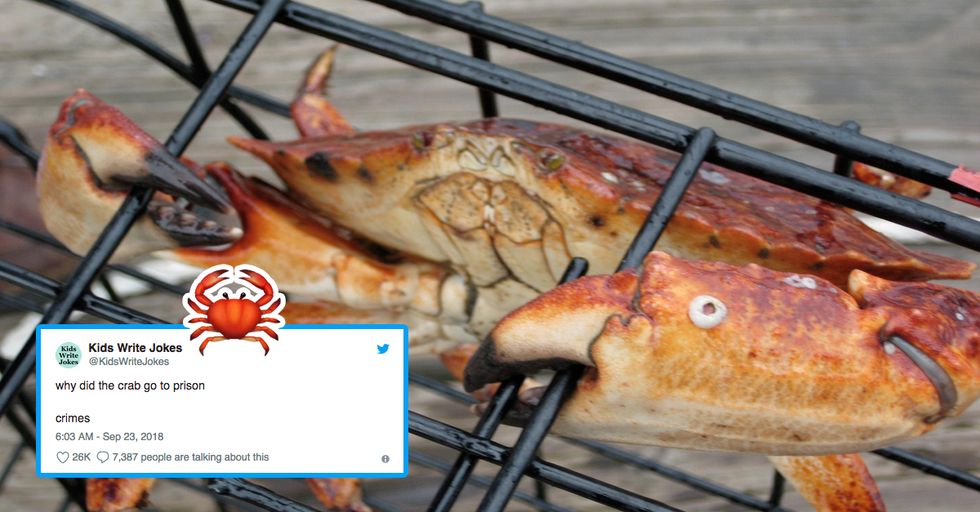 Absurd Jokes Written by Kids That You'll Laugh at Despite Yourself

I love a good joke written by a small child. Often times, they make no sense whatsoever, at least when you first hear it. And then you think about it, and it doesn't make any sense. And then, you think about it even more, and all of a sudden the absurd joke blows your mind with its depth and its relevance to your life and your struggles. Get ready to be launched into an existential crisis because that is exactly what these jokes by kids are going to do to you.

Following the @KidsWriteJokes Twitter account is one of the best things you can do for your mood in the year 2018. There is a lot of crazy stuff in the news these days, and all we can hope for is a little reprieve from the apocalypse we are all currently living in. These jokes are just that! Have fun reading!

And even though some of them are really good at good at telling jokes, there is no question that kids are way better at it. Here are 29 perfect examples of that.

This is a logical joke. Clowns are horrifying, scary creatures, especially compared to dinosaurs.

To be honest, if I was a doctor, I would have this reaction too! That would probably be the first question I ask.

I dunno, either. It's one of life's great mysteries. We all ask this question at some point in our lives.

Knock knock Whos there Sugar Sugar who Shake it or throw it on the floor! What are you doing? Those are the options!
— Kids Write Jokes (@Kids Write Jokes)1538237382.0

You either shake the sugar or you throw it on the floor. Is something about this joke not clear to you? It makes perfect sense to me.

what did the tiger say to the wolf and tiger? lets go catch some food my little,cool,blood eating frends
— Kids Write Jokes (@Kids Write Jokes)1538124507.0

Funny, "Let's go catch some food my cool blood-eating friends" is the same thing I say to my friends who are dressed up as vampires when we go trick-or-treating.

I think this is a very reasonable request and something Angelina would most likely say to Brad. Good joke kid.

This kid hit us with the anti-comedy! Of course, a crab would go to prison because it committed crimes. Why else does one go to prison?

That second pig is really wise. This is the other, less well-known pig-centered fable.

Nobody will ever know

I love this so much. Who wants to do math? This seems like an impossible problem to me!

Have you ever seen a naked cow? It's not a pretty sight. In fact, I would say "disaster" is a good word for it.

there was two fish in a tank and one of the fish said do you know how to drive this thing BECAUSE THE FISH ARE DRIV… https://t.co/tOvzms2Uxw
— Kids Write Jokes (@Kids Write Jokes)1534407922.0

What a twist! I did not see that one coming.

How about it?! How about when there is a silly man?! Just the concept of a silly man is funny enough.

The absence of a mountain is, I have to admit, probably the best reason I've ever heard for not climbing one.

Ah yes, a fresh take on the old "chicken crossing the road" joke. Very fresh. As in, unhatched.

I was worried that the "not" joke construction had seen better days, but this one is pure gold. You can't go wrong when you mention Tom Hanks.

That's a lot of mysteries, but if anyone can solve them, I would say it is the mystery solvers of the world.

Get it? Werewolves are hairy, and people who make pots are potters! Harry Potter!

So, "poooooooooooooooo" is not how you say "hello" in French, but any joke that has "poo" in it is hilarious to me, no matter if it makes sense or not.

Seriously though. Which came first, the fruit or the color? I need to know.

This makes sense! I don't know how elephants hear anything. On another note, elephant ears are delicious pastries.

And I think the ocean has every right to say that! The ocean is large and terrifying. We should probably get out of there.

Love a good booger jokes. Boogers are never not funny.

Oh, this isn't a joke. I just wanted to let you that the goblin has fully recovered. He doesn't have to wear his little goblin boot anymore.

Leopard with one eye

This isn't a joke either. I'm just genuinely curious what you call a leopard with one eye. Someone, please tell me.

An eye for an eye, a poop for a poop!

Look, Uncle Kevin is going through a tough time right now and he just needs some peace and quiet. Let him have this.

Um, duh. Where else would a turkey be going? Share this with someone who appreciates the silliest of silly jokes!