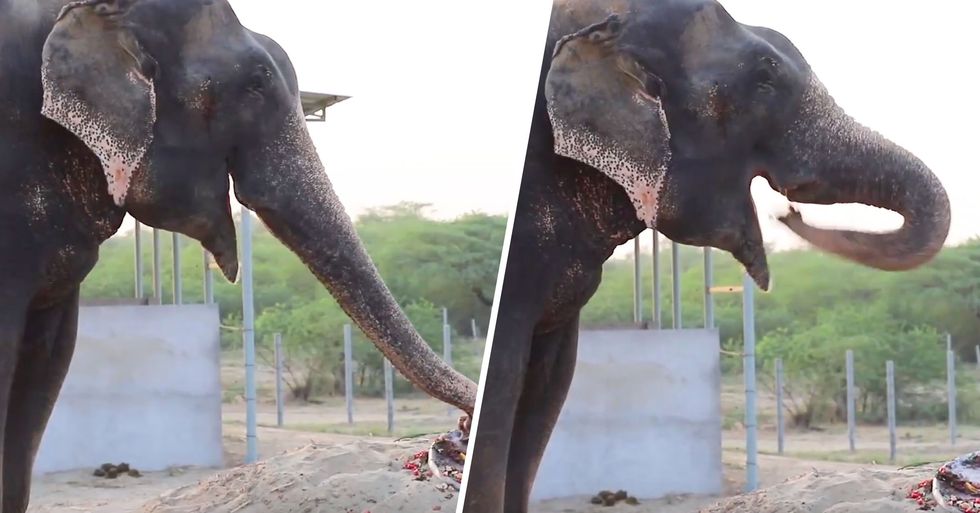 In spite of the current positive news in the environmental sphere, it seems as though there are certain people out there who still simply do not care for our planet and its animal inhabitants.

Elephants, in particular, endure immense suffering and abuse as well as being targeted by trophy hunters. But there can be light at the end of the tunnel, as today's story about an elephant named Raju proves.

Keep scrolling to see the unbelievable before and after pics as well as a clip of the elephant now.

And poaching isn't the only suffering elephants endure...

Many are abused, held captive for entertainment purposes, and passed on from owner to owner.

Numerous organizations have been known to abuse and exploit their animals.

The use of animals in circuses, for example, in which they are forced to perform tricks and wear human clothes, has been branded cruel and inhumane, and, ultimately, it has been made illegal in several parts of the world.

Circuses required animals to travel hundreds of miles every year in small and confined spaces, and as Animal Equality stated, people who visit an animal circus will learn nothing about an animal’s natural behavior, and, instead, will only see an animal stressed and anxious due to constant slavery. Many circuses around the world have seen the impact that this has had on animals and have made the wise and kind decision to no longer involve animals in their practices.

Festivals around the world have been known to use animals as part of parades and for entertainment value, and some are designed to celebrate animals themselves.

But there can be light at the end of the tunnel...

Sometimes these elephants are lucky enough to be rescued.

And this was remarkably the case for an abused elephant named Raju.

Raju has endured fifty years of abuse, starvation, and humiliation.

It is believed that Raju was captured as a baby...

And has been passed from owner to owner around twenty-seven times in his life.

For half a century, Raju has been subject to unthinkable abuse.

He has been held in spiked chains, starved, and beaten for most of his life.

Every day, he was forced to hold out his trunk to beg for money and food from tourists.

And was discovered bleeding from spiked shackles,  living solely on handouts from tourists - clinging onto life by eating plastic and paper.

Raju was freed by a rescue operation back in 2014.

“His cruel handler even tore out the hair from his tail to sell as good luck charms. The exploitation and abuse just had to stop," Kartick Satyanarayan, founder of Wildlife SOS, a wildlife charity, said, as per MailOnline.

Wildlife SOS was made aware of Raju by the Uttar Pradesh Forest Department in India.

Although it took an entire year for him to be freed. Pooja Binepal, the U.K. spokesman for Wildlife SOS, explained: “He hasn’t been fed properly and tourists started giving him sweet food items and because he was in a state of hunger and exhaustion he began eating plastic and paper."

To save Raju, a midnight operation was launched in July 2014 by a 10 man team of vets and wildlife experts from the charity.

The rescue operation took place at night in order to ensure few people as possible got in the way and to protect Raju from the sun.

However, Raju's owner wasn't giving up without a fight...

“He began to shout commands to terrify Raju—and try to provoke him," Satyanarayan revealed. “It created an incredibly dangerous situation as a bull elephant could snap a human like a tooth pick if he becomes afraid or angry. “When that failed he then put a series of chains around his legs in an attempt to prevent us removing him, so viciously tight that were cutting into his legs."

But when the team did manage to free Raju, they couldn't believe what they saw...

They were astonished to see tears rolling down the mammal's face.

“It was so incredibly emotional for all of us. We knew in our hearts he realized he was being freed."

“Elephants are not only majestic, but they are highly intelligent animals, who have been proven to have feelings of grief, so we can only imagine what torture half a century has been like for him."

Once Raju was given additional sedation, he was then escorted on the back of an open-top lorry to the charity’s Elephant Conservation and Care Center in Mathura.

“Incredibly he stepped out of his truck and took his first step to freedom at one minute past midnight on July 4, 2014, which felt so extraordinarily fitting," Satyanarayan explained.

The moment they cut him free from the shackles was extremely tearful for the team...

"We all had tears in our eyes as the last rope which held the final spike was cut and Raju took his first steps of freedom."

Post rehabilitation, Raju is living a happy and full life at the Elephant Conservation and Care Center in Churmura.

“The past five years with Raju has been an incredible journey for all of us. His determination to get better has accelerated his recovery to an extent that nobody was sure was possible." “Watching Raju enjoy his retirement in peace fills our heart with happiness and keeps us motivated to help other elephants that continue to be treated with such cruelty, as he was." Want more elephant news? Keep scrolling to see the moment a wild elephant walks into a Sri Lankan hotel...