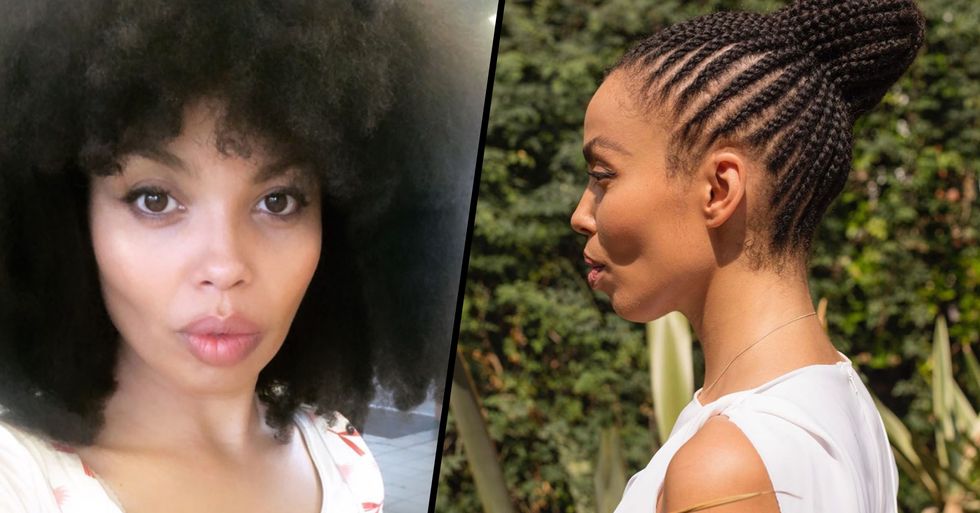 One thing we must understand as a collective is that even though we're moving towards equality, we're not there yet. In such a progressive society, we still have instances of discrimination based on skin color, religion, and class. In an ideal world, these differences wouldn't prove to be such a barrier, but it's stories like this that prove that they're still apparent.

Previous cases have led academics to believe that schools are unconsciously teaching black children to hate their hair. And now a new case on the other side of the pond has made the news for its discriminatory aspects which has just proved their point right.

Keep scrolling to find out exactly what happened.

Everyone has the freedom to wear what they want.

In the United States of America, we have fought for the right to express ourselves how we see fit.

However, this is taken away from certain individuals.

And no one understands this better than the African-American community. Previously, all across the globe, typical features that came naturally to the community were stereotyped as "ugly" and "undesirable."

And these stereotypes were also upheld by laws.

Natural hairstyles such as the afro and dreadlocks have been banned from the workplace, rejected from society and recently become the prime source of cultural appropriation.

On July 3rd, 2019, California became the first state to ban discrimination against one's natural hair. Governor Gavin Newsom passed the Crown Act law, which banned employers and schools from discriminating against hairstyles such as afros, braids, and locks.

But it seems as though this hasn't made much of a difference.

Professional and academic institutes have recently been accused of sending a derogatory message about black and natural hair styles. And this comes in all sorts of forms, from hiding behind uniform regulations all the way to being blatantly racist.

In December 2018, a young athlete was forced to cut off his dreadlocks by a referee in front of an audience in order to compete in a wrestling match.

He was given 2 options: Cut them off or forfeit the match.

Referee Alan Maloney determined that wrestler, Andrew Johnson was breaking protocol by having dreads as it did not align with the regulations of "long hair."

Johnson was taken to the sidelines and had his locks cut off with a pair of scissors.

That's right, not once was this rule mentioned to him by his coach or any other official. After spending all season training, he felt as though it was the only option, so proceeded with the chop.

An investigation into the incident was filed.

In the end, a report concluded that New Jersey officials ruled the regulations to be discriminatory against various traditionally black hairstyles regardless of length, which was Maloney's original excuse.

As part of an agreement, wrestling officials had to be given proper training.

The Guardian reported: "As part of Wednesday’s agreement, the athletic association will provide in-person training to all wrestling officials in the state before the start of the season to emphasize that the rule in question is based on hair length, not hairstyle." Alan Maloney got off lightly as he was only suspended for 2 seasons.

And two years on, another similar incident recently occurred.

DeAndre Arnold, a senior at Barbers Hill High School in Mont Belvieu, Texas has been given a similar ultimatum: Cut off your dreads or you can't attend graduation.

For the past few days, he has not been attending school.

The teenager was also told he might not get to attend his senior prom if he doesn't follow through.

Even though the school allows dreads, apparently Arnold isn't.

The school states that all males can't have hair longer than the eyebrows or ear lobes, and must be kept shorter than the top of a T-shirt collar.

His mother told CNN that he ties his hair up so he isn't breaching regulations, but it seems as if the establishment is taking drastic actions against him.

She also said this:

"He should get to choose who he identifies himself as, and he shouldn't be discriminated against," she said. "You don't tell girls they can't have short hair. It's so much bigger than DeAndre."

It is much bigger than just 2 or 3 cases.

Ruby Williams, fourteen, was told that her afro didn't allow other children to see the board. However, she took the matter to court and won a 10,947 dollar payout for being humiliated and degraded in the classroom.

She claimed it destroyed her confidence.

After hearing about this girl who was from the United Kingdom and how she was discriminated against, an academic has called out the education system for unconsciously teaching young people that black or natural hair is deemed "shameful."

Author Emma Dabiri is calling for the protection of black students.

She claims, and with a significant amount of proof, that there is an "epidemic of school exclusions" aimed at students who "are forbidden" to wear their natural hair in schools.

She also explained why these kinds of policies are toxic.

She told the Metro this: "It isn’t applied evenly to everybody because it’s a standard that suits the characteristics of European textured hair. The phrase “tied back" is so culturally loaded. My hair doesn’t just tie back. If I was going to tie my hair back in a way deemed neat, I would have to straighten it first, or apply a lot of gel and styling products and scrape it back."

"It’s really the equivalent of telling a European person, 'just wear your hair in an afro.'"

It's important that we all get educated on issues such as this one as it can have a detrimental effect on students and other young people growing up. No one should ever be made to feel like they can't be themselves. Keep scrolling to see some amazing afro hair art.