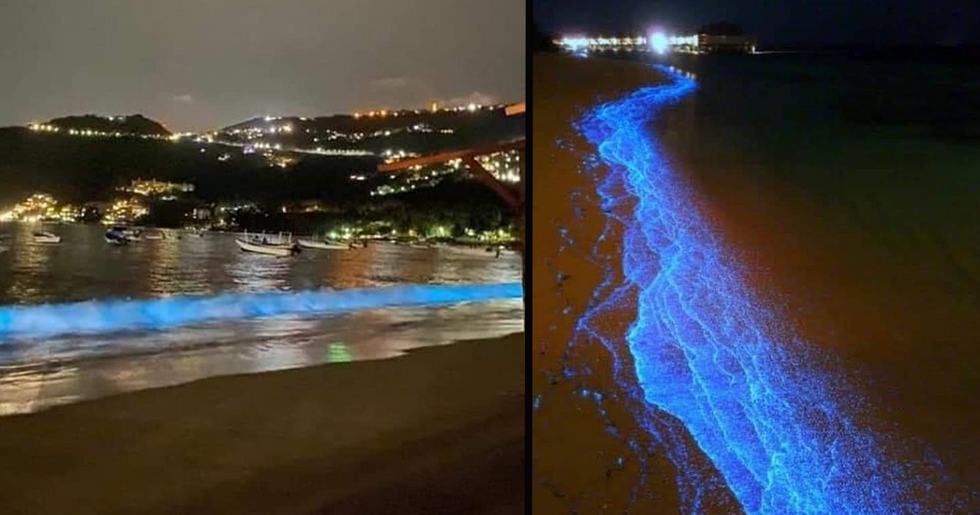 It's rare, but some people walking along the beach in Mexico were lucky enough to spot it.

Keep reading to see these amazingly rare pictures...the reason behind its appearance is certainly unexpected.

We might not be able to see a lot of nature recently, given the current pandemic.

As many of us are staying indoors.

It makes us very appreciative of the little exercise that we can do.

Even if it's just one walk per day.

To go out and enjoy our surroundings is not as possible at the minute.

It has become a luxury.

The outdoors is thriving.

With a decrease in cars on the road.

Some countries are seeing a drop in air pollution.

Whilst others are seeing their streets much cleaner.

A small positive in the current hard times.

And the positives are what we need at the minute.

Something that can bring a little bit of joy or excitment.

If you're looking for a bit of excitement and something amazing.

Then you'll want to keep reading.

As something incredibly rare has been spotted on a beach in Mexico.

So rare in fact that this is the first time it has happened in 60 years.

This rare sighting was spotted by a few lucky people that were walking along the beachfront.

When they were treated to the impressive show.

And luckily they snapped some pictures.

Probably because they couldn't believe their eyes.

You can see from the pictures how luminescent the water is.

Now you must be wondering how this happens.

No, it isn't just that someone has put lots of glow sticks in there.

Instead, the strange glow is caused by plankton near the shore.

Not just any plankton though, this is bioluminescent plankton.

A by-product of a biochemical reaction.

Triggered by the microorganisms at Puerto Marqués beach in Acapulco.

Whilst we might presume it was the result of the lack of human activity due to the lockdown.

Marine biologists have confirmed that this is not actually the case.

One biologist called Enrique Ayala Duval, spoke to Sabersfin.com to explain the reason behind it.

"Bio-luminescence is the light produced as a result of a biochemical reaction in which most of the time luciferin [protein], molecular oxygen and ATP [adenosine triphosphate] take part, which react by means of the enzyme luciferase in the following way:

"Oxygen oxidizes luciferin, luciferase accelerates the reaction, and ATP provides the energy for the reaction, producing noticeable water and light at night."

"There is a hypothesis that the bio-luminescence that exists today is the result of evolution", he continued.

"Initially, when the Earth's atmosphere had an almost zero concentration of oxygen and oxygen was gradually increasing due to the increasing presence of photosynthetic organisms, organisms were released from oxygen, which was then toxic to them with the bio-luminescence reaction producing water."

Did you get that?

Unfortunately, the beauty was too much for some people to resist.

As one person couldn't resist jumping straight in.

Which isn't a smart move from them...

Especially, given that bathing in the sea is currently banned in Mexico.

But we won't let that take away from the beauty...

Especially given that it could be a long time before we see it again.