This Accidental NSFW Headline About Julia Roberts Is Hilarious | 22 Words 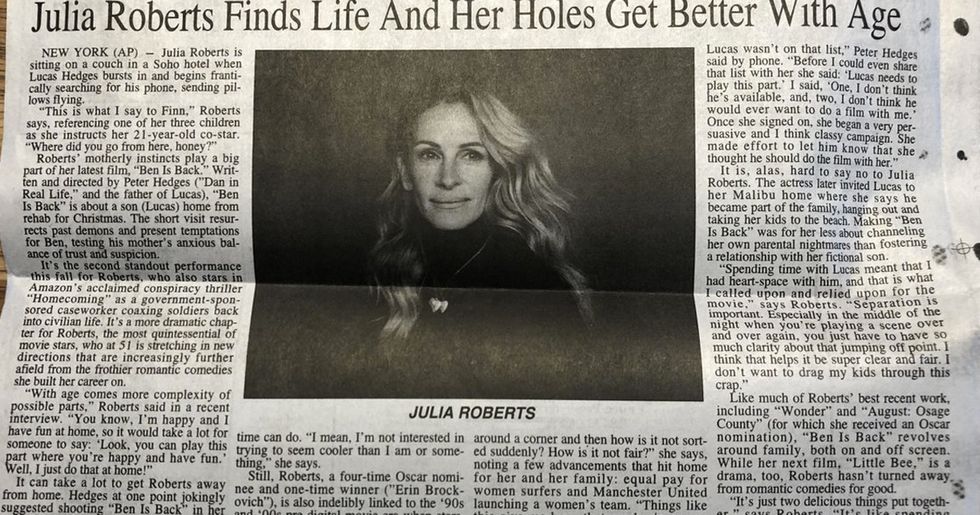 This Accidental NSFW Headline About Julia Roberts Is Hilarious

This past Saturday, the Jamestown, New York Post-Journal published a story about Julia Roberts' role in her new film, Ben is Back.

Ben is Back is a drama written and directed by The Odd Life of Timothy Green director, Peter Hedges. The movie stars Roberts, supported by Hedges' son, Lucas Hedges, as well as Courtney B. Vance. The plot follows Ben, a troubled young man coming back from rehab. Critics have praised Roberts' emotional performance as a mother worried for her son's life.

But back to this newspaper article...

The original title of the article was much more demure... and accurate.

It was meant to say "Julia Roberts Finds Life And Her Roles Get Better With Age."

In fact, Roberts has been busy with a lot of interesting roles lately.

In addition to Ben is Back, Roberts most recently stars in Amazon television show, Homecoming, based on the critically-acclaimed Gimlet podcast of the same name. The series is directed by Sam Esmail (director of Mr. Robot) and also stars Sissy Spacek.

If you haven't seen the show yet, I can't recommend it enough.

It follows the mysterious journey of a soldier's homecoming and reintegration into civilian life. But not all is as it seems... Let's just say that those who have seen the show may never eat pineapple again.

All of this means Roberts is back in the press right now.

Many fascinating articles have been written about her, including "Julia Roberts knows what she wants, and being a ‘movie star’ isn’t high on the list," written by journalist Amy Kaufman for the LA Times. In the piece, Roberts tells Kaufman, "I think with age comes complexity and the opportunity to portray different people. Everybody in their life is going to experience heartbreak or unrequited love or chasing a boy or a girl. Everybody is going to be somebody in My Best Friend's Wedding at some point in their life. I think there is less of that kind of commonality in some of the parts I play now."

So how did the Post-Journal get it so, so, so wrong?

No explanation for the mistake was given, but they did issue a correction clarifying the headline's typo. “A headline on Page D4 in Saturday’s Post-Journal should have read ‘Julia Roberts Finds Life And Her Roles Get Better With Age,'" they wrote.

But the hot takes were just beginning...

Honestly, this one is just too good to pass up.

Lastly, friends, I will leave you with this X-rated mash-up that literally no one needs.

But there you have it. Copyeditors are important, folks!