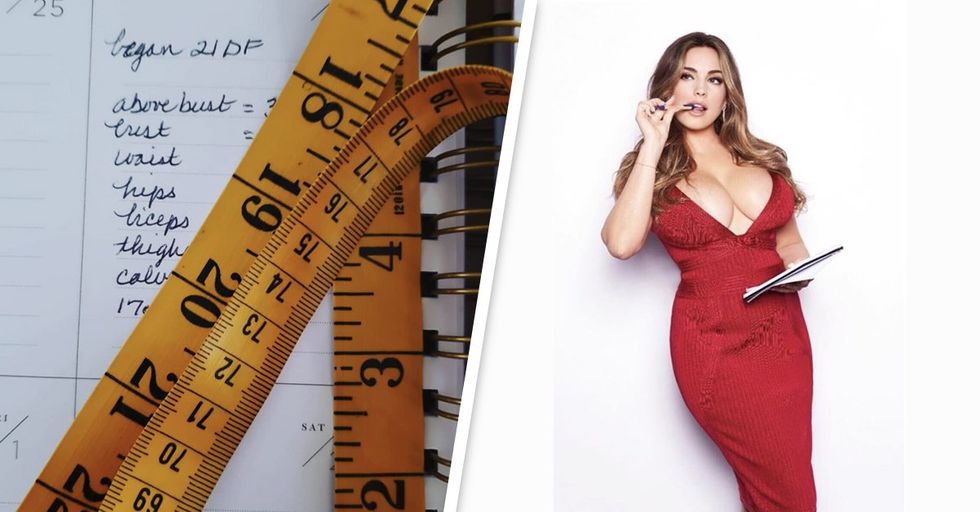 According to Science, There Is an Ideal Woman's Body and Here's What It Looks Like

Imagine the perfect female body: a model's body perhaps. Tall, thin, with perfect curves. That is not the perfect woman's body. At least it isn't according to blogger David Wolfe, who obviously should have the final say in what every woman does with their body.

According to him, the ideal female body is not about selling clothes, as a model does – it's about displaying fertility. What a cool concept, David! A woman's worth is based on their ability to make babies right?

But this idea isn't just coming from David Wolfe. Oh no. It's based on science and thus cannot be biased in any way. Oof. Don't worry friends, your body is perfectly ideal the way it is, and this David guy is a complete goober. Let's look at what science, psychology, and sociology actually have to say on the subject of body size. I bet we'll find a different answer than Mr. Wolfe.

So who the heck is this David Wolfe dude anyway?

If you're never heard of David Wolfe you can probably count yourself as lucky. This raw-food advocate is well known for pseudoscientific claims and for bringing his brand of nutrition to Hollywood.

Any why is he talking about women's bodies?

Well, we don't know, but he did. In a recent article on his website, he shared a study from the University of Texas, saying that "This is what the ideal woman's body looks like, according to science."

This isn't a bad article because he's not saying women should be skinny like models.

In fact, the ideal body is kind of plump!

We give you the greatest backhanded compliment of all time: sharing a picture of a woman who supposedly has the "ideal female body" and then calling it plump.

According to the statistics in the article (which inexplicably are in metric despite the study coming from Texas), the woman should be 1.68 meters in height with bust/weight/hip measurements of 99-63-91.

Somehow they've managed to find someone with these exact dimensions.

And what a surprise, she's a model! Her name is Kelly Brook, and for some reason Wolfe's article features photos of her in a bikini. Cool cool cool.

So where did these numbers actually come from?

Well, this is where things get really weird.

The study is impossible to find.

Despite the fact that there are dozens of easily accessible articles referring to the study (and the measurements, and Kelly Brook), only one contained a link to a University of Texas article.

Not only is that link broken, but it's to a study about men's preferences in spine curvature, not size.

David Wolfe certainly doesn't provide us with a citation.

He does send us to a newspaper article reporting almost exactly what he's already said.

Not only is the original study impossible to find, but the reported methods are suspect at best.

Many articles report that the scientists took into account height, weight, length of hair, face shape. Apparently, they then asked what men preferred. Perfect method!

David Woolfe knows why this is important.

He suggested "And what makes attractiveness so important, you ask? Well, it signifies the most important trait a human can have, scientifically speaking – fertility." Holy moly David, get your mind out of the gutter.

Instead, let's talk about what's so deeply wrong and offensive about the whole concept of an ideal woman's body.

First and foremost, women's value is not predicated on how they look.

Simple, right? Apparently, it's not so simple for all the scientists who are obsessed with studying what body is most appealing to men.

They actually exist for women to live in, and their functions as part of an actual human being are more important than how aesthetically appealing they are to dudes.

It's so damaging to talk about what women's bodies SHOULD look like.

Real talk: every day women are told that there are things wrong with their bodies. Ads tell us. Men tell us. Our moms tell us. If you can find me a woman who naturally feels good and happy in their body, I'll die of surprise.

Creating another way for women to be imperfect is a pile of BS.

Even if this article isn't telling women to lose weight, it's creating another point for us to compare ourselves against...and find ourselves wanting. Who has curves like that? WHO?

Negative body image is already rampant among women and girls.

According to one study, 91% of women are dissatisfied with their bodies. 58% of college-age women felt pressure to be a specific weight.

Do you want to know what happens when you give a generation of women bad body image?

Eating disorders are what happens. Fun fact: anorexia is the single most deadly mental illness. Think about that the next time you criticize someone's body.

And can we TALK about the sexism?

But perhaps even grosser than even the concept of an ideal woman's body is the fact that this body was found based on men's preferences.

The theory is that the best body for a woman is the one that signals fertility most effectively. Not the one that is healthiest.

Not the one that allows the woman to do the things she wants to do.

Not the one that she feels happy and comfortable in. It's the one dudes want to bang.

But obviously, there was no bias in THIS science.

It was 100% objective to decide that the measure of a good woman was whether she's making babies.

But isn't that what women are FOR?

It turns out that there are far more important things about women than whether they're making babies. Who knew?

While men do face a fair amount of pressure to conform to certain standards, it's not quite the same as it is for the ladies.

During a study researching what women found attractive, researchers focused on strong vs. weak looking bodies rather than fertile vs. infertile bodies. Interesting. Almost as if they thought men had a purpose other than babies.

Well, this is all just a bummer.

If this concept of an ideal body is so harmful and unscientific, what can we do to combat it (besides stop funding totally ridiculous studies)?

It's not actually all that important. Stop bonding with your friends over diet talk. Come up with some compliments that aren't based on appearance. The less you talk about it, the less you'll notice it.

Focus on the things your body does well.

Notice and appreciate when your body is successful, whether it's getting through a workout, helping you complete a project, or even all the pleasurable experiences you get through your body (yeah, I am talking about sex). You can even notice when someone else does something cool and impressive with their body!

Sure it's hard because awful articles like this are everywhere, but we believe in you! Surround yourself with positive messages about all kinds of body types, and eventually, you'll just be able to laugh off David Woolfe and his weird obsession with thick hips.