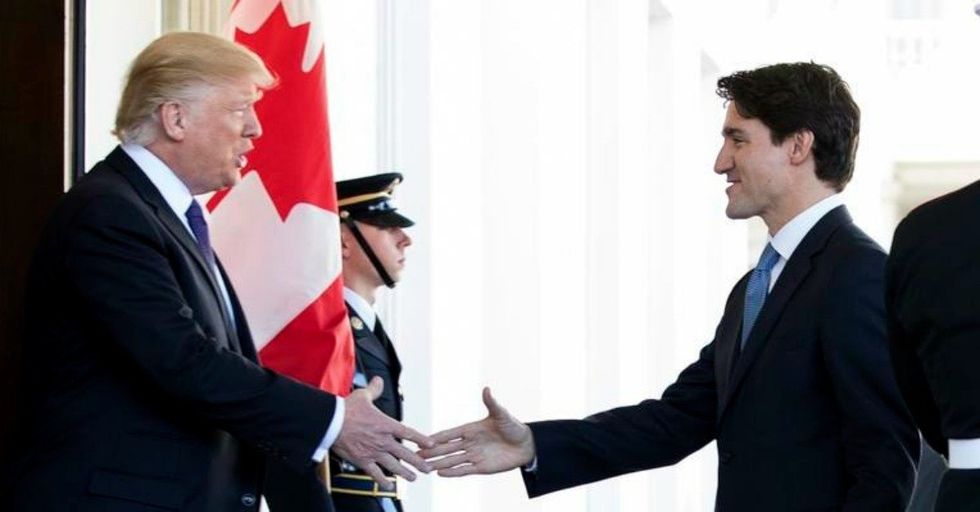 According to Experts, This Is Why Donald Trump Shakes Hands In Such a Weird Way

Jokes about Donald Trump's small hands are pretty played out, but have you ever noticed the weird way he shakes hands? If not, you're not going to be able to not notice after checking this out — and finding out why he does what he does (at least in terms of a handshake).

It started normal enough, but then Trump yanked it back like he was trying to rescue poor Neil from the side of a mountain.

Gorsuch even has to adjust how he's standing to keep his balance, with Trump adding a couple unnecessary pats to the back of Gorsuch's hand for good measure.

You might think this is a one-time thing, but it's not if you ask Japan's Prime Minister Shinzo Abe.

Once again, Trump pulled the other person's hand toward him, so this is definitely something Trump is doing on purpose.

So naturally now the question is, "What does this mean? Is it just a weird thing he has or is it some kind of power play?" According to psychologist and body language expert Dr. Peter Collett, Trump is definitely trying to show dominance. Apparently that there are two kinds of greetings.

There are solidarity greetings, which show that two people are equal.

This is indicated by a symmetrical gesture, like the typical handshake.

The other type of greeting is the power greeting, where one person asserts that they are in charge.

This is indicated by an asymmetrical gesture, like the arm-yank in Trump's case, which can be explained in two ways. First, Trump has an irresistible urge to bring people closer to him, to get them on side, and this expresses itself in his habit of pulling people towards him. Another explanation for the “yank-shake" is that it enables Trump to impose himself on the situation by catching the other person unawares and doing something that they hadn’t anticipated.

Unless you're Canadian Prime Minister Justin Trudeau, who had apparently been briefed on Trump's odd handshake habit and was ready with a plan.

As Trump extended his hand, Trudeau stepped right up to him, grabbing his right arm with free left hand.

As Trump was moving his left arm to Trudeau's shoulder, Trudeau did the same thing to to Trump's shoulder.

Not only that, but Trudeau moved in so close that Trump had no room to yank his arm, which was actually kind of brilliant.

The result was that Trump was left without the feeling that he had the upper hand over Trudeau for the rest of their meeting — and a million great memes.

So what can we conclude? "It’s hard to escape the conclusion that Trump’s attachment to it lies in the fact that it enables him to take control and impose himself on the person whose hand he’s shaking," Collett said. "However, by doing so he displays his disregard, possibly even his contempt, for the sacred symmetry of the handshake and the precious opportunity that it offers us to treat each other as equals. There’s no way that Trump can yank people’s hands and still claim to uphold the principles of egalitarianism."