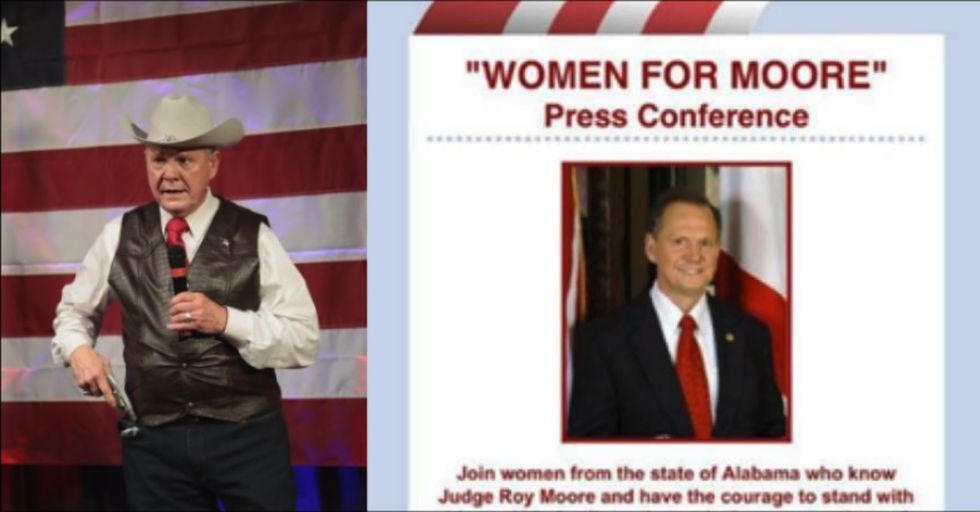 That all sounds great...unless you've been keeping up with the news and know anything about Roy Moore. Suffice it to say he's probably the last politician who should be holding a women's rally.

Well, maybe second to last. He's never been recorded talking about grabbing women's genitals, after all.

Regardless, this is definitely not great optics for the Alabama Senate hopeful.

Moore's wife Kayla shared a flyer for the rally on her Facebook page yesterday.

The point of the rally? "To stand with [Moore] and his family against salacious accusations of s*xual misconduct." Yes, the word "sexual" is censored.

In case you've forgotten about those "s*xual misconduct" allegations...

Moore has been accused of having inappropriate and non-consensual relations with multiple underage girls. The Washington Post reported that he had a sexual relationship with a 14-year-old girl when he was in his 30s. Since that initial report, several more women have come forward with their own accounts of Moore acting inappropriately. One woman even claims Moore tried to rape her.

So having a "Women for Moore" rally?

A bad idea. A very, very bad idea. There are so many better things Moore could be doing. Like dropping out of the race, for instance.

Moore, a man accused of raping women, is hosting a rally...for women. Who greenlit this idea?

There's another word for this particular type of rally:

Earlier this week, Moore threatened Mitch McConnell to a Twitter duel (lol) by tweeting "Bring. It. On." You know, like the cheerleader movie! Maybe there will be cheerleaders at this rally. Moore's dream come true! But Twitter wasn't done reacting yet...

This Twitter user speculated on Moore's original purpose of the rally:

At least someone talked him out of that plan. Although the rally is still happening, so that's a definite fail.

And of course, the timing of the rally could not have been much better.

We wouldn't want anyone out past their bedtime, right? We wonder if he called any local schools to get the numbers of students who went there. He's done it before! Ugh, Roy Moore, stop this madness. Just drop out already. This is not going to go well for you.