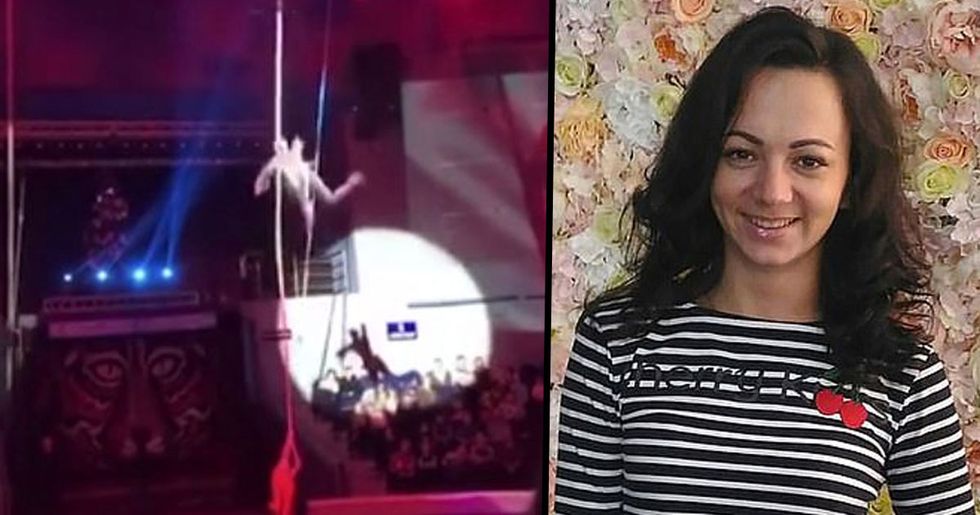 Acrobat Fighting for Her Life After Horror 20ft Fall

A female acrobat has been left fighting for her life after a horrific accident took place during her performance at the Vladivostok Circus. Families and children were left screaming after they witnessed the performer fall twenty feet and onto the ground.

And this wasn't the first major accident to take place there that week.

Keep scrolling to see the videos of both incidents but I must warn you, they are not for the faint-hearted...

The Vladivostok Circus is one of the biggest attractions in the city.

The city is located in the Far Eastern Federal District and Primorsky Krai in Russia and has become quite the hot-spot for natives as well as tourists.

The show offers traditional circus fun for all the family...

From trained wild animals to dangerous high-flying acts, the show has become a spectacle for audiences.

But the main attraction that gets people talking?

There's nothing more exciting than seeing people put their lives on the line...

It sounds weird when you actually say it but that's exactly what it is. The "danger" element takes acts to a whole other level.

Some of the stunts are pretty wild...

We have high-flyers, tightrope walkers and crocodile kissers? Yeah, that's a slightly weird one, but it's very dangerous nonetheless.

And with that extra bit of danger, comes so many risks...

Keep scrolling to see the video of just how far people are willing to go to entertain crowds.

Recently, the circus has been thrust into the spotlight for different reasons...

2 of the performers were involved in two separate incidents that left parents and children screaming.

The first was an acrobat dressed as Jack Sparrow...

Sergey Makarov was in the middle of completing a tight-rope walk with no safety equipment. Everything took a nasty turn when he tried to put the balance beam down.

And he went toppling to the ground, landing on his head. In the video, which you can see at the bottom, he is seen trying to stand up but he falls straight back down and lays motionless.

The audience is shocked...

Some people, thought to be other performers, run out in order to check if he's okay, but he is not moving.

The only news we have is that Makarov is "still alive."

The performer sent a message out to his fans after the video went viral, assuring people the fall wasn't fatal. He is still recovering in hospital, however.

And just a few days after that incident, another similar one occurred.

Yelena Prikhodskaya was involved in an incident that has left her "fighting for her life."

The thirty-year-old was up twenty feet in the air...

The performer was showcasing her talents on the ribbon when she lost her grip. Even when she tried to grab it again, she missed and hurtled to the ground.

A spectator captured the terrifying ordeal...

You can hear the audience gasp and scream as they watched her fall, landing awkwardly on her head.

An eyewitness claimed that "the fall was very tough."

Prikhodskaya's assistant, who was holding the long ribbon at the bottom rushed over to her, shocked that she was not moving at all.

Prikhodskaya had suffered a cranial fracture and is currently undergoing intensive care.

She won't be able to perform for a long time. Maybe not ever if her skull doesn't heal. The extent of this injury could change her life forever.

The Vladivostok Circus has spoken out about the viral incident:

The claimed that there was "no defect" in the equipment used and that the accident was all down to basic "human error." How charming. One of your acts is fighting for her life in hospital and that's all you've got?

A statement from the circus read:

"The administration of Vladivostok State Circus is already working with police to find out the reasons for the accident and is closely monitoring Yelena’s condition."

But so far, there has been no word from the performer herself.

This isn't the first time this establishment has been in hot water for the state of their circus. 2 years ago, they were accused of animal cruelty for their "fat-cat show."

I think it might be time to call it quits... Have a look for yourselves:

It seems as if accidents are bound to happen no matter how well one prepares for them. If you want to read more about how another fellow acrobat got injured in London, then keep scrolling...