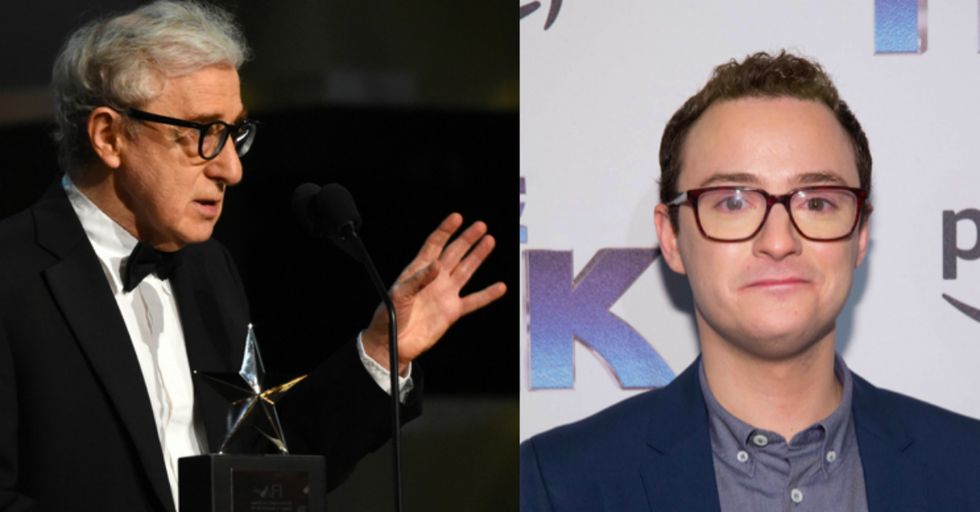 The allegations of sexual harassment and assault against film producer Harvey Weinstein have helped open the door for more women to come forward with their own traumatic experiences. It's also helped to ignite an important discussion about Hollywood's dirty secrets, and how powerful men are better able to get away with these types of assaults because of the fear of being blacklisted by the industry.

On October 15, actor Griffin Newman made a statement on Twitter expressing his regret over participating in a recent film by a well-known director who faced his own despicable allegations.

Griffin Newman is an actor best known for playing Arthur Everest in "The Tick."

Newman recently wrapped a new, unannounced project by a legendary filmmaker who, like Weinstein, is surrounded by his own fair share of sexual assault-based controversy: Woody Allen.

In the shocking piece, Farrow discussed the ways the Hollywood icon had abused her at just seven years old. "He told me to lay on my stomach and play with my brother’s electric train set," said Farrow. "Then he sexually assaulted me."

"After a custody hearing denied my father visitation rights, my mother declined to pursue criminal charges, despite findings of probable cause by the State of Connecticut – due to, in the words of the prosecutor, the fragility of the “child victim,"' Farrow said.

"Woody Allen was never convicted of any crime," she added. "That he got away with what he did to me haunted me as I grew up. I was stricken with guilt that I had allowed him to be near other little girls. I was terrified of being touched by men. I developed an eating disorder. I began cutting myself."

Farrow also called out several Hollywood superstars who appeared in Allen's films for their silence.

It was these allegations that prompted Newman's series of powerful tweets.

He begins the thread with a few straightforward statements. "I believe he is guilty," he said. So what did Newman do with his overwhelming guilt?  He donated his entire salary from the film to RAINN. But that wasn't all...

Newman also listed the reasons why he chose to appear in the film. "I was a coward," was one of them.

It's obvious that the actor has been struggling with his decision for a while now.

Newman expresses his profound guilt in the tweets, and explained how the recent allegations of sexual abuse against Weinstein have "compounded his guilt tenfold."

It's easy to see why, as an up-and-coming actor, Newman would accept a position from a director who holds as much clout as Allen.

It was probably the type of role that, while small, could launch his career, so the fact that Newman is coming forward with how much he struggled with his choice to accept the role is pretty impressive.

He even had a response for those who question his decision to wait to publicly state his opposition to Allen until after the film wrapped.

"I assure you," he said, "this was the worst combination of choices." Newman attached a link to Farrow's open letter to Allen in one of his final responses.

Newman's initial thread quickly went viral, and there were several responses that were both positive and negative.

He even ended up posting another thread in response to the negative comments. It clarifies some of the statements he made and reiterates that the first thread was in no way a publicity stunt, but simply an effort made by the actor to speak his mind and distance himself from the acclaimed director. So, what was the outcome?

He ends the thread on a hopeful note.

With all that having been said, if something good can come out of all this I hope it's support for @RAINN01. https://t.co/FijrQKPSLa
— Griffin Newman (@Griffin Newman)1508073975.0

With more and more women (and men, including actor Terry Crews) telling their stories, the perpetrators of these heinous acts are more likely to face the consequences. And maybe if we start believing the stories of victims instead of covering for the perpetrators, this type of thing will start to become less disturbingly common.