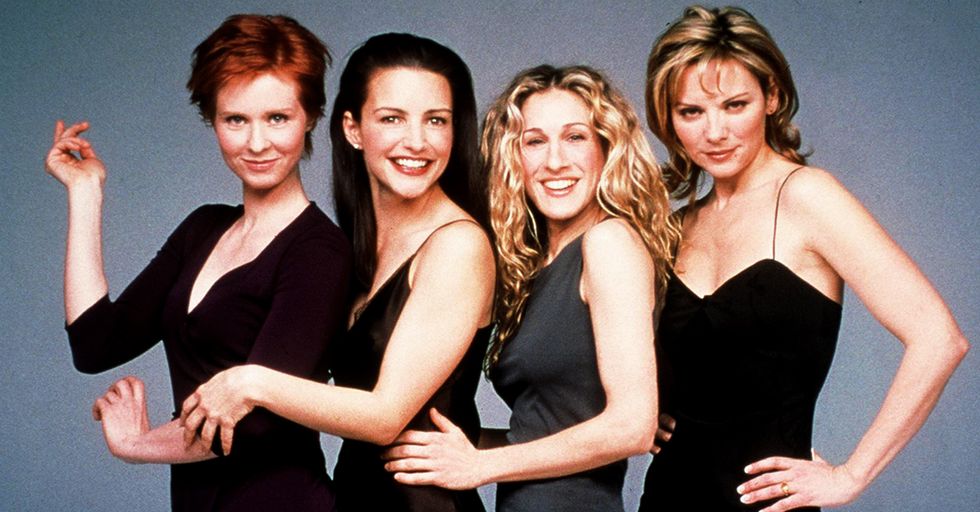 Shocking Cameos on ‘Sex and the City’ You Definitely Forgot About

When Sex and the City burst onto the silver screen in June 1998, it was a cultural juggernaut. It offered a vision of New York and single women that had never been seen before.

Unsurprisingly, lots of celebs had cameos in it. Lots and lots of them. Here are 20 of the most surprising.

Remember that arc when the girls went to Hollywood to talk Carrie's movie deal and ended up in a party at the Playboy Mansion? Yep, Hef was definitely there, his blonde girlfriends in tow.

The ever sexy Blair Underwood played Dr. Robert Leeds, Miranda's last boyfriend before she settled down with Steve once and for all.

Before he became President of the United States, Trump had a cameo as himself on SATC. He and Samantha even briefly flirted.

The second most famous Miranda in New York City can be seen in the background moving boxes.

Remember the guy with the funky tasting spunk? The one Samantha finally refused to go down on? Yeah, that was Bobby Cannavale in an earlier role.

Did you know Alanis Morissette was on SATC? She and Carrie even shared a kiss during a game of Spin the Bottle. How's that for ironic?

Kat played one of the most obnoxious characters to ever guest star on SATC -Jenny Brier, an uber-wealthy Manhattan brat who wants Samantha to throw her bat mitzvah.

Before he was the Bravo uber-host, Cohen was a shoe salesman with a very disquieting love of shoes.

Chandra Wilson has always been good at playing authoritative figure, which no doubt explains why she played a New York City officer on the classic episode of SATC where Samantha discovers Richard with another woman.

Did you know Bon Jovi was on SATC? Neither did we, but we're very happy we discovered this!

She'll always be Stifler's Mom to us, but once upon a time, she played a would-be handbag designer on SATC.

One of our favorite episodes of all time is when Samantha becomes Lucy Liu's rep and uses her newfound proximity to stardom to get herself a Hermes bag. Classy.

Margaret Cho as an uber fashion insider in Sex and the City? What's not to love? Also, she's the one responsible for getting Carrie to walk on the runway, and we all know how that turned out.

Remember when Carrie went to LA and dated Keith Travers, a seemingly wealthy man who turned out to be a house sitter? Well, that was Vince Vaughn.

It was Bradley Cooper's very first onscreen role, and he played Jake, a momentary love interest of Carrie's.

Matthew McConaughey plays himself in one of the SATC Hollywood episodes and charms the pants off Carrie.

Would you believe that Justin Theroux had not one, but two different parts in SATC season one, and both tried to get with Carrie? Legend.

Elizabeth Banks played the fiancée of a politician in the third season of SATC. She's the one who inspired Charlotte to throw an ill-advised singles mixer at her house.

Will Arnett tends to play charming but skeevy characters, and his turn on SATC is no different. He plays Jack, a boyfriend of Miranda's who's into lots and lots of public sex.

Buffy the Vampire Slayer herself played a cutthroat junior development executive in one of the Hollywood episodes. She killed it. Get it? Killed? Slayed? Oh, never mind... Don't forget to send this article to your favorite SATC-loving friend.