One of Rebel Wilson’s Male Co-Stars Sexually Harassed Her, and His Friends Tried to Film It | 22 Words 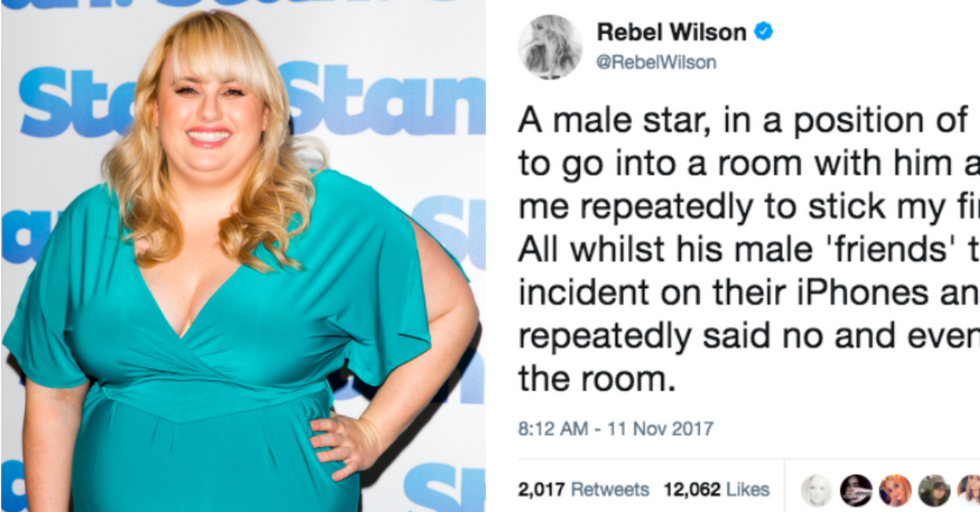 One of Rebel Wilson’s Male Co-Stars Sexually Harassed Her, and His Friends Tried to Film It

Ever since Harvey Weinstein was outed as a serial sexual predator, women and men in Hollywood have started coming forward with their experiences with their own "Weinsteins." While sexual harassment and assault are rampant in every industry, stories from Hollywood have hit particularly hard because many of these abusers were previously beloved public figures. Louis C.K. is the latest titan of the industry to fall after multiple women came forward with stories of harassment.

Now, actress Rebel Wilson has added her voice to the mix; she's shared her powerful experiences with harassment and pledged to stop being polite in instances where she's clearly being taken advantage of.

You know Rebel Wilson as the confident Aussie actress who's starred in films like Pitch Perfect, Bridesmaids, and How to Be Single.

Wilson took to Twitter on November 11 to share her own experiences with harassment at the hands of a male co-star and a "top director."

Wilson wrote that she's "been away in a 'bubble'" creating content overseas but that she's going to share her own story.

I've been away in a 'bubble' of sorts creating new comedy overseas but it's so hard to hear all these stories relat… https://t.co/fQl7QkbLAO
— Rebel Wilson (@Rebel Wilson)1510416560.0

If we've learned anything from all this, it's that almost every woman has their own story of harassment or assault to tell.

Wilson begins her story of a "male star" she worked with who sexually harassed her while his friends filmed it:

A male star, in a position of power asked me to go into a room with him and then asked me repeatedly to stick my fi… https://t.co/mXjyPuJTnB
— Rebel Wilson (@Rebel Wilson)1510416761.0

How disgusting is this? Wilson is a successful comedian, a strong woman, and she was reduced and violated by a coworker in such a heinous way.

I called my agent immediately and my lawyer made a complaint with the studio - basically to protect myself that in… https://t.co/XNKdnVFhQg
— Rebel Wilson (@Rebel Wilson)1510416856.0

We've learned that when women in the industry lodge complaints with their agents or with the studios that employ these harassers, they're often dismissed or told to just ignore it.

In this case, Wilson was actually threatened by one of the harasser's reps:

Later I was threatened by one of the star's representatives to be nice and support the male star. I refused. The wh… https://t.co/g1ku1WvRKM
— Rebel Wilson (@Rebel Wilson)1510417032.0

Absolutely insane. This goes beyond being complicit. But this also wasn't Wilson's only experience with harassment...

Wilson then went on to describe her own "'hotel room' encounter" with a "top director."

Earlier in my career, I also had a 'hotel room' encounter with a top director. I thought we were there to talk come… https://t.co/YqozAlSbAR
— Rebel Wilson (@Rebel Wilson)1510417259.0

"I thought we were there to talk comedy," Wilson wrote. She couldn't imagine that a professional man like him would try so blatantly to take advantage of her during what was supposed to be a business meeting.

Luckily, Wilson was able to escape the situation.

that I could hear her and I bolted out of there immediately. I was so naive the thought of anything happening apart… https://t.co/NUir62Sle6
— Rebel Wilson (@Rebel Wilson)1510417368.0

But she was obviously affected by it. As all women are.

Wilson then goes on to describe how she grew up in a "pro-female environment," has always been strong and confident, and was able to escape those situations.

She also notes that she knows that not everyone is as lucky. Just because she escaped her harassers doesn't mean that other women in situations similar to hers had the power to do the same. They were victims of abuses of power by stronger, more powerful men.

Wilson shared her stories to be a bastion of support to those who've experienced similar things.

To hear how prevalent sexual harassment and assault is, is just so saddening. I know my stories aren't as horrific… https://t.co/vzkrmARY18
— Rebel Wilson (@Rebel Wilson)1510418259.0

Chances are every woman you know has at least one story of sexual harassment and/or assault. It's maddening and it's horrendously sad, but the first step to making sure it doesn't happen again is to continue to share these experiences.

Wilson concluded with this badass sentiment:

"I know, moving forward," she wrote, "that if I witness this behavior, whether it happens to me or someone I know, I will no longer be POLITE. Interpret that as you will." There's a change coming. And people like Rebel Wilson are the reason for it.