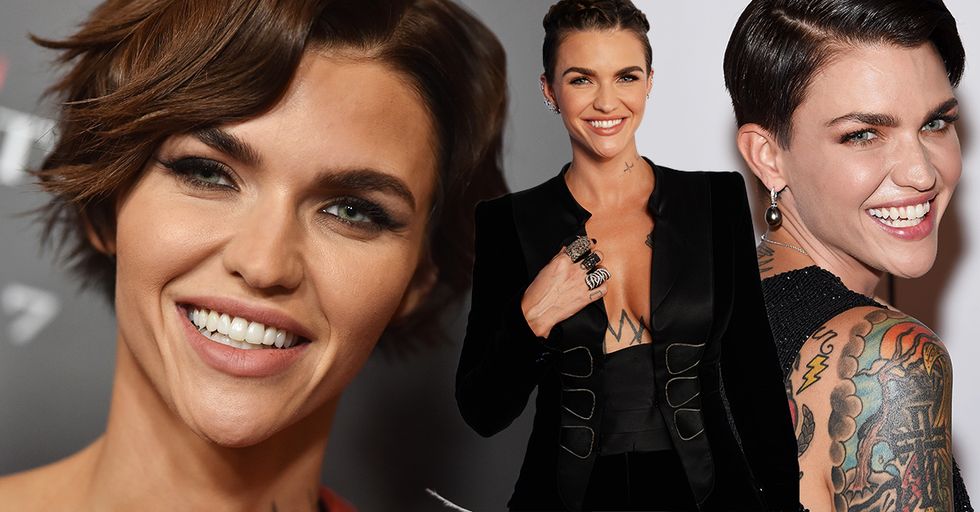 Orange is the New Black is a behemoth of television. One of the anchors of Netflix's programming, the show boasts a sizable audience which tunes in every year to binge-watch the antics of the lady inmates at Litchfield Penitentiary.

In 2015, however, Litchfield got a new inmate – scheming hottie Stella Carlin – played by actress Ruby Rose, an Australian model/VJ who quickly ascended into the mainstream based on her stunning androgynous looks.

In the time since, Rose has become a part of the Hollywood circuit and accrued tons of roles.

In fact, her turn as Ares, an enforcer for a mob boss in John Wick 2 was one for the evil sidekick record books.

Ares was lusty, kickass, and mute. In between fondling John Wick's crotch (while patting him down) and actually attempting to gun him down, she only spoke in sign language, a skill Rose couldn't continue using for the most sinister reason.

"The problem is that I only learnt words that I can't have conversations in," she said during an appearance on Late Night with Seth Meyers on Wednesday... "Unless I want to say, 'Hi, how are you? Would you like to die now or later?' and 'Run for your life, now quickly,' or 'I'm going to get you' - they're not things that you actually want to say to people.

Rose's modeling career has also since taken off.

She's been the face of Urban Decay Cosmetics since 2016, and is the face of Maybelline in Australia. She's also been featured in numerous magazines, including Vogue Australia, InStyle Magazine, Marie Claire Magazine, Cleo, Cosmopolitan, Maxim, Nylon and New York's Inked Magazine.

And to think, it all started with a short.

That's right, in 2014, Rose produced a short called Break Free, this is about "gender roles, Trans, and what it is like to have an identity that deviates from the status quo." The short quickly racked up millions of views, leading to her film career as it is today.

The short also helped shape her into a sex symbol.

As Rolling Stone opined, "If all goes well, maybe one day we'll look back on Ruby Rose as a major figure in America's slow march towards accepting gender fluidity." Rose is regarded by many people (mainly women, but men too) as one of the hottest stars of today. Which may have explained why she was so firm when the Daily Mail published unflattering reports about her.

British tabloid The Daily Mail published photos from her red carpet appearance, making sure to highlight Rose's thin appearance and the acne on the side of her cheek. They accompanied this coverage with quotes taken from LA dietitian Lisa De Fazio, who once said in an interview of Rose, "Her family and management team need to encourage her to gain some weight before it's too late."

The publication also added, "the actress only weighs 44kg, which would make her extremely underweight for a person of 5'7' - with 61kg being the recommended weight for her height."

Rose had previous blasted De Fazio for those very comments on Twitter.

"You are reckless and no Hollywood expert should behave the way you do," Rose said. "Telling a magazine MY 'manager, friends and family should get involved and help me before it's too late' and that my weight is '44 kilos' (I'd probably be in hospital if that were true) is so maddening and irresponsible."

When the Daily Mail published its article, Rose was quick to react.

She reacted to the magazine's story via Instagram Stories with a powerful rebuttal. "This acne belongs to me, not them, and you are welcome to it. I never thought I'd see the day I'd leave my beautiful country bawling my eyes out... when I was so excited to come home."

She further explained why she had acne on one side of her face and not the other.

"Yeah it sucks.. for me," the actress wrote, "I don't see how it's bothering so many others? But I'm a human. It happens.. one side of my face is clear and the other is a mess... Dermatologist says it's from the bacteria from all the phone interviews I did for PP3 and a reaction to hotel pillow cases (which I already know)..."

Rose also had words about the cruel inquiries into her weight.

Instead of the dozens of photos of me from behind they run only 1 photo to fit their narrative," Rose wrote. "So when the dailyfail resorts to making news stories compiled purely of people's 'comments' on my [Instagram] page... it's time to take that away from them to protect everyone" from harmful misinformation. So from the bottom of my heart I am sorry if those stories triggered anything in anyone.

Rose has deactivated comments on her Instagram page, and all we can say is – good for her. Mental health is no joke and we completely agree with any actions Rose takes to protect hers.