Actress Sarah Hyland Just Clapped Back at Plastic Surgery Rumors, Instead Giving THIS Explanation for Her New Look | 22 Words 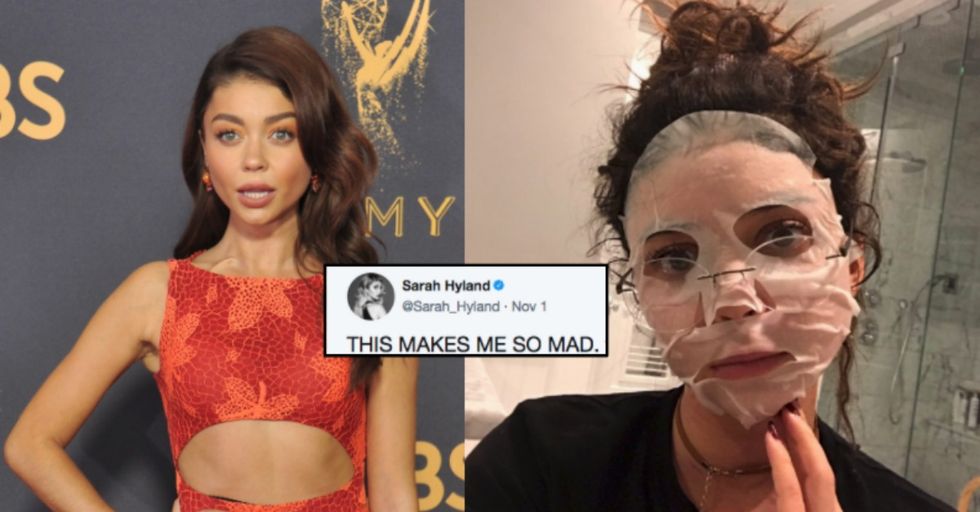 Actress Sarah Hyland Just Clapped Back at Plastic Surgery Rumors, Instead Giving THIS Explanation for Her New Look

A Life & Style article claimed that Sarah Hyland of Modern Family has been under the knife to alter her physical appearance. Hyland has been in surgery, but not for the reasons that the article claimed. She's been dealing with a serious medical issue and was offended that someone would say these things about her physical appearance. The actress clapped back at these allegations yesterday on Twitter.

The article has now been changed, but when it was first published it included doctors' analysis of Hyland's "transformation".

THIS MAKES ME SO MAD. to have Drs give their opinion ON MY FACE is absolutely ridiculous and degrading. Fuck off. https://t.co/8GlSIWJcfr
— Sarah Hyland (@Sarah Hyland)1509587773.0

Her appearance has changed over the years, but it's because she's taking a medicine that makes her face swell. It's not fillers, it's Hyland fighting health problems. She did go under the knife... when her dad gave her a kidney when she was in desperate need of one.

Sarah posted this note detailing why she was so upset.

She has had such a difficult year dealing with illness and thought it was in a horribly bad taste of the magazine to call her out for her physical appearance. On top of that, she didn't want to promote the idea that young girls should try to achieve her weight. She's sick and weighs less than she should because of it. She doesn't want to promote an unhealthy weight standard for young girls or appear as if she is actively trying to get thinner.

After Hyland posted the above comments, Life & Style edited the article to take out the doctor's comments.

Hey @Life_and_Style why don't you just delete the article about how different I look over the past 10 yrs instead o… https://t.co/RAOBmuUaSU
— Sarah Hyland (@Sarah Hyland)1509602491.0

Hyland wasn't satisfied with that response. The article still commented on the possibility that she had undergone plastic surgery, and hugely focused on her physical appearance.

Then Sarah posted this sassy photo.

Sarah sarcastically quipped, "Got some work done tonight. Going for a new look... gonna write about this now?" while wearing a facial mask and glasses.

She continued her clap back with videos pointed towards the offensive article. "I'd like to say that for those who think I'm, like, hurt or sad by this article...uh uh." And then, "The only thing is... [if] you come for me, I come for you." Daaaamn girl!

Next Sarah did a beautiful Donald Trump impression.

The woman should be allowed to defend herself. We're pretty sure she's imitating Trump for both parts of this conversation. Not completely sure. We'll allow it.

Finally, she posted a video of her face with zero makeup.

That's pretty revolutionary in this day and age. She said, "I'm sorry I've been a little bit salty... the comedy was there and I had to take it."

People on Twitter were pretty supportive of Hyland after she defended herself.

Twitter user Don Long makes a good point. If someone wants to use plastic surgery, good for them. That's their personal business! People change over time and it's not in good taste to blast someone for their personal appearance in any circumstance.

We don't think anyone will be coming for Sarah Hyland anytime soon.

The woman can defend herself. This isn't the first time Hyland has spoken out about her body appearance. People were attacking her for appearing "too skinny" earlier this year, prompting her to release this emotional letter about the issues she'd been dealing with.