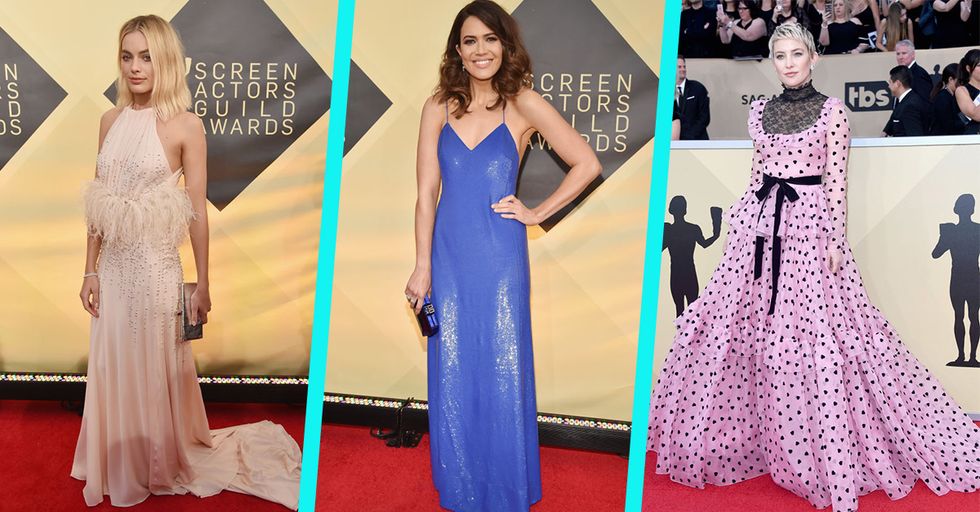 The SAG Awards red carpet is underway and within moments, it became clear that the all-black dress mandate from the Golden Globes had been lifted. Celebrities, both male and female, are still certainly talking about Time's Up and #MeToo on the carpet, but it feels as if a bit of the weighty somberness has been lifted.

The question remains: can we talk about stopping harassment and assault while still wearing color? These celebs seem to think so...

This tiered, polka dot pink number is essentially the opposite of black. And we're not mad about it!

Mandy is absolutely slaying in this shimmery, slinky blue gown. She's nominated for This is Us tonight and we would love to see her win!

Margot's fluffy, pink, confectionary get up is almost other-worldly.

This is the Year of Sunita. With killer roles in both Netflix's Glow and USA's Mr. Robot, she is the nominee we want to see go home with an award the most!

Olivia's glittery, strapless gown is the stuff dreams are made of! Or is that just our dreams? You tell us!

The Lady Bird star is stunning in pink.

Lupita is stunning in this silvery sequin-and-feather number.

We can't get enough of Gina. She makes us laugh and cry as Jane on Jane the Virgin and we are psyched to see her come to the big screen in this year's upcoming film, Annihilation.

Brie's floral gown is both sweet and sassy, just like her! We love to see her supported by musician husband, Alex Greenwald.

The impossibly talented, beautiful, and brilliant Greta Gerwig is killing the carpet tonight in this yellow and black number. We think she deserves every award for Lady Bird.

Mary's turn as Florence in Mudbound has earned her her fair share of awards buzz. Will she win tonight? Only time will tell!

Natalia is amazing as the sweet-but-strong Nancy Wheeler in Stranger Things.

Orange in the New Black's "Crazy Eyes" looks waaaaay different on the red carpet and we are loving it. You go, Uzo!

The elder Fanning sister is demure and darling tonight in the clear color of the night: baby pink.

Danielle plays Tasha 'Taystee' Jefferson on Netflix's hit Orange is the New Black, but tonight, it looks like glam might actually be the new black!

Connie Britton seems to have also gotten the pink memo! Tell us what you think of these gowns in the comments!
20%

$39.99 $31.99
Buy Now
See More Deals
We hope you find these deals as awesome as we do! Just an FYI: we may receive a share of sales from links on this page