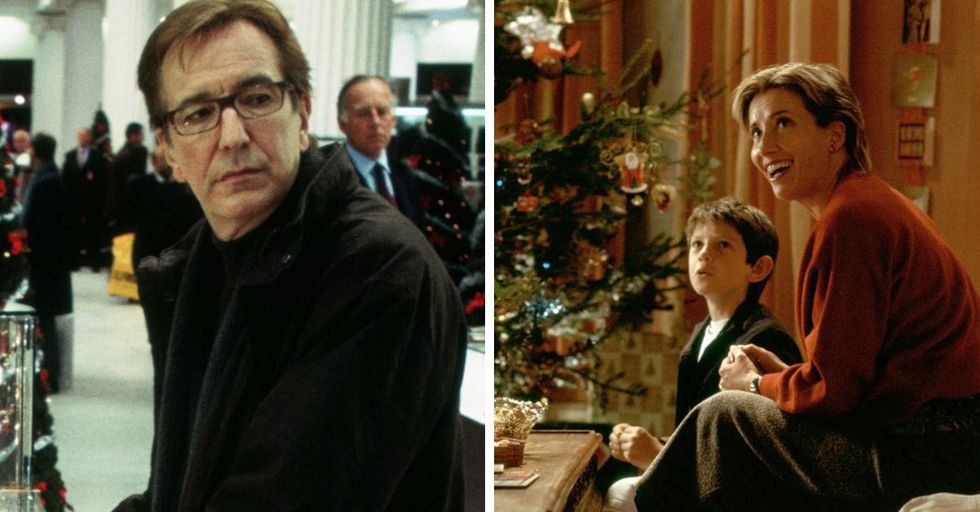 The seasons are changing, there's a chill in the air and, what's that? Do you have visions of Hugh Grant dancing in your head? That's right, the holiday season is upon us– which means it's time to watch the best Christmas-themed romantic comedy ever to exist, Love Actually.

But despite any criticism, this movie is still amazing. And who cares if it's slightly flawed? It makes us feel good to watch it! Love, heartbreak, and a charming prime minister. Love Actually has it all.

Here are some behind-the-scenes facts you may not have known about the Christmas movie we all love. (Admit it, critics, you still love it.)

Hugh Grant did not want to dance.

Who doesn't love the scene where Hugh Grant dances around 10 Downing Street? Well, apparently, Hugh Grant. He put off having to do the scene until the last minute because he wasn't thrilled by the idea of dancing around the set by himself in front of everyone. (Yes, it was a set. They wouldn't let the crew film inside the actual 10 Downing Street.)

According to one of the creators, Rowan Atkinson's character purposely wrapped the gift slowly so Alan Rickman's character would rethink his affair.

Originally Rowan's character over-wrapped the gift on purpose to stop Alan rickman being able to buy the necklace. Because he was an angel.
— emma freud 💙 🔴 (@emma freud 💙 🔴)1449987702.0

What a true holiday hero.

That's this guy, in case you forgot:

Originally, Atkinson's character was meant to be an angel.

They even toyed with the idea of him fading away after wrapping the gift. However, it was decided that in a movie with nine romantic plots, adding a supernatural element was maybe a bit much.

There are nine love stories in Love Actually, but originally there were even more.

Several storylines were filmed but got cut before the movie was finalized.

And an African couple supporting each other through famine.

The creators have confirmed that Alan Rickman's character did have an affair.

HOW COULD YOU DO THAT TO EMMA?

Kris Marshall's character goes to America in search of love and meets three American girls in a bar. The scenes with those actresses were improvised!

Lincoln thought he had good enough handwriting to write the giant cards he holds up to tell Keira Knightley's character he's in love with her (creepy or not creepy, you decide). Apparently, the prop department didn't totally trust him, though, because he had to trace the letters onto the cards.

The cards were inspired by Bob Dylan.

They are similar to cards used in his video for "Subterranean Homesick Blues."

Richard Curtis ran the cue-card scene by all the women in his office to make sure it wasn't too mushy.

But apparently, he didn't ask them if it was creepy.

Love Actually wasn't supposed to be a Christmas movie.

Even though many of us watch it every year and it's incredibly Christmas oriented, the movie wasn't originally going to be centered on the holiday. But the creator really loved Christmas movies and had the idea to set it at Christmastime. He says he's still shocked it's become a classic holiday film.

Both Claudia Schiffer and Laura Linney were cast because their parts were written for someone who looked like them but wasn't them.

Richard Curtis, the writer, and producer, wrote both parts for "Claudia Schiffer-type" and "Laura Linney-type" actresses. When he couldn't find the perfect actresses, he ended up offering the parts to the actual actresses.

Claudia Schiffer was only in the movie for 60 seconds, but made a ton of money.

Schiffer plays a fellow parent that Liam Neeson's character develops a crush on. Her cameo reportedly earned her over $200K.

Thomas Brodie-Sangstar was thirteen at the time of filming.

He also happens to be related to Hugh Grant.

They are second cousins. Isn't that weird?

Olivia Olson was such a good singer, they had to edit her song to make her sound worse.

The girl who played Sam's crush, Olivia Olson, actually sang her famous Mariah Carey solo. But there was one problem: it was too good. The director worried she sounded too much like they'd dubbed an adult over a kid singing so they added in some breaths to make her song sound less polished in post-production.

Apparently the film agrees that Lincoln's obsession with Knightley is creepy because they put in a very specific prop.

When Keira Knightley's character comes to Lincoln's film studio, a copy of Hitchcock's Rear Window is displayed. Rear Window is a movie about a man who watches his neighbors from afar.

Originally, the Colin Firth character and the Hugh Grant characters' storylines were going to be their own movies.

Both got scrapped and combined into one film.

Olivia Olson and Thomas Brodie-Sangstar both starred as voices in the cartoon Phineas and Ferb.

But the two never saw each other on set because they recorded from their separate countries.

There is surprisingly a lot of body shaming in this movie. Emma Thompson talks badly about her body (which turns out isn't her own body), and they spend a lot of time talking about how big Natalie is.

And that scene took seven takes, so she cried a lot.

Emma Thompson said she drew on real life for that scene.

Her ex-husband, Kenneth Branagh had an alleged affair with Helena Bonham Carter.

One scene is a cut scene from the movie Four Weddings and a Funeral.

When Colin insults the caterer's food. This was originally written for Grant's character in Four Weddings.

Kris Marshall, who played Colin, returned his paycheck for the day he filmed with the three American girls.

He said he had too much fun getting undressed by three women to get paid for it.

Curtis said he was inspired by people returning from trips in airports to write the movie.

They set up hidden cameras to capture reunions.

And then quickly ran up to people to get them to sign for permission to use them in the movie.

The lake that Jamie and Aurelia jump into to save his writing pages was only 18 inches deep.

They had to do the scene on their knees so it looked deeper.

Also there was a 45 minute long meeting to decide what underwear Aurelia would wear.

Apparently, there were 20 options. Really, 45 minutes?

This movie, despite it's weird flaws, is still really good.

Cozy up on the couch and treat yourself to some Love Actually this December.