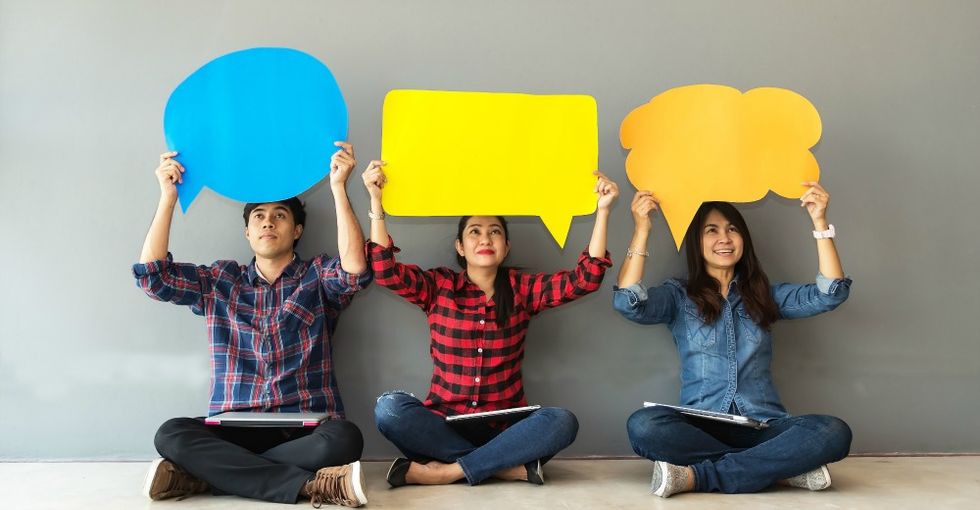 Actually Brilliant Advice That Seems Useless Until You Try It

We all like to think we've got it all figured out. In fact, most people love nothing more than to give others unsolicited advice that, let's face it, is pretty much always terrible. I once had a co-worker tell me that bleach was an effective cure for poison ivy and that I looked really good in lime green. She was totally wrong about both and caused me to blow 80 bucks on a hideous fluorescent green sweater. Luckily, I never tried the bleach method, since poison ivy isn't very common where I live. Case in point, some people just shouldn't give advice.

The following 30 people reveal the one piece of advice that they completely dismissed at first but then, after trying it, realized how brilliant it was. Keep scrolling to hear some helpful life tips. And no, none of them involve using bleach as a topical skin care solution.

"Clean as you cook, dishes right away, and 10 minutes every day walking through the house picking things up/organizing."

"So much better than hours of cleaning on one day."-Olive767

"Just saying 'thank you' any time someone does something."

"Everyone likes to be acknowledged for something, even if it's something small, and just making other people a little happier makes you happier.

And I imagine even just noticing how much others do for you is bound to help."-klop422

"Flip a coin and choose the one you're hoping for."

"I don't even have to flip a coin now and I'm way more decisive!"-eventstranspired

"Try killing roaches with soapy water in a spray bottle."

"It sounds useless, but it works better than any insecticide I’ve ever tried, and it’s non-toxic and really easy to clean up."-MinimalistFan

"If you feel like you can’t survive a week, focus on getting through one day."

"Your gums bleed when you floss because you don't floss enough."

"Turns out if you floss enough, your gums won't be inflamed so they don't bleed when you floss."-smityhasnwrth43

"Stick to the same sleep schedule on your days off that you follow on days when you have to be somewhere at a specific time (like school or work days)."

"I spent my whole life sleeping until noon on weekends, thinking I was storing sleep in some imaginary sleep bank. I recently started waking up early on weekends, and now I don't have trouble waking up when my alarm goes off during the week.

Plus I have all this extra time to do stuff because I'm not sleeping all day."-sparrow_one

"Putting cold water on freshly shaved skin will make it so you don't get ingrown hairs."

"Some of the best advice I've ever received."-VHStape89

"My dad always told me, 'Ask anyway. The worst they can say is no’ when buying something or when I needed something from another person."

"Seemed stupid to ask if I was sure they would say no but I was also a socially anxious kid. Turns out that advice has helped me with school, with raises, and with people in general."-astrocanyounaut

"This too shall pass."

"On those days when I just feel like I can't take it I think of that, and I know tomorrow will be different. Someone once told me, 'Tomorrow may not be better, but at least it'll be different.' In a strange way that too is comforting."-rakmode

"Keeping my shoulders back."

"It was a suggestion I saw for preventing panic/anxiety. I don't know what it is, but when your shoulders are in that position it gives some strange feeling of control. I also read somewhere that during panic attacks the body basically wants to curl into the fetal position for protection, so I feel like focusing on keeping your arms down and shoulders back is a conscious way to go against that and stay grounded in reality."-coralclouds

"My Dad says this all the time, and I never thought of it as useless...I just never used it.

Now I have, and my money is far easier to manage."-Ekscalliber

"If you can tell that someone is going to hit you, tilt your head down."

"Teeth don't grow back. Your jaw is lights out. If they punch the top of your skull, they will probably break their hand."-Alcoholitron

"In other words, worrying about all the stuff that could happen stops you from doing things and worse, turns potential pain into actual worry and mental pain."-0nlyhalfjewish

"Cleaning your house before leaving for more than 5 days."

"Nothing is better than coming to a clean house."-Saturnwithasunroof

"Once begun is half done."

"I am a terrible procrastinator by nature. I have totally done the 'Well, now it's 5:02 so I have to wait until 6:00 to start cleanin' and I like making things seem like so much work that I can't possibly do them unless I take time off of work.

In reality, if you just start a project without thinking about it you can get everything done in like fifteen minutes a day and it's never really that bad."-stabatha_christie

"Not taking your cellphone into bed with you."

"After a while, you will sleep much easier without the distraction and blue light shining straight into your eyes before bed."-Mr_Impossibro

"Bribe yourself with fun things to do the not so fun things."

"Today I was tired after work but got a little care package in the mail, so I made myself go on the 2.5-mile run I didn't want to do before I could open the package.

Now I'm refreshed and happy that I did the thing I was dreading, and I have a fun care package to open."-millre01

"If you feel like quitting then just tell yourself that the story doesn't end this way."

"Sounds cliche, but you decide when your story ends when you stop trying. You may fail, but you will not fail today. Don't let the story end this way."-PeytonBrees

"Exercising helps with depression and anxiety."

"It's not a cure-all and I needed to be on meds to get to the point where I could do it, but it really does help me. I've been off my meds now for over a year (under a doctor's supervision) and when I can't exercise for a few days, I can feel the depression and anxiety coming back. Now instead of going through a million things I did wrong in my head, I run for 3 miles or lift some heavy shit."-AlarmingBird

"When you're texting/emailing between colleagues, friends, etc. don't put anything you wouldn't say to their face in writing."

"If you have it in writing they've got something physical they can hold against you or gossip about."-Ephemeral_Halcyon

"I had a problem looking at people’s shoulders while they were speaking instead of their face."

"I'm a guy. I'm emotionally stable, so I thought it was a pointless idea. Went with my ex-girlfriend in order to work out problems in our relationship.

I learned so much about myself and got some amazing life advice."-YepThatLooksInfected

"My mom told me to spend good money on the things that separate you from the ground: tires, shoes, mattresses."

"I finally bought good not cheap shoes and life was SIGNIFICANTLY better. They last so much longer and my back and posture improved too. She’s not wrong about tires and a mattress either."-KalePanic-

"Most times now they notice me as an individual, not as someone begging for a girlfriend."-chu100

"My therapist told me the next time I'm going to have a panic attack to just give in and tell myself it was ok to have one."

"I told him he was crazy. After a couple tries it started working, to my amazement. I haven't had a panic attack in 3 years."-Donkey0394

"If you have body image issues, find even one very small thing you like about yourself."

"My starting point was a freckle in the middle of my left hand. Whenever you’re feeling bad about yourself, remember you like that ONE thing. Find a new small thing to like about once a month if you can. It becomes easier to find things, and eventually easier to like yourself, in my experience. Thanks for that advice, Mom."-selbrat

"I saw a video of a Navy Commander talk about why making your bed as soon as you get out of it is so important."

"The first thing you do when you wake up is stand up and get out of bed. If you make the bed, you have accomplished a task. You have succeeded.

The first thing you did today was succeed at a task. Take that with you and use that success to fuel everything else you have to do for the rest of the day.