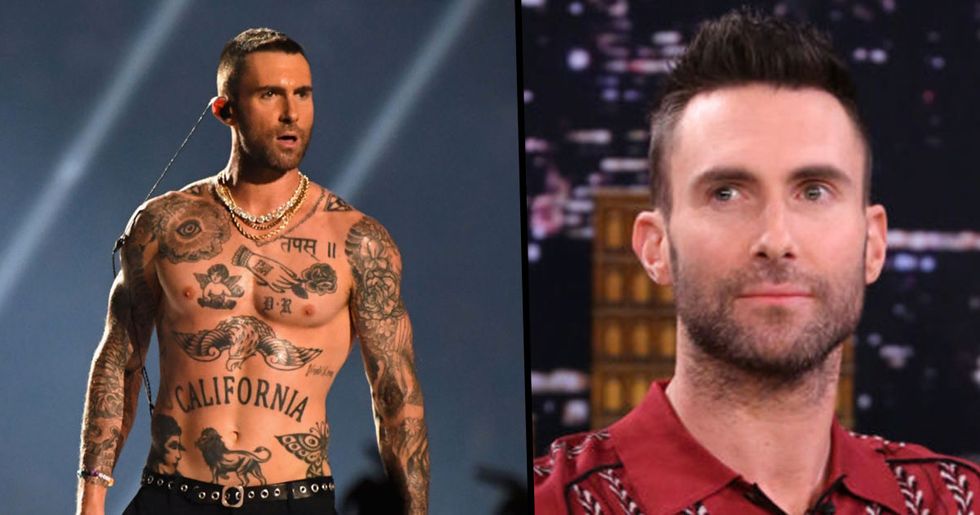 Adam Levine Responds To Brutal Criticism Of Half Time Show

This year, though, things went a little differently. Amid controversy surrounding the effective blackballing of Colin Kaepernick amid his Black Lives Matter protest, many artists turned down the half time show opportunity in solidarity with Kaepernick – with the literal goddess, Rihanna reported being among them.

And the controversy didn't stop there. The half time show was performed by Maroon 5, and let's just say there wasn't an enthusiastic reception. Amid the online savagery, lead singer Adam Levine has spoken out.

For those who missed it, the 53rd Super Bowl happened on Sunday.

The NFL game between the Los Angeles Rams and the New England Patriots ended with a score of 3 to 13 in the Patriots' favor.

As ever, it was one of the most watched television events of the year.

Just over 100 million viewers tuned in, according to CBS – although this is actually a dip in ratings when compared to previous years.

Alongside the football, there's another big attraction.

The Super Bowl half time show is what elevates it from championship football game to massive cultural event.

Many of the biggest pop acts have performed in this slot.

Including Prince, Lady Gaga, Beyoncé, Bruno Mars, and Katy Perry. Katy Perry's 2015 half time performance is thought the be the most watched musical event of all time.

This year's pick was a little bit controversial, though.

Because of issues with the NFL and their policy on race, many of the biggest artists of the year turned down the spot. In the end, the performers chosen for the show were the prolific pop-rock artists, Maroon 5.

The LA based band formed in 1994, giving them a significant amount of history.

They've had a long and lucrative career, with big hits including This Love, Moves Like Jagger and She Will Be Loved.  Lead singer Adam Levine has also been a judge on The Voice.

The band headlined the Super Bowl LIII half time show this year.

Many thought the show was doomed to failure from the start, with artists including Jay Z and Cardi B reportedly turning down the gig. Colin Kaepernick's lawyer compared Maroon 5's decision to perform to strikebreaking, saying it was a cop-out.

The band were joined by rap artists Big Boi, and Kylie Jenner's beau, Travis Scott. But even additional help from some super hot artists couldn't save the performance.

Because critical reception of the performance was pretty rough.

The vast majority of the viewing public, alongside television and music critics, said the show was lackluster, dull, boring, uninspired and forgettable.

In combination with the controversy of accepting the offer to perform, it's all pretty disastrous.

The apolitical nature of a performance already criticized for being bland and not standing for anything rendered it one of the least popular half time shows of all time.

The decision to go with Maroon 5 was questioned.

They're a prolific rock band, sure, but are they on the same level of global super-stardom as other past acts?

Some found aspects of the performance pretty awkward.

Tell me this isn't Adam Levine dancing next to Travis Scott for the halftime show https://t.co/ROh5BEAc7q
— Madison Yeash (@Madison Yeash)1549248573.0

There's nothing worse than tuning in to see what should be a spectacular performance, and just wanting to cringe instead.

Even some celebs got in on the critique.

It's true that his brown, '70s-style sweater vest bore a striking resemblance to a surprising number of viewers' home furnishings.

Although, things took a different turn.

The Patriots winning another Super Bowl after Adam Levine took his shirt off is the worst thing to happen to the ci… https://t.co/LXZ1enUEl2
— sreekar (@sreekar)1549250117.0

Levine removed his shirt, perhaps anticipating the at-home dislike of the brown circular pattern. But that didn't help things, either.

Some compared the gratuitous shirtlessness to this scene from The Office.

It did seem a little like Levine was grasping at anything to make the lackluster performance a little bit more interesting.

Although Levine's toplessness got people speaking about a bigger issue

In 2004, Janet Jackson's breast was exposed on stage during the Super Bowl half time show, which caused a national uproar. Jackson's career never fully recovered from the incident. Levine's nipples, however, seem to be good clean family fun.

Regardless of superficial complaints, though, the half time show has been panned.

Hands down the worst halftime show I’ve ever seen from a #SuperBowl. Everything rushed, too many artists, no defina… https://t.co/pULdHvOws0
— Jordan Schultz (@Jordan Schultz)1549243278.0

Many felt it was rough around the edges, seemed rushed and under-rehearsed, and was unenthusiastic and just plain dull.

The tedious showing may go down in history as one of the least popular ever.

Although, others have pointed out that there are past half time shows which have been similarly poorly received, noting Justin Timberlake in 2018, and the Red Hot Chili Peppers in 2014.

Some pointed out an upside to the Maroon 5 performance.

It was nice to see all of America finally come together as one to tell Maroon 5 they sucked.
— Shawn Chatfield (@Shawn Chatfield)1549331904.0

In a country (and, indeed, a world) which often seem completely divided, it's good to see we can all be brought together to agree on something.

Some have said the criticism of the half time show was part of a greater issue.

The actual Super Bowl game has been described as one of the most boring of all time, with record-breakingly low scores and an obvious win for the favourites. In the midst of this, it's likely people weren't really in the mood to jam out to Maroon 5.

Others have bravely stood in support of Levine's decision to go shirtless.

Many have said they enjoyed staring at his tatted bod. The criticism over what's now being referred to as "nipple-gate" is also thought to be problematic by some. If nipples aren't a big deal, then how come we're talking about Levine's so much?

Others have said Maroon 5 was in a no-win situation.

The controversy surrounding their performance, plus the low-scoring and tedious football game provided a perfect storm in which Maroon 5 could only bomb.

On Monday, Levine made the decision to speak out.

In an emotional Instagram post, he responded to the harsh critiques he and his band have faced in the wake of the Super Bowl.

In it, he thanked the universe for the "historic opportunity."

He also got a little sassy with the haters.

Levine thanked "our critics" for "always pushing us to do better."

Fans pointed out something else about the performance.

Far from "crossing the picket line," Maroon 5 was actually being charitable activists by choosing to accept the offer of performing in the Super Bowl half time show.

Although, we're still not convinced the shirt removal was totally necessary.

Super Bowl viewers have made some unfavorable comparisons between Levine and a Chipotle bag. But, as Levine himself has said, "Forgive Laugh Cry Smile Share" ... et cetera.

In all seriousness, though, maybe it's time to leave Maroon 5 alone.

There are far worse crimes being committed than a slightly crappy half time performance at the Super Bowl, after all.

Plus, it leaves next year's show with an easy act to follow!

In all seriousness, it takes a brave person to be this dignified in the face of international mockery. So for that, we have to say, well played.