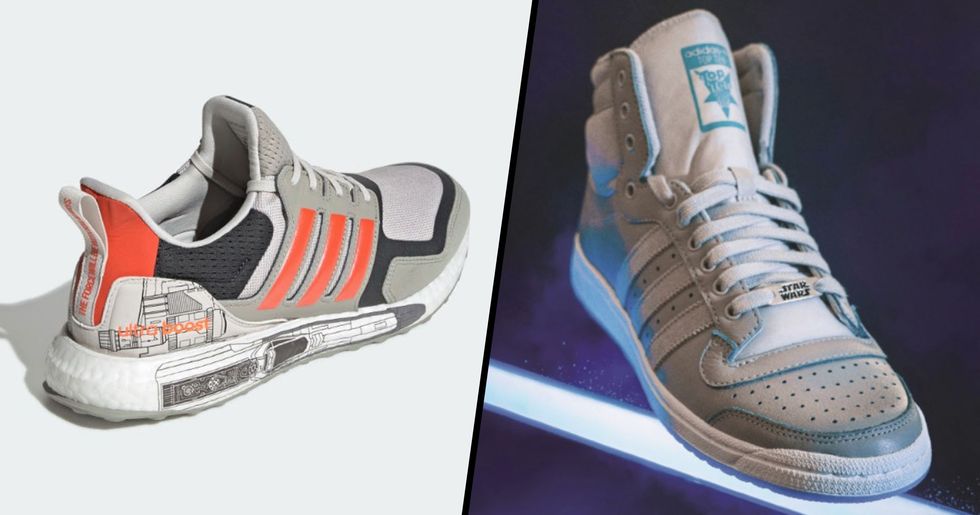 Adidas has announced an exciting collaboration with Star Wars.

In an unexpected collab, the reveal of these sneakers has certainly unruffled a few feathers.

You know, frankly, I actually think these sneakers look pretty cool, and for someone with no interest in Star Wars, that's kind of a big deal.

Keep scrolling to see the collection that's got everybody talking...

Adidas has a lot of street cred, right?

Which is why it surprised people to find out that Adidas has decided to collab with the notoriously nerdy Star Wars brand.

It's true that Star Wars is a franchise that has had a huge array of merch created... but it's still a surprise to hear sports-wear brand Adidas wanted to team up.

That is I guess how a lot of people have been viewing the Adidas and Star Wars collab.

But the Star Wars fanbase is much bigger than you might think...

Even sporty, hip and trendy people, like Ellen Page, are fans of the franchise.

And I know right? The design is pretty subtle and cool.

By that do they mean the tradition of Star Wars merch being lame?

It's a winning look.

It's no surprise Adidas were so excited to launch this latest collab.

Adidas and Star Wars seem to go together as well as ham and cheese, peanut butter and jelly, (all great sandwich filling pairs.)

"Show off your love of Star Wars™ every time you step on the court."

Adidas are encouraging their buyers to take their love of Star Wars onto the basketball court.

Everyone likes to feel like they belong, and those sporty Star Wars fans now have been acknowledged.

It's the sneakers that have really got people excited...

According to this Twitter user, this basketball sneaker design collab is fire.

Don't worry these sneakers are for everyone...

@starwarstuff @starwars @adidas Are these for children because I really don’t wanna look like a fool in these but they’re so nice 😭
— Nick cook (@Nick cook)1572556036.0

They are available in both children and adult sizes.

Well, everyone except women...

Sadly for female Star Wars fans, the collab has only extended to Adidas' male line. But I mean, if like me you don't mind if a product is labeled "Men's," and you're happy to wear it anyway then you can go right ahead and wear the Adidas/ Star Wars collection.

Whilst having Star Wars vibes...

The sneakers don't overkill on the Stars Wars trademark and look pretty cool. These bad boys will set you back between $150-200.

These are my personal favorite:

This particular pair, according to the Adidas website, is "paying homage to the famed franchise with Death Star detailing and iconic quotes displayed on the heel tab."

So these ones are a little extra special...

In true lightsaber fashion, these sneakers have UV midsoles, meaning the glow in the dark. Wicked.

The high-tops are supposedly inspired by Obi-Wan Kenobi, which makes sense considering the color choices. The Star Wars badge on the tongue was inserted, according to Adidas because it "reminds you to feel the force."

Not everyone is a fan...

I mean hey, you're never going to be able to please everybody.

There's plenty of people already snapping these up.

I wouldn't be surprised if this is a highly successful collab for Adidas.

Just in time for Christmas...

If you have a special someone in your life who is the ultimate Star Wars fan then you may well want to consider getting them a pair of these Adidas sneakers. Or maybe you could take them to Disney World... continue scrolling to read how Disney World has almost finished its breathtaking Star Wars land.