Admit It: You Did Every Single One of These Things as a Child | 22 Words 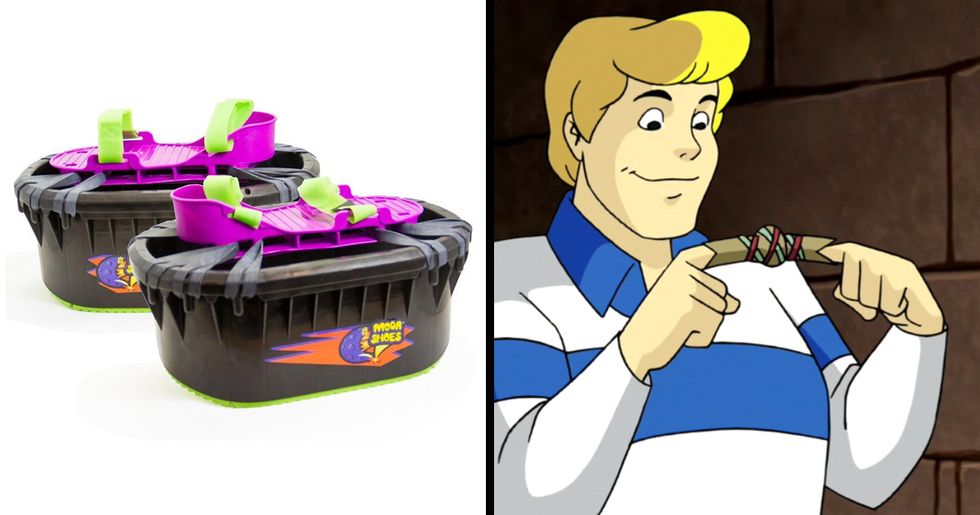 Admit It: You Did Every Single One of These Things as a Child

Obviously, we don't all have the same childhood memories; each and every one of ours is special. While I do have more siblings than the average person 40fact), I'm pretty sure I would have noticed if every single person I met was also my sibling.

However, even though you and I grew up in different households, I can guarantee that — assuming we're of a similar age — I know what you did as a child. I know because I did the exact same things. I am pretty sure that every kid who grew up in the '90s did the following 30 things. If you didn't, my theory could be completely wrong. Or, maybe you're the weird outlier that somehow proves the theory. Look, I'm not a scientist.

Scroll through this gallery and keep a mental checklist of the things that you relate to. I bet you'll be surprised once you get to the end.

1. Drew your sun in the corner.

Why, though? We all know that the sun is round! Bonus points if you also drew sunglasses on it.

2. Unzipped your pant legs and wore them around your ankles.

Zip-off pants were basically the coolest kinds of pants. They were followed closely by the pants that snapped up the sides, though!

3. Played with these weird string toys.

It wasn't fun, exactly, but you couldn't pick one of these things up without pressing the bottom on the button. That's kid law, baby.

In this case, the white tiles are obviously lava. Unless you accidentally touch one of those tiles. Then that one tile is safe.

...And waited for it to try so you could peel it off. Man, kids are weird.

Even if you never actually played with them. It was more about the quantity. I still remember getting a set of space pogs from Pizza Hut and thinking I'd won the dang lottery.

7. Walked on the seats of restaurant booths.

Bonus points if it was in a Taco Bell that was decorated like this one. Why did they ever change Taco Bell interiors? This still looks awesome!

8. Watched this screensaver for way too long.

Also the maze one! I bet you also pretended you were driving a spaceship in warp speed with the "stars" screensaver.

9. Ate the candies off a Cosmic Brownie.

As far as I'm concerned, the best part of being an adult is being able to buy a Cosmic Brownie or Zebra Cake whenever you want to. And still eating the candies first.

10. Rocked out to your HitClips.

Kids these days will never understand how exciting it was to enjoy a 30-second clip of a popular song whenever you wanted to. (We sure were easy to please, eh?)

11. Also rocked out to the Zoom theme song.

My personal favorite part was at the end of the episode when they said the address where you could send your ideas. "Zee double-oh Em Box Three Five Oh. Boston, Mass! Oh, Two One, Three Four! Send it to ZOOM!"

I definitely remember flipping out when matte fruit snacks first came on the scene. They were basically magic.

13. Smacked yourself in the forehead with one of these jump ropes.

You also probably spent what felt like hours trying to untangle them. They were always tying themselves up in knots!

I imagine the creator behind this toy was interested in creating a generation of people with very weak ankles. That's the only way Moon Shoes make sense.

15. Smacked your ankle with a Skip-It.

Wait a second. Was everyone trying to break our ankles? Why were so many toys out to get us? Remember when that girl got her hair eaten off by a Cabbage Patch doll?! It's a wonder we made it to adulthood.

16. Balanced one of these birds on your fingertip.

And felt like a total genius when you did it. (You weren't, though. Literally everyone could do that.)

16. Freaked out for a second after getting stuck in a finger trap.

I think these were the first practical lesson I ever had in problem-solving. I was definitely contemplating the merits of cutting my fingers off before I learned the trick to escaping them.

18. Ran your finger along the grooves of a brick wall.

Why? Just because. You were a kid! What else were you supposed to do?

19. Crossed your fingers when renting a video game...

...And hoping the empty box had a Blockbuster box behind it. Also, renting Starfox 64 multiple times because DANG IT, you were going to finally beat it this time!

20. Thought long and hard about your computer avatar.

And feeling so special that you got to have your very own desktop wallpaper and screensaver. You were basically an adult.

20. Celebrated when you got one of these pencils...

...For about five minutes, until you inevitably lost one of the cartridges, which rendered the whole thing completely useless. Why did they give us these pencils? Were we supposed to learn a lesson or something?

22. Bit into one of these bouncy balls.

Even now, decades later, I remember the weird, grainy texture. And the smell!

23. Tore your mouth up on these babies:

Who knew tiny shards of mango-flavored glass could be so addictive?

24. Pretended to give yourself a shot with your pencil.

You fooled literally no one. But that didn't stop you!

25. Played God with your solar-powered calculator.

I remember one day in 3rd grade when the power went out just as we were trying to use these calculators. It was a good day.

...And feeling the static on your skin. Is it weird that I remember what TVs like this used to smell like? Someone back me up in the comments.

27. Chewed on these foam dics:

I promise I didn't go around chewing on everything as a kid. Just most things.

28. Scared yourself reading these books:

You still think about The Big Toe story every once in a while, don't you? Me too, friend. Me too.

It was banned in our school because the grownups thought it was a gang sign. It wasn't, though. We were just weird kids, being weird.

Yep. I'm guilty! So, how'd I do? Let me know how many things I got right in the comments! And don't forget to share this with someone else who grew up in the '90s.