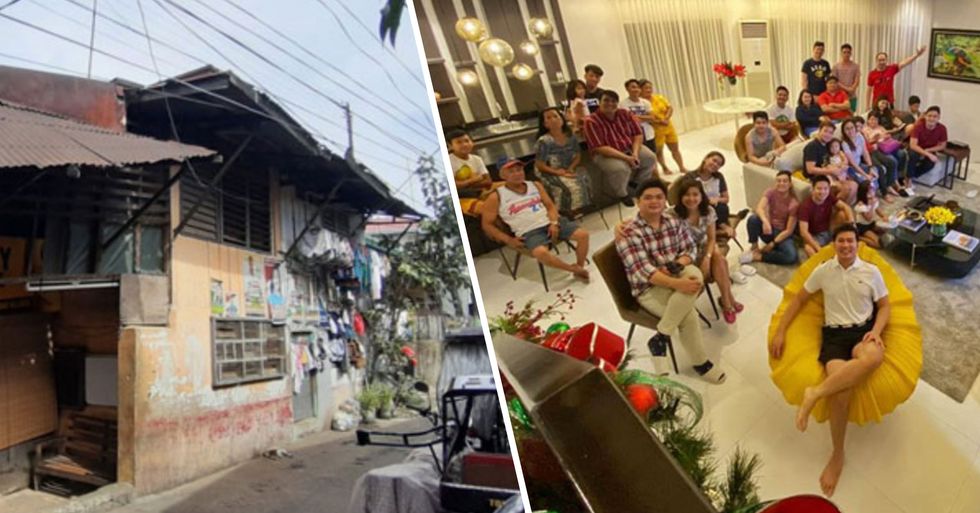 They say 'do good things for others and good things will come back to you', which is exactly what one couple found.

Despite not having much themselves, one couple adopted a little boy and gave him everything that they could.

Now grown up, their son has a successful career and is in a position to give back to them and provide them with a better life.

They say parents put their children first, regardless.

And it was no different for this couple from the Philippines.

Despite not having lots of money, they had enough to make a change to one little boy's life.

Nanay and Tatay adopted Jayvee Lazaro Badile II when he was a little boy and gave him everything that they were able to.

Life wasn't easy for the family.

With Nanay working as a vendor and Tatay a porter, money was tight.

But they tried their best.

And from that Jayvee was able to develop his career.

Now Jayvee is now grown up with his own earnings.

In fact, he has become a successful young man.

And whilst he grew to his success, he made a promise.

Jayvee vowed that he would provide a better life for the Nanay and Tatay.

And despite being a successful young man he has never forgotten this.

So once he was in a position to, he made dreams come true for his adoptive parents.

"When Nanay and Tatay adopted me, it wasn’t a good life. Nanay is a vendor, Tatay is a porter."

"Now that I have the chance to give back to them, I will make sure they will live their dreams better than what they could ever imagine."

And he did just that.

Jayvee built them a luxurious mansion.

The house spans 3 floors and includes 7 bedrooms and 4 bathrooms.

It has pretty much everything you could want there.

And is the perfect space for his family to live.

A completely different house to the one in which he grew up in.

In the post, he spoke of the house that he grew up in saying:

"Twenty-eight. This is the number of people I was able to open and live with my whole family in a little barong barong in bocaue, bulacan. Let's hire this for a thousand a month."

"Often, flooding the exact inside of our house, often we don't have our own water supply. Brought by poverty, we often hit the electric power."

"Nine members of my family are experiencing cramped, dirt and heat, and lack of sleep and eating. There is no good bath, no self and good toilet."

"Our home is a picture of poverty, picture of the family who strive to achieve the dream."

He also adds, "I can do all things through Christ who strengthens me. And finally, thru hardwork, grit and faith, I have provided a bigger home for my parents and my whole family."

But this isn't the only thing that Jayvee has done for his adoptive parents.

He also takes them on trips around the world.

Having previously visited the likes of Sydney.

He is in the position to show them places that they may have never dreamt of being able to see.

But one of the most important things that he does.

And it's something that money can't buy.

He spends as much time with them as possible.

Having just spent Christmas with his loved ones.

Despite Jayvee's growing success, he hasn't forgotten his previous struggles.

It's heartwarming to see him repaying those who mean the most to him.