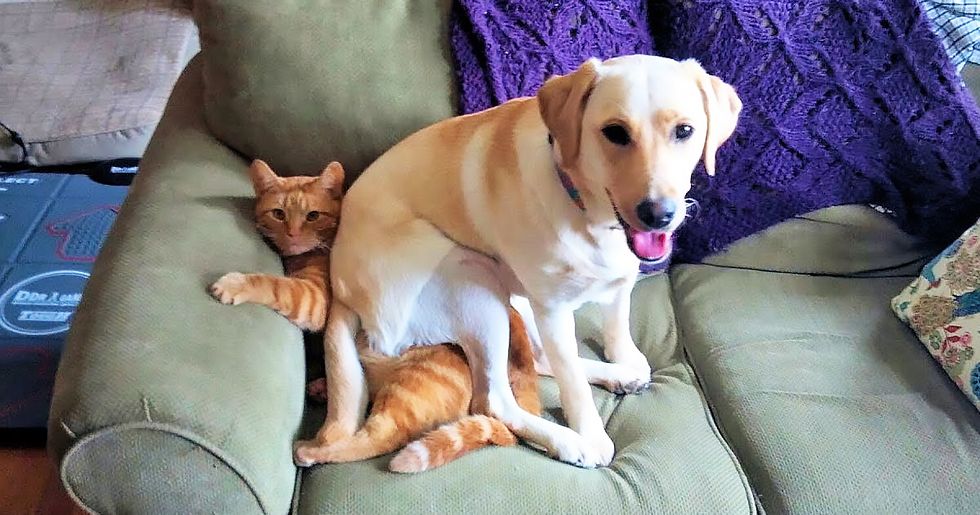 You hear that sometimes pets can take on the personality of their owners, and we know, without a shadow of a doubt, that some people — maybe even a lot of people — are complete and total jerks. It doesn't take a huge leap of logic then to assume that some animals too can be jerks, provided that they're taken in by jerks and raised to see that jerk-like behavior is a way to get what they want.

But it's hard to imagine, isn't it? When we think of cute animals, we think of them snuggling up to us, purring in our laps or faithfully retrieving thrown sticks. And yet, here we are, about to dive into a collection of pictures and gifs of animals behaving not like furry little sweethearts but instead acting selfish, dismissive, and downright mean.

Check out these animals, all of which are adorable and cuddly, going into business for themselves and acting like wild, out-of-control, jerks.

Do not be surprised if NBA teams looking to create more turnovers begin recruiting this cat. (Portland Trailblazers, I'm looking at you.)

Must be protesting something.

Why is this cat just okay being here? Don't they know people are trying to get a seat on the subway? What a jerk.

Wait-- is that-- is that Winston's music?! He's looking for a sot at the title!

According to the post's headline, Winston here loves the new foster kitty. It looks like this cat is looking to pin the other cat for the World Heavyweight Championship.

Normally, this is very cute, but not tonight, jerk.

Head-bump loving cats are the WORST when they have the cone of shame! - Siyfion

Yo, this cat is not taking any attitude from any dog, and they don't care how big they are or how much barking they threaten to do.

The rainbow roll is their favorite.

Why does this cat take the boy's gymnastic abilities so personally?

Was this cat set to compete at the Olympics until a knee injury held them out, and now sees any reminders of their deferred dream as a deliberate attempt to rub their nose in defeat?

"I just came back from an overnight shift at the hospital. I don't need this."

You have to imagine this cat is the kitten's mother, right? And at that point, this is less a gif of an animal being a jerk, and more a gif of a parent who has had themselves a day.

When you find what you love and refuse to give up, you never have to work a day in your life.

No matter your opinion on cats, bananas, or bagels, you have to admire this guy's determination to bite the holy hell out of those bagels, no matter what obstacles get in your way. If you're afraid to ask that pay raise or send out your script, remember this cat and be inspired.

Such a sore winner.

It's one thing to hog the couch from your dog friend, but the way that cat throws a smug gloat at the end? Well, that is just insulting.

Ohh, it's a metaphor.

At first, it looks like the big power player cat is trying to help out the little guy, but the big reveal is that it was trying to help itself, and doesn't even stop to consider how they're hurting said little guy. And so ends my presentation on trickle-down economics.

How does he keep getting away with it?

Didn't want the cat to splash my shorts when I was giving him a bath so I took them off. Found him in the bedroom after. - Birdy1072

When you find a seat you love and refuse to give it up, you never have to be uncomfortable a day in your life.

She has a whole farm where she can sit anywhere, yet she chooses to sit on the cat time and time again. - Lobbyse

You see an opportunity, you take it.

It's reckless. It's mean-spirited. It's positively infuriating. And yet, I'm so glad this cat's passive-aggressive leap onto their owner's work happened, because it's also very, very funny.

Who am I supposed to root for?

It becomes clear that this is a story with no hero — only villains. But look at the punch on that little one!

A lot of "let me speak to your manager" vibes here.

This little guy is just sitting there, chilin' on his fresh mountain, when some skier has the audacity to ruin it? Ohh, you'd better believe they're going to give that rotten skier a piece of their mind.

You ever ask your mom to buy you a new Playstation right when she walks in from work and then immediately apologize because it was clearly not the time to ask? That's this gif. That right here.

What's even worse is, this owner could have saved so much money since the pet store was having a big sale on empty bags of plastic.

Maybe they're worried about their owner's cholesterol?

Five beds and about 10 comfy chairs in this house. So where do you sit? ON THE F*CKING EGGS! - mastercheiftos

Hmm, there's something coming up for me here.

Why does every gif of an animal bugging its mother make me immediately think that the mom is furious about it because she just got home from an overnight shift at the hospital? Is there something in my past that's activating those memories? Should I call my therapist? Anyhow this rhino is bugging his rhino mom even though she just got back from an overnight shift at the hospital.

We fans can only hope the pushed elephant comes back and is able to get his revenge, maybe even in a steel cage.

Sorry for helping, I guess?

The headline: Parrot Trapped On Roof Keeps Telling Fire Crew To "F*ck Off"

This guy is what we'd call a "camper."

That would explain why the birds don’t use this feeder. - iGenie

You shall know only fear.

You know at the end of every horror movie, when the killer is seemingly defeated, only to appear in the doorway for one last scare/ chase sequence? Yeah, that's this. That's this right here. And it's every bit as terrifying.

"SORRY! Game is over, I demand pets." - Hayley_hayys

These dogs refuse to admit Christmas is over.

"I've stands for all I can stands and I can't stands no more!"

Doesn't it just seem like this little dog has been biting this big dog in the same place for years, and this is the time when the big dog had finally had enough?

Oxygen isn’t the only gas in water. - mossberg91

His powers of manipulation are off the charts.

The big dog is the puppet master, the small dog its puppet.