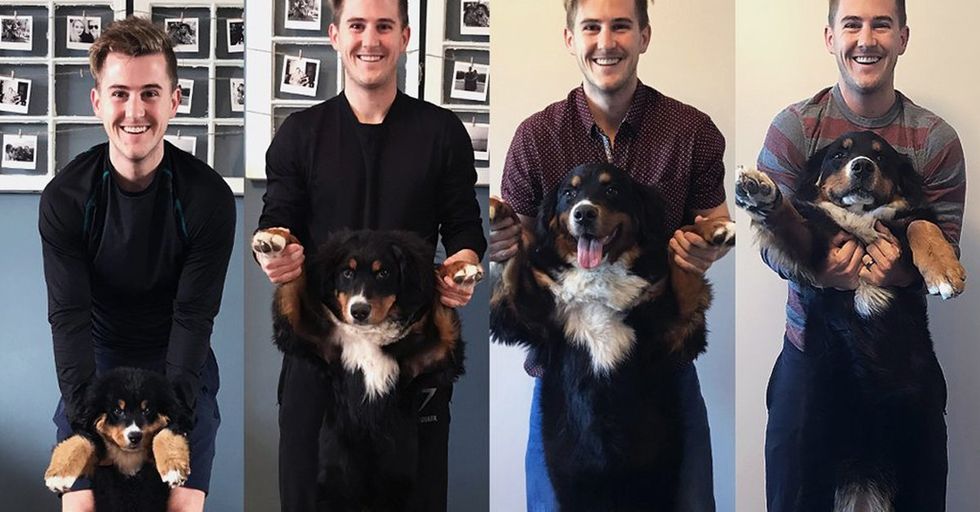 Adorable Before and After Photos of Dogs Growing Up

There is nothing in the world better than a dog who grows old with you. Sure, puppies are cute, but they are total maniacs. Have you ever had an elderly, smushy pup with lots of extra skin lumber over to you and press into you because they love you so much? It is the best feeling in the world.

Pets are so special because they see us through huge events in our lives and are always there by our sides, every step of the way. My pup, Simon, became mine because I moved in with my boyfriend. The dog has seen us move in together and get engaged. He will be there when we get married and hopefully more many years after that as well. Simon is a part of our family. He just happens to be a member of our family who walks on four legs and poops outside on the grass, with like, no shame. The pictures in this gallery show dogs and their owners at a couple different stages of their life. I think you'll be surprised at how quickly some of them grow up!

It doesn't get much cuter than a small child and a dog becoming lifelong best friends.

The dogs in this gallery are so loved and so cute and so fluffy. Like, I don't think you're ready for this fluff.

I speak from experience when I say that Newfoundlands are the best dogs. They are big mush balls and they make great pillows.

Well, this is going to be one enormous dog! At six months, he still probably has a good amount of growing to do.

Something tells me this dog will never be too big to take a nap directly on top of his human. He's in the same exact position in both pictures!

This is too precious. They've been through so much together! This sort of bond is really special.

This St. Bernard went from lap puppy to the biggest dog I have ever seen in my entire life. Holy cow, that's a big head. I love him so much.

The only thing that's changed is that the kid now leans on the pup instead of the pup leaning on her. That's friendship.

Well, this just about made me cry. Ugh, it's too cute. They're best friends!

20 years! That dog is ancient! What a special relationship. I love when old dogs have gray faces.

This change all happened in only 9 months. But you can tell it's the same dog because of that adorable face.

Dachshunds are so cute when they get old because they get all this extra floppy skin on their neck and chest. They're adorable.

Look at that dog cheesing for the camera. He knows he raised two nice boys.

Capone is a great name for this pup! He looks all tough now, but he's still got those sweet, puppy-dog eyes.

Still got their favorite nap positions. You can tell that the dog is in heaven because she's so floppy and comfortable.

This whole family grew up together. I bet that beagle is very proud of her human siblings.

Winchester the Great Dane is only five months old in the second photo. In another five months, you'll only see his tail.

Look at these two! They're inseparable! I bet they love to nap and play together. This is the reason to have puppies and kids at the same time.

You can tell that this dog has lived a lot of life and learned a lot about his human. They are clearly bonded for life.

First of all, Koda is gorgeous. His friendship with his human is beautiful. And that window/nook situation is to die for.

Sure, Domino is 10 years older and wiser, but that doesn't mean he can't still make silly faces for the camera with his favorite human!

Look at the growth progression of this pretty pup! Bernese mountain dogs can look so different as puppies and adult dogs.

Look at that dog's piercing blue eyes! These two make quite a pair.

Eleven years later and this dog is still an expert at posing for photos. In fact, now she's found her perfect angle.

Once the bos, alway the boss : aww from aww

It's amazing how much Huskies' faces can change when they get older! As puppies, they always look angry.

Before and after deployment

You would think that maybe a pup that's grown that much wouldn't remember his owner, but he's clearly so happy to be back in that human's arms in the second photo.

Look, they both learned valuable lessons in these fourteen years about love and loyalty and getting better haircuts.

$8.46 $6.77
Buy Now
See More Deals
We hope you find these deals as awesome as we do! Just an FYI: we may receive a share of sales from links on this page