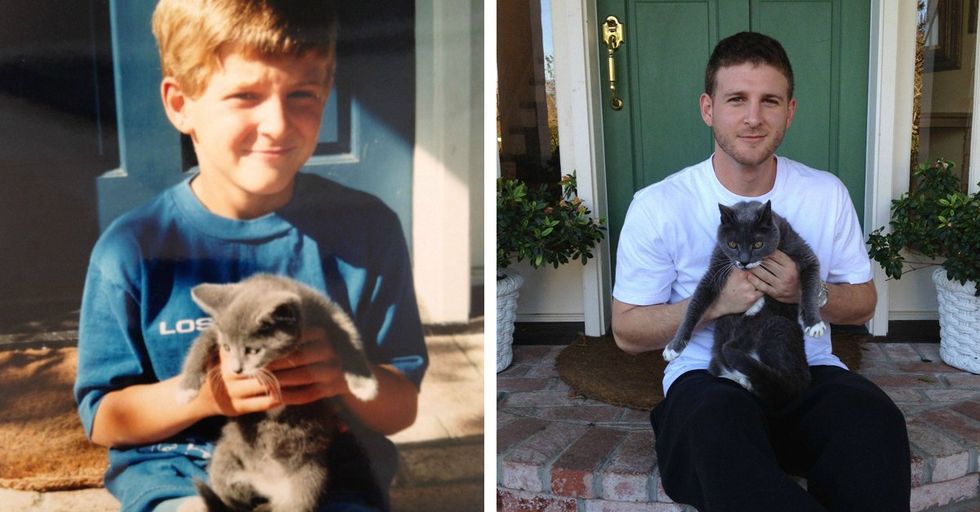 Cats are a unique kind of pet. They’re extremely independent, but when they’re ready for your attention, you better be ready to give it. They’re obsessed with cleaning themselves but also terrified of water. They slink around, sleep, and eat all day, but also somehow possess an air of pretentiousness typically only seen among classic royalty.

Though they’ve been domesticated for centuries, cats still carry themselves like the kings of the wild they were born to be – and those claws can still come out if you accidentally cross a boundary. Cats’ strong personalities are probably why many pet owners are avowed "dog people." But anyone with a cat knows better, especially if you’ve been blessed with the opportunity to raise your whiskered friend since it was so small it could fit in the palm of your hand.

There’s basically nothing cuter than a precious tiny kitty, but as time goes by those babies grow into the goofy, complicated cats we can’t live without. Here are some extremely wholesome kitty before-and-afters that’ll make you want another one, even if they do leave hair on literally every item of clothing you own.

As a kitten, this little angel could have been crushed by a keychain-sized stuffed animal.

Now that same toy is the size of its paw, but it’s still as comforting as ever. Why am I already crying?

Or they don’t care. I mean sure, this purrfect little creature still technically fits on a shoulder, but barely.

Not matter how big they get, or how inconvenient that spot might be for the cat and its loved ones.

But, because we love them, we make accommodations.

Like keeping an old shoebox for years because that’s where it likes to sleep. Marie Kondo would be furious.

Oh, did you want to sit in your office chair and get some work done?

Sorry, I have this space booked for the rest of my life.

This cat used to live shyly in the corner.

But it looks like it grew specifically to fill the dimensions of this guitar case. Just amazing.

The favorite place can NEVER change.

And don’t bother saying it doesn’t fit, you’re wasting your time and embarrassing yourself.

Um, this cat knows its angles and has its own little sofa?

Sometimes a cat’s favorite spot is in its family’s arms.

Just kidding, this cat clearly jumped away as soon as this photo was taken.

Baby kittens will look at you like you’re the most important thing in the world.

But teenagers can have such an attitude. This grown-up cat looks like it just said, “Nothing," after its mom asked what it learned in school that day.

Even if they do get a little testy at times, age can really do a kitty well.

Like with this cat, who went from rescue runt to king of the camera bag in six months.

Some before and afters really tell a story.

This cat looks so proud of itself for conquering that chair.

And some before and afters are inscrutable mysteries.

I mean obviously this is heartwarming, but why was he reading a book on the top of a ladder in his driveway? I need so much more context.

Sharing a lifetime with a cat is truly special.

18 years later and the bond seems just as strong between these two.

But a lot of change can happen in a relatively short amount of time, too.

In eight months time, this little guy went from a cuddly kitty to a confident fully grown cat. Still loves that stuffed animal though.

Is this a toy that expands in water?

Apparently, this cat doesn’t care if it gets wet, but I’m not going to test the theory because I value my life.

Cats need to be in the most inconvenient spot at all times.

You might be gasping for air with an entire cat pressed up against your face, but they’re finally comfortable.

Seeing kids and cats grow up side by side is pretty dang heartwarming.

But then again, really any time a cat will chill with you long enough for a picture is heartwarming.

Please accept my sincerest apology for that pun and just enjoy this special photo of a boy and his cat.

The 11-year bond is real between these two.

Look how small that little kitty used to be! Yeah, so what if I’m crying again?

Ok, cats can sort of be little demons sometimes too.

But that’s part of why we love them. I can’t really explain why. If you know, you know.

Their unique cute-but-psycho brand is what compels cat lovers to pour their heart and souls into rehabilitating cats in need.

With a little TLC, a rescue kitty can be just as bold and cheeky as any other cat.

Adopting a rescue can change its life.

You can see really see the difference in a rescue’s then-and-now pictures.

You should probably grab a few tissues now.

This little guy was skittish and suspicious, and how he hogs the entire bed. I just love a happy ending.

The bond with an adopted cat is especially strong.

Sometimes it’s hard to decide who rescued who.

Hold on, didn’t I just see this cat?

No. That was Walter, this is Brimley. Obviously. Please keep up.

Because when his family found him, he was no bigger than the famous little white mouse.

If you think Stuart Little’s before-and-after is impressive, meet Ernie.

This brave little kitty was freezing in a car wheel well with an eye infection and a broken nose when he was rescued. What a trooper.

You can really see the transformation in this little rescue.

One month in a loving home, and Madam Monroe is already comfortable enough to let that goofy tongue hang out for all to see. Incredible.

As much as we all love a small, precious kitty, every cat has to grow up someday.

So remember to take as many pictures as you can… or at least as many as they’ll hold still for.