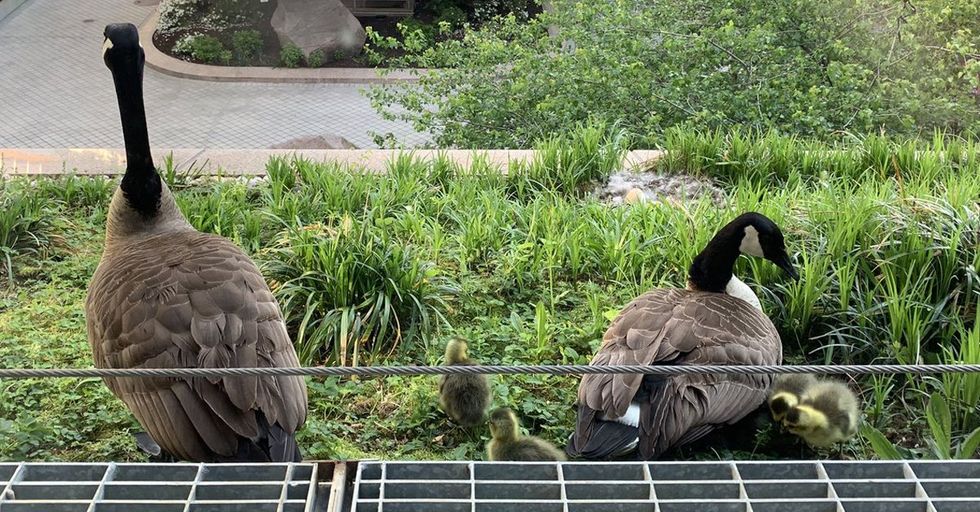 It's spring! Finally, the weather is getting warmer, the trees are bursting back to life, women are attempting to figure out if they can wear a romper or if it makes them look like a giant baby, and animals everywhere are doing what they do: making little animals!

If you're a goose (which if you are reading this, you probably aren't, but I'm not going to make any snap judgment about goose literacy), spring is the time you need to settle down after all that migrating and pick a place to lay eggs.

Choosing a nesting site is tricky business: too open and your eggs could be in danger, too high and your chicks could fall once they're born, too busy and people could disturb your family.

But a pair of nesting geese in Washington, DC happened to pick a pretty perfect place to lay their eggs: on a balcony at the National Geographic building.

If you're going to raise a family of baby birds somewhere human beings won't bother you, a museum and office building devoted to nature is pretty much your best bet.

Ok, quick review: what is a goose?

Geese are like ducks, but longer and scarier. The geese that we are talking about in this article are Canada geese. They can be found in every US state and Canadian province.

They can also be found in the movie Fly Away Home.

They are natural stars.

Unlike most Canadians, though, they are not always polite to strangers.

If you've ever gotten near one, you may have been hissed at. (It's terrifying).

But they are nice to each other.

In fact, most Canada geese mate for life with just one partner. Goose love is beautiful.

Canada geese usually like to nest on the ground, close to water.

Their nests are always found 150 feet or less from a body of water. But occasionally, the geese nest up high instead of on the ground.

This was the case for pair of geese in Washington, DC.

The geese chose to nest on a third-floor balcony that just happened to belong to the National Geographic offices.

Rachel Bale, an editor at Nat Geo recently tweeted about the geese that decided to start a family outside her office's window.

Bale writes about animals for National Geographic, so she was basically the perfect person to tell the geese's birth story.

Rachel tweeted that usually, a pair of ducks make a nest on the balcony, but this year, some geese took the spot instead.

The geese were in a spot that their nest was easily visible. Perfect for some up close goose-watching!

These small children seem to worship them as gods.

Nat Geo set up a live stream of the goose nest, and even blocked off space for the family.

The baby geese were finally born at the end of April!

The goslings have hatched! All six were born on Saturday. They're still up on the ledge, and @DCCityWildlife is sta… https://t.co/aWCHA4vdoX
— Rachael Bale (@Rachael Bale)1556541720.0

A baby goose, by the way, is called a gosling. (Like Ryan).

A male goose is called a gander.

And a group of geese is called a gaggle!

The family seemed to be doing just fine, but Nat Geo employees were worried it might be hard for the babies to get down from the ledge.

Canada geese usually make an nest on the ground, but their goslings are capable of falling a couple stories safely.… https://t.co/LiyiFacPt7
— Rachael Bale (@Rachael Bale)1556541820.0

Geese aren't always the smartest when it comes to building their nests. Although goslings can fall from a significant height without hurting themselves, sometimes geese build nests too high and don't consider how their babies will get down. (Being a new parent s hard, maybe you've been there.)

That's where this story got really fun.

Now the Nat Geo employees were stuck with a dilemma: they knew the nest was too high for the goslings to jump from, but how to move the babies safely without angering their parents or hurting them?

They tried to lower the chicks down the side of the building.

But when that didn't work, there was only one option left...

Can you guess what it was?

I love this so much.

The parents look like they are branch managers visiting the office for the day to make sure everything is running smoothly.

Everyone is so excited.

And then, of course, they had to ride the elevator.

The geese do not seem impressed by this strange moving box. But not to worry, they will keep it up with their wings.

Did they bring their ID badges, though?

Eventually, they made it outside.

They seem grateful, I think.

And then they went for a family swim in a fountain.

If you aren't tearing up by now, what is wrong with you?

The geese couldn't exactly live in the courtyard in the middle of downtown DC, though.

So they still were going to need help finding some better real estate.

They worried that the geese would try to walk through traffic to get to a nearby park, so they escorted them yet again.

A few hours later, @DCCityWildlife came to escort them to Constitution Gardens, a mile away. They were going to end… https://t.co/wmDNRZbgQM
— Rachael Bale (@Rachael Bale)1556659207.0

These geese are basically the Kardashians.

The geese were likely not psyched about their babies being cargo yet again.

But it was for their own good.

Finally, the geese were released at a pond.

.@DCCityWildlife walked them down to a wide open area with lots of water, where they’d be much happier https://t.co/JJKpWaYJQ2
— Rachael Bale (@Rachael Bale)1556659559.0

Where they could start their new lives as a young family of eight.

How cute is this?

You have to love a happy ending. (And a video of a goose in an elevator).

The goose story was inspirational.

I would watch the video of them running to their parents all day.

Hopefully, this goose story made your day!

If you still can't get enough, read National Geographic's story about the geese!