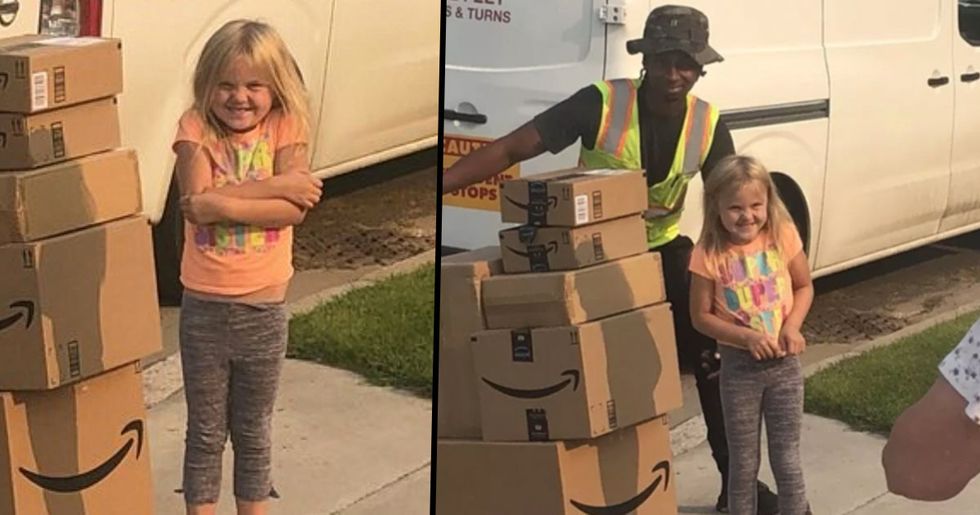 Adorable Scammer Orders $350 Worth of Toys on Mom's Amazon Account

Whether it's stealing the last cookie from the jar and profusely refusing any involvement or pretending to be asleep when in fact, they've been up for 2 hours on their phones - kids are pros at jibing their parents. Or at least trying to, anyway, because most of us see right through their little falsehoods.

And with the rise of social media and online shopping, we've all heard of times in which kids order something on their parents' Amazon account, or buy that "free" upgrade on the latest gaming fad (Fortnite...we're looking at you!). But, most of the time, it's an innocent mistake that's caught just in the nick of time.

But this couldn't be further than the reality for the mom of an adorable 6-year-old who is quite literally a scamming pro, after ordering over $300 worth of toys on her mom's Amazon account.

The sneaky splurge was part of a well-hatched plan from the little girl, whose scam was so elaborate that she would fit in well with Ocean's 8.

Just wait until you see the hilarious pictures...

Kids regularly get up to no good.

They test boundaries and our patience on a daily basis. It's all part of the joys of parenting.

But most kids haven't exactly perfected the art of covering up their tracks.

Whether they've broken something and hid it in panic or raided the snack cupboard right before dinner... we often see straight through their cover stories.

But it's all part of growing up.

Just like their first steps, first smile, or first word, their first brush with fabrication is somewhat of a weird kind of milestone.

Because, let's be honest, their "scams" aren't usually very elaborate.

Which is why we always catch them out. And watching your kids make up some far-fetched story to protest their innocence makes for a lot of laughs.

But one 6-year-old is proving to be quite a scamming pro.

This little girl is outshining her amateur peers by hatching quite the genius plan to get some toys out of her mom.

Kaitlin from Utah managed to order $350 worth of toys on her mom's Amazon account without raising suspicion.

For Kaitlin's birthday last year, her mom let her order a Barbie doll on Amazon. Which she did under the watchful eye of her mother, who is obviously very clued up on the fact that kids can get carried away, so wanted to ensure that Kaitlin did only order the Barbie.

This proved to be a huge mistake.

At first, the 6-year-old stuck to her word and simply ordered the Barbie. But it wasn't long before she executed her elaborate plan...

Kaitlin wasn't satisfied with just the one Barbie doll.

So she asked her mom if she could log back in to track the package to see when it would arrive. She's just a little girl who can't wait for her present to be delivered, right?

Well, this was all part of her scheme.

Because when the Amazon order arrived the next day, Kaitlin's mom was stunned to see several boxes turn up with the driver. That seems like an awful lot of packaging for one Barbie.

Turn's out, Kaitlin had ordered dozens of toys on her mom's account - amounting to a whopping $350.

So it seems like the 6-year-old discovered the "add to cart" button and utilized her unsupervised access by ordering boxes upon boxes of toys and video games.

"They just started unloading box after box after box," Diyaolu told BuzzFeed. "Her mom went on her Amazon account and saw three pages of things she had ordered. "She knew exactly what she was doing when she did it," said Diyaolu. "I was so surprised that a 6-year-old knew how to do one-click, next-day shipping."

That's certainly not the face of a child who made an innocent mistake.

The little girl even posed with the delivery driver.

It may be all smiles in the snaps, but her older cousin has said that Kaitlin didn't get to keep her massive haul, except for the Barbie. "She did not get grounded, but she does not have access to the internet for a month," she explained. However, in a turn of events, Diyaolu later updated Twitter, writing: "Kaitlin chose to donate all of the toys to the Children’s Hospital where she stayed for a week when she was a baby! "She wanted to give a little joy to those who aren’t well."
How sweet?!

Nevertheless, the scam has been soliciting some hilarious responses online.

Some are comparing the 6-year-old to the famed "Joanne the Scammer."

Other moms took to Twitter to write that they've raised fellow scammers, too.

Although, to be fair, this mom seemed to get quite a good deal out of her unfortunate situation. Though some of us have raised some serious scammers, there's no doubt that most kids can be brutally mean to their parents. And while it may not be a barrel of laughs for their parents, hearing about their crushing insults makes us all feel a little bit better about our own encounters with sassy little ones. Keep scrolling to read about twenty times that toddlers burned their parents with their ruthless, but hilarious, insults.
20%