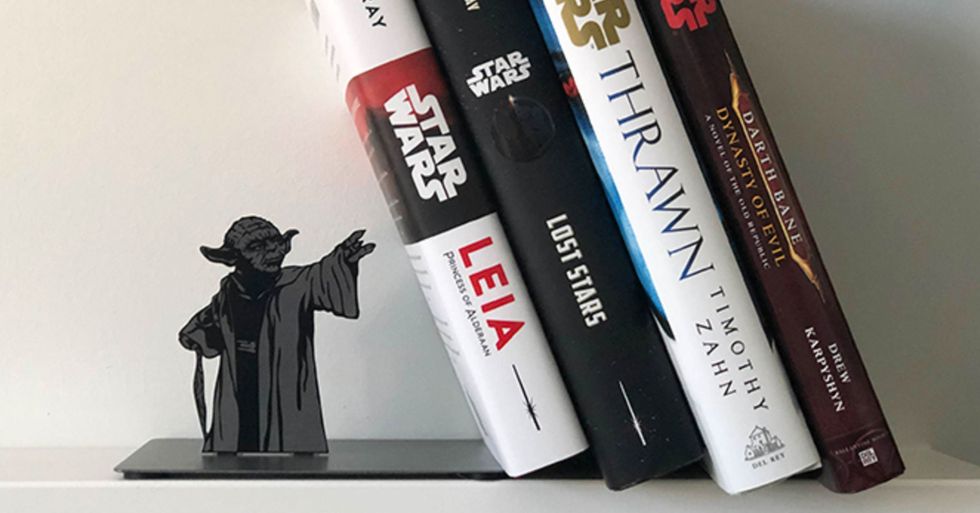 Adorable Yoda Bookends Use the Force to Hold up Books

The world may be gushing over baby Yoda, but there's no denying that the original Jedi Master remains as one of the most iconic characters from the Star Wars franchise.

And for those who are a firm fan of Yoda, you're in luck, as you can now buy a bookend featuring the legendary character. Although, this is no ordinary bookend...

This will make the perfect gift for any Star Wars fanatic in your life.  Keep scrolling to take a look and to find out how you can get your hands on one.

The first film, now known as episode four, was followed by 2 sequels. These 3 movies are now known as the original trilogy.

And who can forget Rise of the Skywalker?

The movie, which hit theaters last month, caps off the decades-long franchise.

But there's one fact that still remains...

While the world is currently obsessing over baby Yoda thanks in no small part to Disney's The Mandalorian), the original Jedi Master will always one of the most legendary characters to come out of the franchise.

Master Yoda is truly a beloved part of the Star Wars universe.

The small but wise character has become something we all associate with the iconic saga.

And now you can pay homage to the iconic character with a newly released piece of merchandise.

And now fans are desperate to get one of their own.

We need this in our lives.

It might not hold a ton of books, but it certainly makes a cool gift for the Star Wars fanatic in your life. Keep scrolling to see how you can get your hands on your very own.

But this bookend is unique for one huge reason...

The slanted design gives the effect that Yoda is using the force to do all the heavy lifting.

And we have to admit, the effect is striking.

The bookend adds a little bit of quirkiness to your home decor. Keep scrolling to see the end result and where you can buy.

And due to it's one block color...

Fans of the Star Wars universe can let their geeky side out without ruining the aesthetics of their home interior.

The Yoda metal bookend is available to buy from Hallmark and will set you back $19.95. For more Star Wars related-news, keep scrolling to learn about which Star Wars actor recently came out as gender fluid.