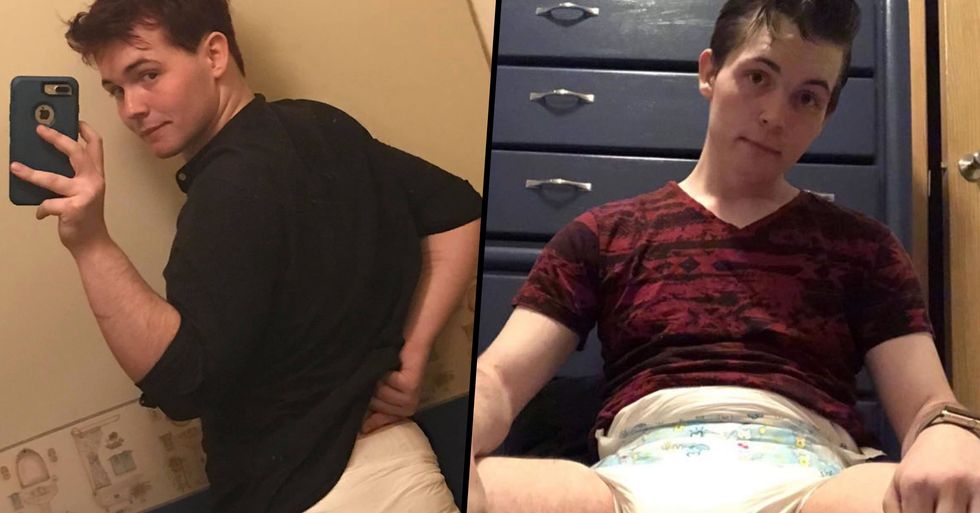 "Adult babies" are a thing and they're living among us right now. They could be your neighbor, your friend, your mailman, who really knows?

Well, one man has been struggling to find work after his employer fired him for turning the office into a playground...

What are adult babies?

Being an adult baby requires a lot of dedication, and the reason why people do it varies significantly.

Most adult babies wear and use diapers, as well as enjoy being treated like a child.

A common misconception about the fetish is that it's purely sexual, although many individuals who are active in the community disagree.

There are even stores dedicated to adult-sized baby products here in the US.

Allowing people to buy all their essential baby clothing but in adult sizes.

But why do they do it?

Well, it's not one size fits all when it comes to the "adult baby" community.

The reasoning behind why fully grown adults feel the need to act like a baby is different for everyone.

Some find it healing and a way of them dealing with past childhood trauma.

While others use it as an escape, a way to relax and switch off from the pressures of being an adult.

And surprisingly, it's a lot more popular than you might think.

One man, however, has been struggling to keep up his baby lifestyle while working a full-time job.

As you can imagine, the diapers are a little off-putting...

Damien Turner from West Virginia was recently fired after his employers found out about his strange obsession...

Being part of the Adult Baby Diaper Lover (ABDL) community.

Damien has also lost friends due to his lifestyle.

Although nothing has stopped him from being an adult baby.

He gave some insight into his own reasons for being part of the ABDL community...

"Diapers are very convenient, comfortable, and cute. It’s a very nice lifestyle and I wouldn’t want to do anything else. Dressing and acting like a baby gives off a very calm, relaxing, safe vibe. It’s almost as if you were back in preschool without a worry in the world."

This "passion" seems to have taken over his life.

Is it really worth it?

"Employment is hard. I’m constantly in and out of jobs. Sometimes my employers find my pictures online or just can’t put up with the fact I’m wearing a diaper and acting childish in the workplace."

People aren't very accepting of his way of life.

In fact, he has recieved a lot of negative comments.

Damien used to work in the catering industry and was always open with co-workers about his lifestyle.

And his social media presence isn't any different.

Damien managed to save up money while he was working.

And is living off that while he searches for other jobs.

This isn't just a phase, the twenty-eight-year-old has been doing this for years...

It all started in his teenage years.

But the interest started much earlier.

"It’s something I’ve always been into since I was a kid. If I really had to pin it to something I’d say episodes of Spongebob or Tom and Jerry where they are wearing a diaper for a gag or throwaway joke. I found it very appealing and have pretty much been wearing them since I was 16."

He tricked his parents at first...

"I lied and told my parents I had an incontinence problem at the time so they would buy me some. Eventually, I told them the truth. My parents don’t really mind at all. I’ve never had a problem with them when it came to my lifestyle."

His family has been accepting of Damien's lifestyle, but people online have been the complete opposite.

He said that other people find it "hilarious," with some even making memes of him. "It’s kind of embarrassing but it doesn’t really bother me."

The ABDL community and his family continue to support Damien, even if the rest of us can't quite understand why.

Keep scrolling to see what non-Americans find weird about us... You'll be totally surprised.