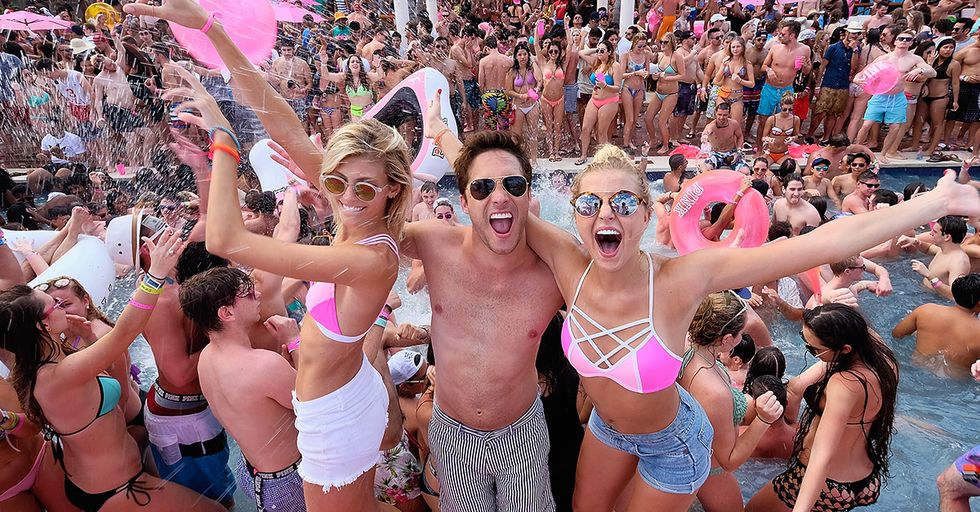 When you're a kid, you think you know everything and are basically invincible. It isn't until you get older that you realize you are probably pretty lucky to be alive after all the dumb choices you made as you were growing up.

And then you have your own kids and suddenly find yourself being the one that makes the rules, rather than being the one who always tries to break them.

Suddenly, you hear yourself saying things like "Because I said so, that's why!"

It's the circle of life. In a recent AskReddit thread, people shared the things they did as teenagers that they are definitely not going to let their own kids to. Their answers are very enlightening.

Starting with the most obvious one:

Set fire to EVERYTHING. –peanutismint Yep, that seems like a really good idea, actually.

On the other hand, it's important to let kids be kids.

Get a job after school to help pay the mortgage. I will manage my finances better than my mom did.–insertcaffeine

Remember that you control your destiny.

Not taking control of your own life. I was very much a passenger for my own life until late college years. I have since wised up and started moving my life to where I want it to be. I am not sure how I will do it, but I really want my kids to have a better grip on their lives. –cbijeaux

Bully other kids. I had fewer regrets in my life than being an asshole to a kid in my class for no reason. –UdotJdot This next one might hit a little close to home for some of us...

Don't grow up too fast.

Regret being a kid, I make sure to tell my daughter to enjoy being a kid don’t worry about growing up to fast. I was working at 12 years old (during summer breaks) with my dad trying to earn money to buy useless sh*t. I won’t let my daughter do that. –RiverDonkeey

Think long and hard before joining a dangerous sport.

In a freshmen football game, I was the quarterback and I was running and got to the corner of the 1-yard line. just before I went out of bounds I made a last attempt to get the ball in the end zone. I remember seeing a short defensive back and thinking, "Yeah I can get in the end zone, he won't be a problem at all." That's the last thing I remember. He speared me with all his little strength, placing his helmet just under my chin knocking my helmet off. From what I was later told, I tried four times to stand up but couldn't and had blood all over my white jersey from the gash in my chin (which became visible scar). My parents were upset (especially my mom), but the coaches reassured them I was fine and I played the rest of the game (which I don't remember). I love football and my wife doesn't want our son to play. Whenever I try to make an argument, I remember this and see her point very clearly. – screwtapwzero

My daughter isn’t going to know how much we’ve put into her education fund. We’re saving for everything. She’s a year old, I opened up her RESP when she was a few weeks old and have been saving every month. When people give us money for her baby shower, Easter, birthdays, Christmas and whatever, I’ve been putting 80 percent into the education fund and 20 percent toward a book or toy. I plan to continue that. She has no shortage of books, stuffies, and plastic crap. I’m going to tell her we’ve covered the tuition but she’s got to start saving for the rest and compete for scholarships. Then we’re going to have her put half of her paychecks away, but we’re actually just going to give it back to her. She’s getting the gift of education and a good work ethic. –aragog-acromantula

What was this mother thinking?!

When I was in high school my mom had a boyfriend (now stepfather) but every weekend she would go to his house and stay the night, thus leaving me alone. Overnight. I had boys over, I had parties, I had a short coke problem and my house was the perfect place to do all of these things. My mom never knew somehow... She wasn’t a bad mom, but I think at that time she just really wanted to be on her own and found happiness and peace when she was alone with my stepdad. Yea, definitely NOT leaving my kid unattended on the weekend. –littlemoon93

I'm still guilty of this one.

Sitting around doing nothing for like 10 hours straight. –ABSOLUTELY_BASED However, while you don't want your kids to sit around wasting their lives, you also don't want them to do what this next Redditor did...

Spring break in Mexico... I was 18 and in college but....oh dear lord that was insane. Wonder how we all made it back alive. No way will I let my kids do that. –toomuchtime80

One more time for the people in the back: Let kids be kids.

Get involved in my parents' finances and affairs. My parents dragged us into every argument, and always told us "we're broke, we can't afford that" (which made me super mad because dad was always buying car parts and mom was getting new clothes monthly but we could never get new clothes for school, let alone Christmas presents). I don't want to curse my kid like that. If we fight it's behind closed doors where they can't hear. And I'll just tell them "we can't have that right now." Last thing I want is for my kid to go to school and tell their teacher or friend that we're broke. –CottonCandyTacos

This could have gone horribly:

As kids, my brothers and I would wander into the pasture behind our house. It wasn’t just a few acres either, our landlord owned something like 90,000 acres of land behind our house. While we never wandered too far out, I would be comfortable saying we were at least 2-3 miles from the nearest home. We would always bring a saw, ax, knives, and flint striker, and would build multitudes of forts and clubhouses. Not that any of that is particularly irresponsible, I have to mention this is in West Texas during the summer so rattlesnakes were a real threat. There were also cattle in this pasture, all but two were very nice and friendly, of course, the bulls wanted nothing to do with us. The actual dumb thing we did was we loved to start fires as most boys our age did. We tried our hands at friction fires of all sorts and were very successful. Thinking back on it now, had one of us been bitten by a rattlesnake or started a damn wildfire, if we didn’t die, my parents would’ve killed us. –Robmathew

Smoking I guess. Mom is a smoker since she was 15 or so. She hated me smoking too and told me to quit. I told her I did but that was a lie. This was six years ago. I thought I loved smoking. Now I'm trying to quit it for good but having hard times. –wildpandda

Make sure they have a plan.

Not go to college. Spend their teens and early 20s doing nothing but drugs and working dead-end jobs. –NotGoodAtHiding This next submission is in a similar vein...

Nothing. Going to make sure my kids do more than nothing. Go to the stupid school dances. Join a sports team. Join a club. –XIGRIMxREAPERIX

My future teenagers will probably do some drugs and get drunk. I'm OK with this because it is very common and just a part of growing up. What I will not do is treat it like something they need to hide from me. I should have been killed at least six times when I was a teenager driving drunk. I could have ruined my life so many ways because I had to hide it from my parents. If my kids are drunk somewhere they can call me and I will go get them with no repercussions (unless it's a school night). If it's a school night "they gunna learn" what it's like to wake their hungover ass up and get to work on time wishing they could die. It will be an important lesson that will serve them well into adulthood. –ZealousidealIncome

It's amazing that anyone was ever able to successfully hitchhike.

Hitchhike. Not that anyone allowed it, my parents were somewhat disengaged or later, I was on my own without a license and needed to keep my job to pay for my apartment when I was 17. Priorities. –wakeupmaggi3

Actually, there were a lot of car-related activities that were pretty darn dumb.

I used to do stupid sh*t in cars. We used to car surf because Teen Wolf made it look so fun. We used to go "dipping." We'd get in the back of a pickup and the driver would go over road dips really fast. You caught some air and had to hold onto the roll bar or fly out of the bed. Used to jump off roofs. I don't know why. Basically Jackass before it existed. –ITworksGuys

I was allowed an insane amount of freedom growing up. Once I had my driver's license I would come home from school, drop my stuff off, and then tell my grandpa I was going out and wouldn't be back until Sunday. No questions were asked. I don't know if I can trust my kids the same way. I did some crazy things, but I feel as though my leniency was because I was pretty damn responsible even as an early teenager. –pbj986 Share this list with someone who has kids so they know what they have to look forward to!