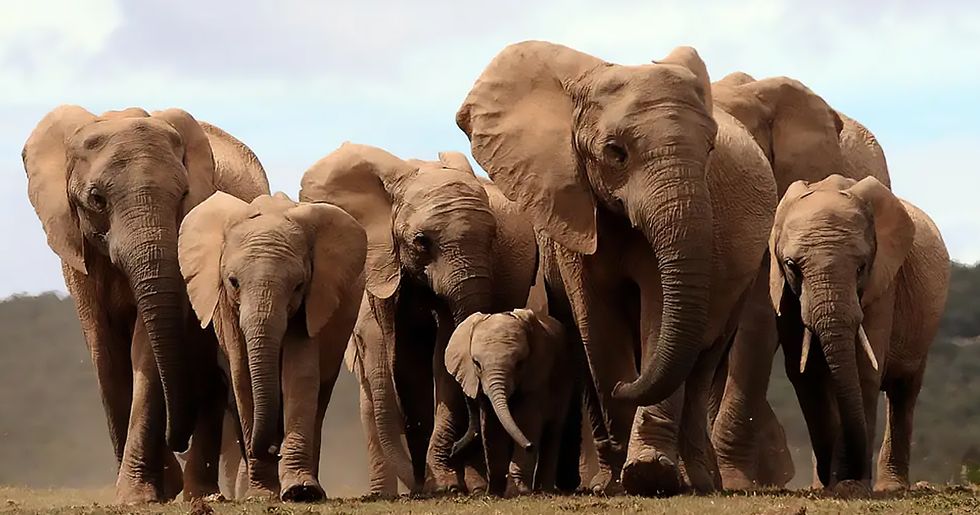 If your uncle is as much as a bummer as mine, he will argue with you for 45 minutes about whether or not evolution is real. "If we came from monkeys," he asked me one time while literally eating a banana, "why don't we have tails and pick bugs off each others' backs?"

The answer, of course, is that evolution doesn't work that way. Certain rare traits are advantageous against predators, and therefore having those traits give an animal a better chance of survival. Those traits, then, are more likely to appear in the next generation, and what was once something unusual becomes the norm. (We don't pick bugs off each others' backs because we evolved smart brains that invented showers, Uncle Jason.)

And it's easy to talk about traits that help animals survive against predators... until you yourself are that predator. Human beings have been hunting elephants for their ivory tusks for so long that evolution is taking tusks away from them. It's... well, it's pretty messed up.

How did we get to the point that nature has to account for our cruelty if elephants are to live? Let's start at the beginning...

Elephants are some of the most beautiful and powerful creatures on Earth.

You can't help but respect the elephant. Like Superman, they're strong enough to destroy the world, but they're too good to do so. Unlike Superman, though, elephants have decided to just sorta hang out and shoot water out their long noses at each other. (Which is much cuter than that "save the world" BS Superman is always pulling.)

God bless you, early Disney, for making a movie where an elephant can fly with his big, silly ears. It truly is one of our nation's most adorable cultural touchstones.

(And our most shrug-worthy Tim Burton movie.)

Man, that Tim Burton Dumbo just came and went, didn't it? Danny DeVito was even in it, and not even one of us cared. Who would've guessed? We all love Danny DeVito! Right?!

Plus, elephants are crazy horrifying without ears or a trunk.

GOOD LORD. I remember seeing that picture on Reddit something like six months ago, and it stuck with me. What other animal can both make you swoon and make you tremble?

And yet, humans continue to step to elephants.

Somehow, rich assholes are still allowed to hop in a helicopter and open fire on these beautiful animals from above. What kind of psychopath do you have to be to spend your vacation shooting animals when you could be getting a non-stop two week-long massage?

I'd like to see 'em try it without their fancy guns.

You know what they say — if you can't best a creature in hand-to-hand combat, you don't get to hunt them for sport. Sorry rich assholes, I don't make the rules.

These elephants are dying because their ivory tusks are so valuable.

According to Save the Elephants, a spike in Ivory poaching in 2009 lead to 100,000 elephants being killed between 2010 and 2012. And that comes after the total forest elephant population fell by 62 percent between 2002 and 2011. Obviously, ivory poaching is a massive problem.

Most of this poached ivory is going to China and Hong Kong.

Despite a ban going into effect in 2017, a thriving black market has made China the world's top destination for ivory. A study from National Geographic found that 69 percent of people in the US and Asian countries see owning ivory as "a status symbol". So... that's not great.

Plus, a lot of people in China don't realize the extent to which the practice of ivory poaching is devastating these noble animals.

According to The Elephant Society, 70 percent of ivory consumers in China and Hong Kong believe "an elephant's tusks would grow back naturally." Fellas, it's not a haircut.

Because of all this poaching, elephants are starting to evolve.

I mean, this evolution has been happening over a long time. It's not at all like a Pokémon evolution, especially in that it is not at all cool or fun.

All of a sudden, elephants are now much more likely to be born with no tusks at all.

The elephants with shorter tusks, or no tusks at all, were more likely to avoid attention from poachers...

Those tiny little tusks made a number of elephants practically invisible to poachers, in the same way wearing a wedding ring makes you invisible to single ladies out looking for a man.

... and are therefore more likely to reproduce.

You know them hot single elephant ladies be lookin' for an elephant man with no tusks! They want they babies to be spared, gurl!

This sucks. Elephants need those tusks.

Tusks help elephants hunt and keep themselves alive. They're also incredibly effective defensive weapons against other animals. And finally, tusks look just so sweet. I see tusks on an elephant and I'm like, "dammmmn dude."

I'm honestly so angry that ivory poachers got us to this place.

It makes me understand protesting. I want to get a bunch of signs printed and hit the streets! If someone out there ants to do the graphic design, I can go to Kinko's!

Why exactly is ivory poaching so prevalent?

How are we at a point where there are entire stores devoted to ivory in China? How do you pay rent on a storefront only selling ivory? (Incidentally, I have the same question about all those crystal shops in downtown Eagle Rock.)

Turns out, China has a truly toxic relationship with ivory.

In addition to the status symbol issue we talked about before, there are a number of ways ivory has seeped its way into Chinese culture and lead to the epidemic in ivory trading we see today.

The country uses ivory in medicine.

Honest to god, ivory is often ground up and used in medicine, according to KCET. Often put in ulcer medication, there is no evidence to suggest it helps in any way. Furthermore, there are ancient stories of ivory being used to test food for emperors, as it would supposedly change color when sprinkled on a poisoned meal.

And ivory carving is officially part of Chinese culture.

KCET also suggests ivory carving is a big part of the artistic scene in Hong Kong, with ivory carving being added to "official Intangible Cultural Heritage register, along with opera, kung fu, and acupuncture."

Look, we all know ivory poachers are evil.

Not one of us would ever travel down to Mozambique, harm the most beautiful thing we'd ever dared lay eyes upon, and slaughter it so someone could grind it up and put it in some ulcer pills.

(Unless, of course, you're evil yourself.)

The Trump Administration just made it easier for trophy hunters to do their despicable thing. Don't forget, in 2012, Donald Trump Jr. dusted up some controversy when " target="_blank">TMZ reported on a picture of the future First Son holding a severed elephant tail.

But elephants aren't the only animals humans have caused to evolve.

(Gonna be honest — some of these are sick-ass Pokémon-style evolutions.)

Mice are developing an immunity to poison.

We've been poisoning cheese for so long that the mice living in our walls are starting to build up an immunity to it. I guess we'll have to go back to our old standby — that spring-loaded traps that haven't been seen since they were snapping on burglars' fingers in the 1990 film Home Alone.

You get a new spray, they learn to deal with it. You get a new heat lamp, they crawl deeper into the mattress. We get thinner mattresses, and they leave us alone... because by making our beds so uncomfortable with those thin-ass mattresses, the bedbugs have already won.

And the poor tawny owls are even changing their colors to adapt to climate change.

You're telling me the mice improved their constitution, the bed bugs got swole, and the poor tawny owl just got to become brown? I suppose that's chill since our warming climate has made it more likely they'll be in warm climates and therefore more able to blend in with their surroundings when they're brown and not grey, but still. It's kind of a crummy change.

But at least those evolutions have a chance to give animals a fighting chance against humans.

If we're going to entirely alter their habitat, I think animals should evolve to a place where they can give any human they come across a solid left hook right to the kisser.

Taking away the elephants' tusks is just... I don't know...

Yeah, that's it. Entirely pointless. We don't get anything of substance from ivory. In fact, the first thing I thought about when I pictured something cool I could have with ivory were the keys on a grand piano, and I was immediately like "I would rather have a Casio keyboard because they have cool sound effects that regular pianos don't."

So let's all tackle this problem together.

Come on everyone! There's something we can all do to help the elephants! You don't want a strange evolution of a perfect animal on your hands, do you? I know I don't!

Throw away your ivory.

That's the first and most obvious step of all of this — we gotta take all the ivory we've collected over the years, crumple it up, and throw it in the trash.

And get all those ivory dealers out of your life.

(Listen, obviously I don't know how to actually save the elephants, but if you wanted to make a donation, Save the Elephants looks to be a pretty good place to start.)