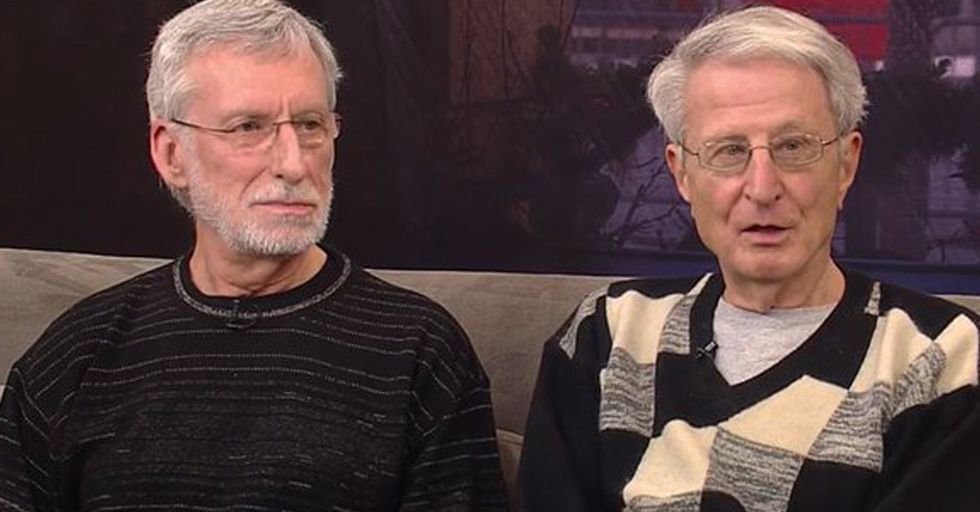 After Almost 50 Years, This Gay Couple's Marriage Has Finally Been Made Official

Even though we live in 2019 and things are, in ways, more progressive than they were years and years ago, there's still a long way to go. It's encouraging to see change and feel like the world is moving forward, but it's also easy to get discouraged when you flip on the news and realize the state of the world. It's like we're in a constant loop of terrible things.

I'm not trying to be super negative here. Just being honest.

But here's the good news: throughout the muck and the mire of depressing news stories and the idiocy of our current presidential administration, there are tiny miracles. Tiny nuggets of happiness that we can hold onto and think, "Okay. Maybe the world isn't so bad after all."

I know I sound dramatic, but I think sometimes we have to cling onto these tiny happy moments and celebrate the wins. It'll get too depressing and hard if we don't lift up the positives in our world.

For instance - after almost 50 years, a gay couple's marriage has finally been made official. And that is something to celebrate.

Their love story is one for the books. Seriously, you'll probably need tissues.

The couple met when they were in graduate school in the late '60s at the University of Oklahoma.

According to NBC News, the Minnesota couple is thought to be the longest-married, same-sex couple in the United States. But their relationship and marriage hasn't always been easy...or recognized legally.

Back in 1971, Michael and Jack decided to apply for a marriage license.

They applied for a marriage license in Blue Earth County, Minnesota, and the clerk issuing the license didn't realize that one of the people on the application was male.

The clerk issued the license but didn't officially record it.

So technically, they weren't legally married, despite following all of the necessary steps. "We knew from day one when we were legally married in 1971 that we were right — that we had followed the law to the letter," Michael told NBC News.

The McConnells first applied for a marriage license in 1970 in Hennepin County, Minnesota.

But they were denied. The couple's case was well-known, and they brought it to the Minnesota Supreme Court.

But because this was the midwest in the '70s, the Minnesota Supreme Court didn't overrule the county's denial.

But the McConnells didn't give up. They appealed to the Supreme Court, but their case was dismissed.

But there had to be another way, right?

The McConnells found a way around it. Jack decided to change his name to "Pat Lyn," since it was gender neutral. Then, Michael went back to Blue Earth County to apply for a license again, only this time he was alone.

The hiccups on the journey to marriage didn't end there.

Because Minnesota's laws do not explicitly state that two people of the same gender can't get married, Michael and Jack felt that their marriage license was valid.

But then it was discovered that "Pat Lyn" was actually a male.

The county attorney told the court to not actually file or record the marriage license. So now the McConnells had no proof of marriage.

Because of this, the couple couldn't collect any social security spousal benefits that they were entitled to.

When same-sex marriage was legalized by the Supreme Court in 2015, it didn't matter - their marriage was still not legally recognized.

Despite the hard journey, the couple has a happy ending.

Because in September of last year, their marriage was finally ruled, official. It's about time! A Minnesota court district judge ruled the marriage valid after decades since the McConnells first applied for a marriage license.

NBC News reports that the Social Security office let the McConnells know that they were finally going to be entitled to the social security spousal benefits. Hallelujah!

Talk about a long-awaited victory.

The McConnells and their fight to make their marriage legal is inspiring.

But the couple says that this win is about so much more than just themselves.

“This just simply proves that the first same-sex marriage ever recorded in the public files of any civil government anywhere in the world happened in Minnesota," Jack McConnell told NBC News.

The couple wrote a memoir about their story.

It's called, "The Wedding Heard ’Round the World: America’s First Gay Marriage."

The couple is ecstatic that their marriage is finally valid.

“The bullies with power have been bullying us for all this time, and we won," Jack said.

It's a beautiful victory.

A Valentine's to Remember

The best part of it all? The McConnells received the letter from the Social Security office just a few days after Valentine's Day.

Talk about a celebration of love!

The couple will celebrate 49 years of marriage this year. That's an incredible feat.

Despite the long journey, the couple says they've always been proud of their relationship.

According to NBC News, Michael grew up in Oklahoma, in a conservative community. Jack was raised in a Catholic boarding school and was an orphan. Jack was always determined to find his person in life.

“I was going to find someone to grow old together with," Jack said. Cue the sobbing and weeping from all of us reading about their story.

Hope for the Future

They're hopeful about the future and progress being made for the LGBTQ community. Their life mantra? “Full equality for all people with no exceptions, no excuses."

A beautiful way to live life.

“That doesn’t matter what color your skin is, what your ethnic background is, what gender you are, how you identify yourself or anything," Michael told NBC News. "It means full and absolute equality for all people."

On Twitter, many people are supporting the story and the couple.

It's an inspiring message of courage and hope.

Their story is being covered by tons of news outlets.

Out.com reports that back when the McConnells got married in 1971, a Methodist pastor backed out of the ceremony.

But a man named Roger Lynn, another Methodist pastor, agreed to marry the two.

"It was very clear that these two people were in love with each other, and they were a good balance," Lynn said to BBC.

“Our marriage is all about the power of love," Michael says. “Sometimes it takes a while, but in the end, love always wins."

Their story is incredibly encouraging.

It's wonderful to see their love story being told.

May it never stop being a source of inspiration.

Love is love. Jack and Michael are proof that true love can go through hardship and still persevere.

Jack told LGBTQ Nation, "The ruling was a long time coming, but I knew the courts would eventually rule in our favor."

"It proves what I’ve always said. Jack and I are in our 70s, and we’ve been married almost 50 years," Michael said to LGBTQ Nation. Congrats to the happy couple. Share this with your friend who loves positive stories!