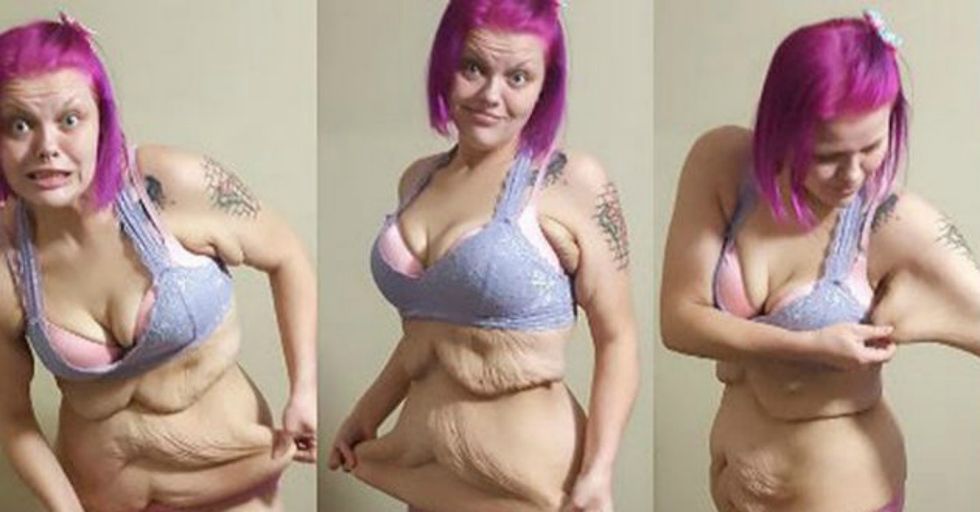 After Losing 186 Pounds, This Woman Now Deals With an 'Apron' of Excess Skin

This is twenty-four-year-old Kayla Butcher from Canada, and along with some funky fun hair, she has quite a story to tell.

It's hard to tell by looking at her now, but she once weighed 400 pounds. In the past year, though, Kayla has shed 186 pounds and shows no signs of stopping now. But there's a little bit of a problem...

She now carries a shell of excess skin hanging under her arms, along her thighs, and over her pants that she estimates weighs about twenty pounds.

"Everything is loose, saggy, wrinkly, and deflated," she said, referring to the excess skin on her belly as her "apron." "It hangs and moves around, and it makes me look and feel way bigger than I truly am."

Although Kayla was an active child, engaging in hockey, softball, track, and volleyball, she still gained weight due to her poor eating habits and an unstable home situation.

She was diagnosed with depression at age fourteen and began eating food to cope. "People like to say I made the choice to be fat on my own [but] this was definitely not a choice of mine," said Kayla, who insists stress at home contributed to her condition. "There were drug dependencies and addiction, as well as far too many issues between my parents that they did not keep from the kids."

She left home at sixteen, moved to a new city to go to college, and put on around 145 pounds.

The massive weight gain stopped her from playing softball, as she couldn't run to the bases. Her boyfriend also broke up with her and she failed two courses, causing her to lose her financial aid and drop out of college. In other words, she felt like she'd hit rock bottom.

Tired of feeling bad about herself, Kayla endured a thirteen-month pre-operation process to get access to a government funded gastric bypass program and had the surgery in 2016.

While it gave her the jumpstart she needed, every day is still a struggle. "Gastric bypass made losing the weight easier and more possible, but it's more a mind game than anything else," she said. "It's like quitting your drug of choice cold turkey." Her gastric bypass surgery was covered by the Canadian government, but cosmetic surgery to remove the excess skin is not. Is he were to get a tummy tuck and have the excess skin removed from her arms, legs, and breasts, she's looking at a $20,000 bill.

That's why Kayla recently set up a GoFundMe page to raise $10,000 for her procedures.

She struggles to hide her excess skin beneath her clothing — something she can't exactly do in intimate situations. "I am more self-conscious now at 189 pounds naked than I ever was at 376 pounds," she said. "I look and feel like a balloon that has lost all of its air a week after a party."

But she's doing the best that she can in the meantime and continues to be positive, inspiring others on Instagram.

"I want to be full of life and not watch it pass me by," she said. "A positive outlook can make all the difference."