After Roy Moore Refused to Concede the Alabama Election, J.K. Rowling Stepped in with the Perfect Response | 22 Words 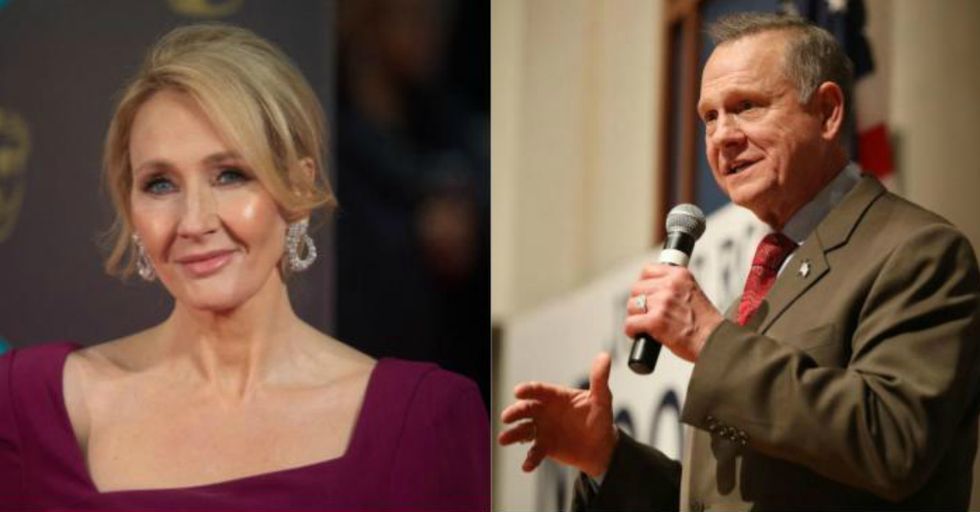 After Roy Moore Refused to Concede the Alabama Election, J.K. Rowling Stepped in with the Perfect Response

We all know that J.K. Rowling is queen of the Twitter clapback. No other public figure is as good at cutting pompous blowhards down to size as the mother of the wizarding world herself. And much to the dismay of many a conservative figure, Rowling often turns her condemning gaze to the world of American politics.

This week, her focus was on the United States Senate special election in Alabama.

American politics are a dirty game, and this year has been particularly fraught with backbiting, slander, and outright nastiness. Outside of the spectacle of Donald Trump, no political event has exemplified this quite as much as the U.S. Senate special election in Alabama, which has been notorious for its nastiness since late 2016.
A brief background: In 2016, Donald Trump announced that he was appointing Alabama's U.S. senator Jeff Sessions to the position of Attorney General. This meant Sessions' senate seat — that he'd filled since 1997 — would now be open.
The Governor of Alabama at the time, Robert Bentley, appointed Luther Strange, the Attorney General of Alabama, to fill the seat until the next election in 2018. Onlookers immediately cried foul because Bentley was in the middle of a scandal involving a married female advisor. "The appointment of Senator Strange smells to high heaven," said State Auditor Jim Zeigler.
Two months later, Bentley resigned as part of a plea deal involving ethics and campaign finance violations. The new governor, Kay Ivey, called for a special election set in November, so the people of Alabama could rightfully choose their new senator.

It soon became one of the most contentious political matches of all time. On the Republican side, Donald Trump – who was experiencing an acrimonious split with former advisor Steve Bannon – stumped for Luther Strange. Trump's infamous words during a speech on Strange's behalf sending the #TakeAKnee movement into overdrive.

Bannon, however, endorsed Roy Moore, who subsequently won the Republican nomination. For a while, everything was quiet. Then, allegations emerged that Moore was a known hebephile who had sexually assaulted teenaged girls, one as young as 14, and been banned from his local mall.
At this juncture, most politicians would throw in the towel— but not Moore. He vehemently denied the allegations and denied even knowing the women, although this claim was subsequently proven false. After some hesitation, Trump overcame his qualms and threw his weight behind Roy Moore, which lead the rest of the Republican party to do the same.

Democratic candidate Doug Jones, a civil rights prosecutor and activist, put up a good fight enlisting Democratic heavyweights like former Vice President Joe Biden and NBA legend Charles Barkley to campaign on his behalf. To everyone's surprise, Jones won. Even though Roy Moore had ridden a horse named Sassy to vote, and— despite the allegations — the majority of white men and women in Alabama had voted for Moore. Black women carried the day by voting 98% for Jones and lifting him to victory.

Let's make sure to recognize the real heros of the special election in Alabama: black women. Thank you all for keep… https://t.co/GmI8FcIOuM
— Trevor Register (@Trevor Register)1513173945.0

There was just one problem: Moore refused to concede. "When the vote is this close ... it's not over," he told supporters after Jones declared victory. "But we also know that God is always in control... We've been put in a hole, if you will, and it reminds me of a passage in Psalm 40: 'I waited patiently for the Lord,' and that's what we've got to do."

J.K. Rowling, of course, was not one to mince words. In a widely-viewed Twitter post, she wrote, "Narrator's voice: Roy was right. God was in control. What he didn't realise was, She's black," referring to the stunning percentage of black women who had voted for Jones and lead him to victory. The Lord does work in mysterious ways... or should we say The Lady?